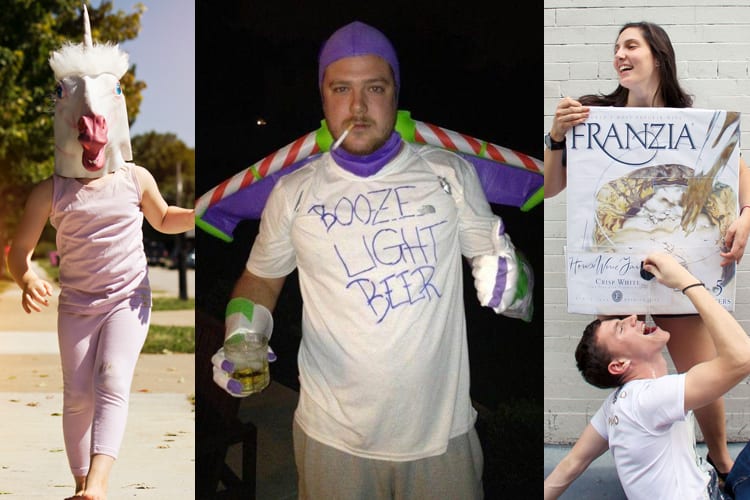 If you’re a Halloween nerd you’ve probably already started planning your costume and maybe even started decorating your house. For those who are less prepared, what are you waiting for? We’ve scoured the internet and have come across the most hilarious and NSFW Halloween costume fails so you know exactly what to avoid. You’re welcome.

We’ve also rated them from 0 being the worst costume ever to 10 being bad, but maybe not as bad.

Okay, admittedly these masks are pretty creepy but c’mon guys, 2011 called and it wants its memes back. As far as Halloween costume fails go this one isn’t so bad, especially if you’re going to go the whole way and get a buddy to be the back end.

Not bad but feels like we’re  flogging a dead horse… Get it? Dead horse.

Looking to meet the love of your life this Halloween? Nothing screams desperate like having “rub me” written on your wiener. This not-so-sexy outfit is bound to have the ladies screaming… with laughter or disgust.

And what’s with the jeans? Not even a pair of tights to complete the look?

Because the hat and jacket might at least be useful for another costume.

What the..? Did the person who made this watch Handmaid’s Tale? Or even, like, read a brief synopsis on Wikipedia? This Halloween costume fails to understand the point of Atwood’s chilling series even for a second!

Again, purely because some parts of this could be recycled for a decent costume.

If you’re the kind of person who grows a hipster beard ironically or thinks that Razor scooters are, like, totally the transport of the future then this costume (do not click link to buy unless you’re desperate) is probably for you. Or if your friends would describe you as “wacky” in a tired voice that lets you know they are tired of your bad puns and lame antics.

Guarantee that no-one will talk to you all night by yelling “I don’t give a guac!” at every possible opportunity.

But 2 of those points are because avocados taste pretty good.

This isn’t flying but it’s not falling with style either. Props to this guy for trying. Sort of. Good puns are always appreciated and this is 50% of that.

Lost one point for penmanship.

Be the hero of all of your14 year old mates this year by coming to Steve’s parents’ Halloween party dressed as… what? A woman with huge .., I guess.

Because at least the boobs are covered up unlike this one.

9.) Any variation on a Geisha

Traditionally, Geisha are artists who are highly educated in singing, poetry, dance and the playing of instruments as well as a host of otherskills and talents. They are a part of Japan’s cultural heritage and many of their arts are still practiced and cherished today.

What they aren’t is scantily clad girls in what appears to be cheap, knock-off Chinese brocade. Now, how do you say tacky AF in Japanese?

For at least knowing that other cultures exist.

While we’re on the topic of cultural appropriation, can we cut it out with these apparently sexy Calavera Catrina costumes now?

Keep the dress and use it for bit of private Halloween fun.

Eurgh. The only thing more vomit-inducing than bingeing on trick-or-treat candy is lame couple’s costumes. This Halloween costume fails on every front; pizza is neither scary nor sexy. To make matters worse, the costumes don’t even match! This company is clearly just hoping you’ll be too desperate to notice.

Do everyone a favor and put together a decent couple’s costume.

Even delicious pepperoni can’t save this failure.

We’ve all got that one friend who tries to use Halloween as achance to wear lingerie (note: if you don’t have that friend it might be you.) Sexy nurse has to be the most clichéd, outdated, frankly sexist costume still in existence. This one from Yandy is particularly bad and unimaginative. If you ever meet a nurse wearing a frilly tutu and satin gloves, she is not properly qualified.

Because the shoes are at least kind of cute.

If you are over the age of 6, this is not an acceptable costume. No I don’t care how cute and ironic you’rebeing, this is lazy work and you know it. The only exception is if you’re under 5 foot and can get away with trick-or-treating with the kids.

Lose one point for wrecking your good sheets.

If a friend turns up to your party wearing one if these with some black clothing it means one of four things:

1) They don’t care about your party and will leave early to go to a better one.

2) They don’tcare about your party and totally forgot about it until about 2 hours ago.

3) They are trying to hook up with someone at your party and thought dressing up would ruin their chances.

4) They are a robot imitating humans and, as such, are incapable of imagination or creativity.

3.) This not so Incredible Hulk

Some Halloween costume fails are so bad they’re good and this might be one of the best. The cardboard Captain Morgan Iron Man with his slightly confused face is worthy on it’s own but it’s the Incredible Hulk who really makes it.

Did anything go right here? From the poorly sketched abs to the bizarrely high eyebrows it’s a masterclass in how not to cosplay.  On the plus side the look of desperation in his googley eyes certain will give you nightmares.

1 point each for Hulk and Iron Man.

Oh goodness this is just… I don’t even know what to say about this. I cant decide whether the fact that it actually dispenses wine is sick or sickeningly genius. Either way this costume will definitely lead to you waking up to hundreds of embarrassing pictures and probably some awkward dinner conversation come Thanksgiving.

For at least making a costume.

You did it, you made it through the worst Halloween costume fails on the internet. Now that you know what to avoid, why not check out the Top 5 Scariest Costumes instead?