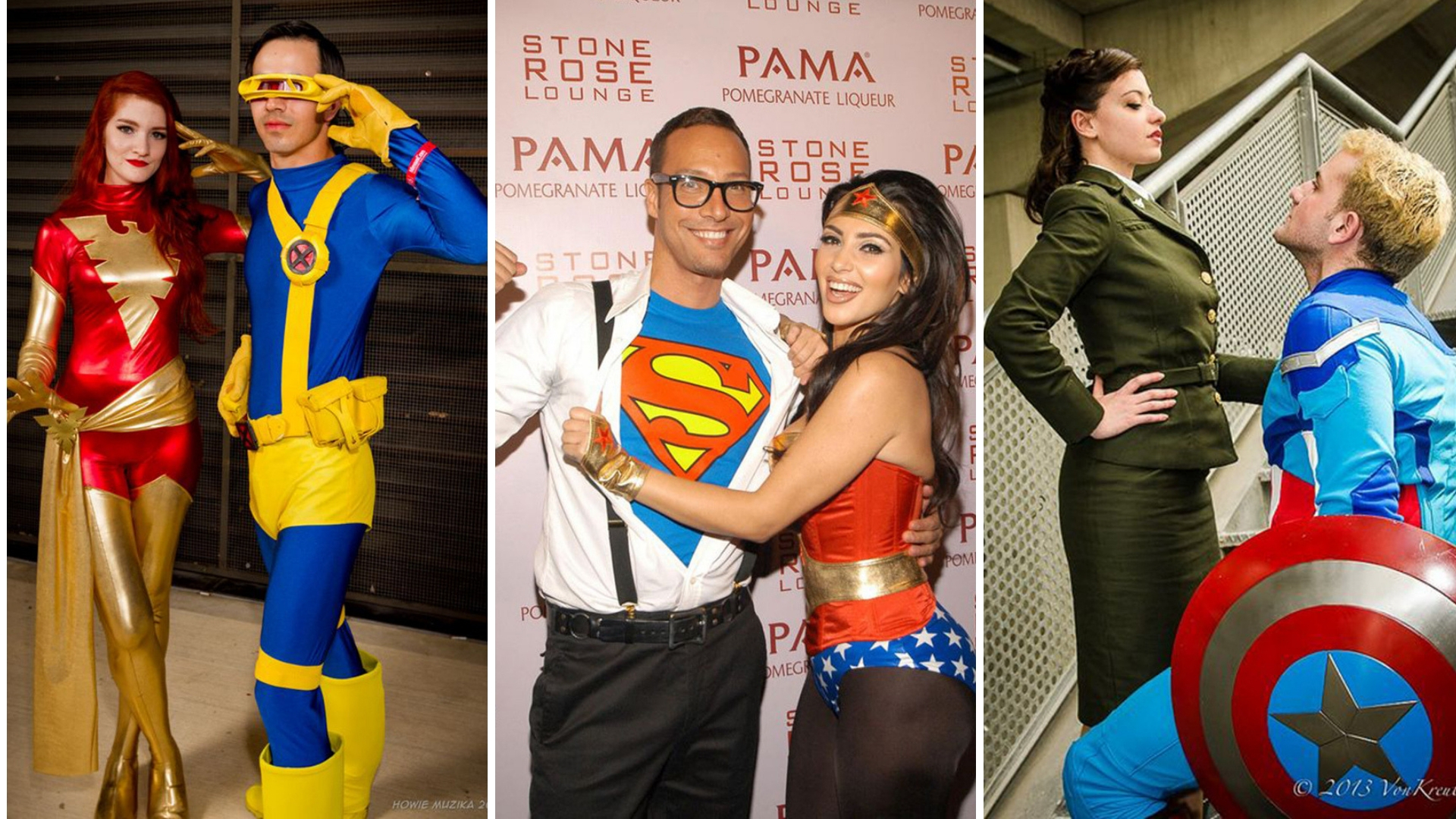 Halloween is a time to embrace your alter ego, dress up in masks and costumes and become a superhero, even if it is just for one night.  Check out these awesome couple Halloween costumes that you should be rocking this Halloween. Along with your costume, find out about each superhero’s abilities and strengths, from a flying Man of Steel to hooded vigilantes.

Everyone has thought about being a superhero: having superhuman abilities and being able to fly, kick ass and save the world from crazy power-hungry supervillains.  Undoubtedly, the thrill of the superhero lifestyle is a draw for many, not to mention the cool AF outfits!

Unless you are an actual superhero, when would you get the change to wear an outfit full of superhero flare and splendor? The answer to that question, my friends, is only on one very special day of the year: Halloween. Absolutely, Halloween is a time to embrace your alter ego, dress up in masks and costumes and become a superhero, even if it is just for one night.

Which of these couple Halloween costumes will you choose?

Superman, Man of Steel, is asuperhero sent in a spaceship to Earth from the planet Krypton. Superman’s human persona was Clark Kent, a clumsy but well-mannered man. Being disguised as Clark allowed Superman to mix with ordinary people without being detected.

Wonder Woman, or Diana Prince, is an Amazon sculpted from clay by her mother, Queen Hippolyta, and gifted with superhuman powers from the Greek gods.

Wonder Woman and Superman combined together make a superhuman power couple. They are the most powerful heroes in the DC Universe, making this a kick-ass choice for the best superhero couple Halloween costume.

Agent Peggy Carter is a secret agent in 1940s America and the significant other of superhuman Captain America. Captain America is the first of the Avengers, making his mark and saving the world since World War II.

Rock up to a Halloween party dressed as Cap and Peggy, and you will feel confident and ready to take on anything that your enemies throw your way.

By day he is millionaire playboy philanthropist Bruce Wayne, and by night he is Batman, the Caped Crusader and Dark Knight. Batman is said to be the world’s best detective, and after witnessing the death of his parents, he swore an oath of vengeance against criminals.

Selina Kyle, or Catwoman, is surely the queen of all crazy cat ladies. A cat-loving burglar that can kick butt: What’s not to love? Catwoman and Batman’s romance is complex, a love-hate relationship full of flirtation and at times fist fights (all in aid of saving Gotham City, of course).

Together Batman and Catwoman ooze sex appeal. If you’re after an outfit choice that will wow and sends hearts aflutter, then this is the attire for you.

He-Man is the alter-ego of Prince Adam. Alongside his twin sister, She-Ra, He-Man defends the great Eternia and Castle Grayskull from the evil forces of Skeletor.

”By the power of Grayskull… I have the POWER!”

Embrace the power of Grayskull and dress to impress with this most twintastic of all couple Halloween costumes.

Rocket is a cheeky talking raccoon and is one of the members of the superhero team Guardians of the Galaxy. Groot is a sentient, tree-like creature with a trademark saying: “I am Groot.” Although a tough, furry, pint-sized raccoon and an over-sized tree companion are a very strange pairing, Groot and Rocket care dearly for each other.

This quirky couple Halloween costume choice will be sure to stand out in the crowd and may even win you the best costume award on the night.

Hawkeye and Black Widow are a force to be reckoned with. No other couple will match your skill set and sheer awesomeness wearing these outfits.

Thor is one of the most famous of the Norse gods. The weather god of storm and thunder uses his superhuman abilities to protect his home, Asgard, and the human home of planet Earth.

Loki is Thor’s adopted brother and god of mischief, using his trickery to cause havoc across the lands.

Dress up as these two brothers and insert an air of mischief and thunder into any Halloween party.

Member of the infamous X-Men, Wolverine is a mutant with animal-like senses and amazing regenerative abilities. His retractable claws make him unbelievably badass and feared by many of his enemies.

Storm is a bonafide member of X-Men with an incredible ability to control the weather and atmosphere.

Together dressed as Storm and Wolverine, you can stop evil supervillains and protect the innocent. Or just look really cool on the dance floor busting some moves in these superfly outfits.

Jean Grey, a.k.a. the Phoenix, is a mutant born with superhuman abilities. Her telepathic and telekinetic powers make her one of the most powerful mutants around. Her other half and fellow-mutant, Cyclops, has the capability to emit powerful beams of energy from his eyes, hence the visor.

Become X-Men’s power couple while wearing these costumes, even if it is just for one night.

As Jules Is Going

The Incredibles are a family of superheroes. Mr. Incredible and Elastic Girl live the suburban lifestyle, well, that is until disaster strikes.

This is a fun and colorful Halloween look that will make people smile.

By day he is Oliver Queen, a playboy billionaire; by night he puts up his hood and becomes the Arrow, a vigilante-hero. His sidekick, the Black Canary, has world-class martial art skills combined with a supersonic, high-powered scream, the canary cry. Together they are an unstoppable superhero team taking on criminals and saving Star City.

Make a dramatic entrance into any Halloween party dressed as this dark, mysterious duo.

Peter Quill is the Star-Lord, an interplanetary policeman and member of Guardians of the Galaxy. Gamora is the last of her species and adopted daughter of Thanos, with superhuman strength, agility and healing.

This couple Halloween costume choice is a must if you’ve got a night of fighting intergalactic forces and saving the galaxy ahead of you.

Ant-Man is Scott Lang, a reformed thief and electronics expert who has the ability to shrink himself and other people and objects around him to to the size of an ant. The Wasp works alongside Ant-Man fighting evil and bringing criminals to justice. The Wasp’s superhuman power, like Ant-Man’s, is the ability to shrink to centimeters in height. She can also fly and produce energy blasts.

An insect couple that is cool under pressure: It’s a quirky costume option that will be remembered for years to come.

Barry Allen, a.k.a. The Flash, is a costumed crime-fighting superhero with the ability of super speed.

This makes a fantastic, colorful costume for both men and women. Delight, thrill and dazzle partygoers in these matching The Flash couple Halloween costumes.

King of Atlantis and founding member of the Justice League, Aquaman is a fish among men. Aquaman has superhuman strength, enhanced senses and almost impenetrable skin. The sea is Aquaman’s domain, with his ability to breath underwater, swim at super speed and communicate telepathically with sea life. Mera is the queen of the sea and leader of a small rebel army.

Make a splash at this year’s Halloween party and come dressed as Aquaman and Mera. Enter the room and make waves wearing this aqua-themed couple costume.

These costumes are an awesome start for any Deadpool costume.

Show everyone that you are a true Deadpool fan with this full bodysuit!

Become invincible this Halloween with this superb Hulk jumpsuit!

Designed to look like the Incredible Hulk from Marvel Universe you’ll be looking strong and tough and ready to take on any villain.

Fight off all villains this Halloween with these awesome Power Rangers costumes!

These one piece jumpsuit outfits are quick and easy and will instantly turn you into the red and blue Power Rangers that you grew up loving.

Take down Darth Vader and bring balance to the force with this incredible Han Solo and Princess Leia costume!

Armed with the force, you’ll be ready for whatever dark side enemies come your way in these costume!

Utilize all the powers of your magic ring this Halloween with these astounding Green Lantern costumes!

These jumpsuits and mask costumes will have him looking ripped and her looking sexy and will prepare you for anything this Halloween.