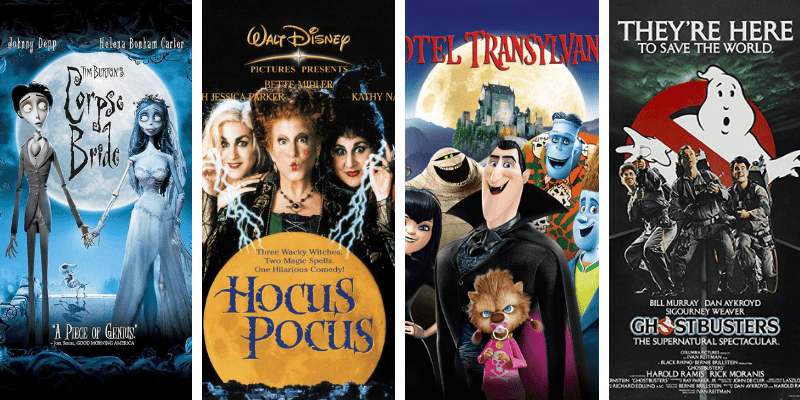 When you’re spending your Halloween with kids, the hair-raising horror movies you’ve been eyeing this season are now a complete no-go.

But hey, who said adults can’t tune in to kids Halloween movies? Chances are, you might even like them way more than the kids. After all, the animation industry understood a long time ago that adults should have their share of fun as well, and have been planting gems and jokes that go way over kids’ heads but that make us ROFL real hard.

It would be safe to say that even as an adult, Coraline still sends shivers down my spine.

When Coraline, a curious and intrepid girl, unlocks a door in her family’s home, she discovers an alternate universe that offers her a seemingly more enthralling life. This dream coming true will slowly turn into an inescapable nightmare.

ParaNorman has major Coraline vibes, and we dig it.

The movie features the story of a young boy named Norman who can see and communicate with ghosts. His life wasn’t all easy to begin with, but when he is asked to end a witch’s curse after tragic deaths occurred, his troubles got to a whole new level.

The maturity of the characters, the sensitivity of the conversations, and the intricate 3D animation make ParaNorman it a treat for all ages.

Nothing says Halloween movie like Hocus Pocus. Don’t be fooled, even if it’s a Disney movie, the trio of Salem witches knew how to keep it very grim.

While kids around you will still be terrified with the movie’s events, you, on the other hand, will be laughing your heart out at these kinds of jokes:

When I first heard that this movie was about Dracula owning and managing a lavish five-star hotel while caring for his sensitive daughter, Mavis, I was instantly sold.

While organizing the biggest party in the monster realm, they receive an unexpected visitor from the human world who will turn their life upside down.

Plus, if you really dig that movie, there 2 other sequels you *absolutely* need to check out.

Your kids need to know the answer to “Who you gonna call?!”, and this Halloween is the perfect occasion to teach them about Halloween classics.

Even if the movie is over 30 years old, kids will still enjoy the adventures of the academics-turned-parapsychologists. And maybe, next year they will be asked to dress as a Ghostbuster themselves!

Based on the hit TV show and comics, the movie follows the unhinged adventures of the Addams family, who are trying to undermine the secrets of Fester, their self-proclaimed uncle.

Monsters and ghouls? They got ’em. Spooky Halloween-ish vibes? Oozing. Even relationship goals? Morticia and Gomez Addams’ gothic true love is an inspiration to us all. Everybody watching will learn something!

Rent The Addams Family on Amazon

Looking for a movie that won’t fail to make the unanimity? The Harry Potter series is the way to go.

Even if it’s not, technically, a Halloween movie, we believe that Lord Voldemort’s reincarnation scene in Harry Potter and the Goblet of Fire is truly terrifying.

When the King of Halloween Town decides to celebrate Christmas, things get a bit confusing, to say the least.

As any Tim Burton movie, The Nightmare Before Christmas will make you feel all fuzzy inside while simultaneously spook you. That’s a hard combo to get.

Rent The Nightmare Before Christmas on Amazon

When the Baudelaires parents mysteriously passed away in a fire, their three prodigious kids are put into the custody of their downright evil uncle, Count Olaf, who’s after their fortune.

Remember how much we hated Umbridge in the Harry Potter series? Well, you might loathe Count Olaf more than her.

Rent A Series of Unfortunate Events on Amazon

The Wishbones are not what we can call a super happy family.

After a witch’s spell turns the Wishbones family members into a vampire, a mummy, a werewolf and Frankenstein’s monster, the only way for them to break the curse is to find their happiness as a family.

When a shy but smart groom practices his wedding vows, a deceased young woman overhears him and rises from the grave assuming he was marrying her.

Tim Burton strikes again, and he made our hearts all ache with this poetic story.

The beloved one-eyed green monster Mike Wazowski and his big blue partner Sullivan are the top employees of Monsters Inc., scaring children in order to power their city, Monstrapolis.

However, when a little girl finds her way to their world, they make a discovery that will change their whole world.

This teen detective accompanies her father to Los Angeles and finds out about an unsolvable mystery involving the death of a movie star. Staying true to herself, the resourceful heroine decides to resolve the case.

TBH, Nancy Drew kinda makes us want to switch our scary movie night with a Mean Girls/Clueless/Legally Blond marathon. We can still do that on Halloween, right?

Marnie, a teenage witch living with her family in the supernatural village of Halloweentown, prepares for a new school year in high school.

However, this time, she convinces the Halloweentown Council to let her attend a real-world high school in an effort to bring the two worlds together. However, things start to go a little bit south when Iron Dagger breaks loose.

Kids these days may not really know the animated dorky dog we grew up with, and this season is the perfect occasion for them to discover Daphne, Shaggy, Velma, and Fred—and for you to fall back into childhood!

In this movie, the long-time friction between the best friends behind Mystery, Inc. finally boils over and causes the group to break up, leaving Shaggy and Scooby-Doo alone. Two years later, an unexpected reunion happens.

What do you think of these kids Halloween movies? Have you watched any of them? Are there other Kids Halloween movies you think should be on the list? Let us know in the comments below! And if you’re rather a horror film kind of person, the movies in our next article will make you chill!