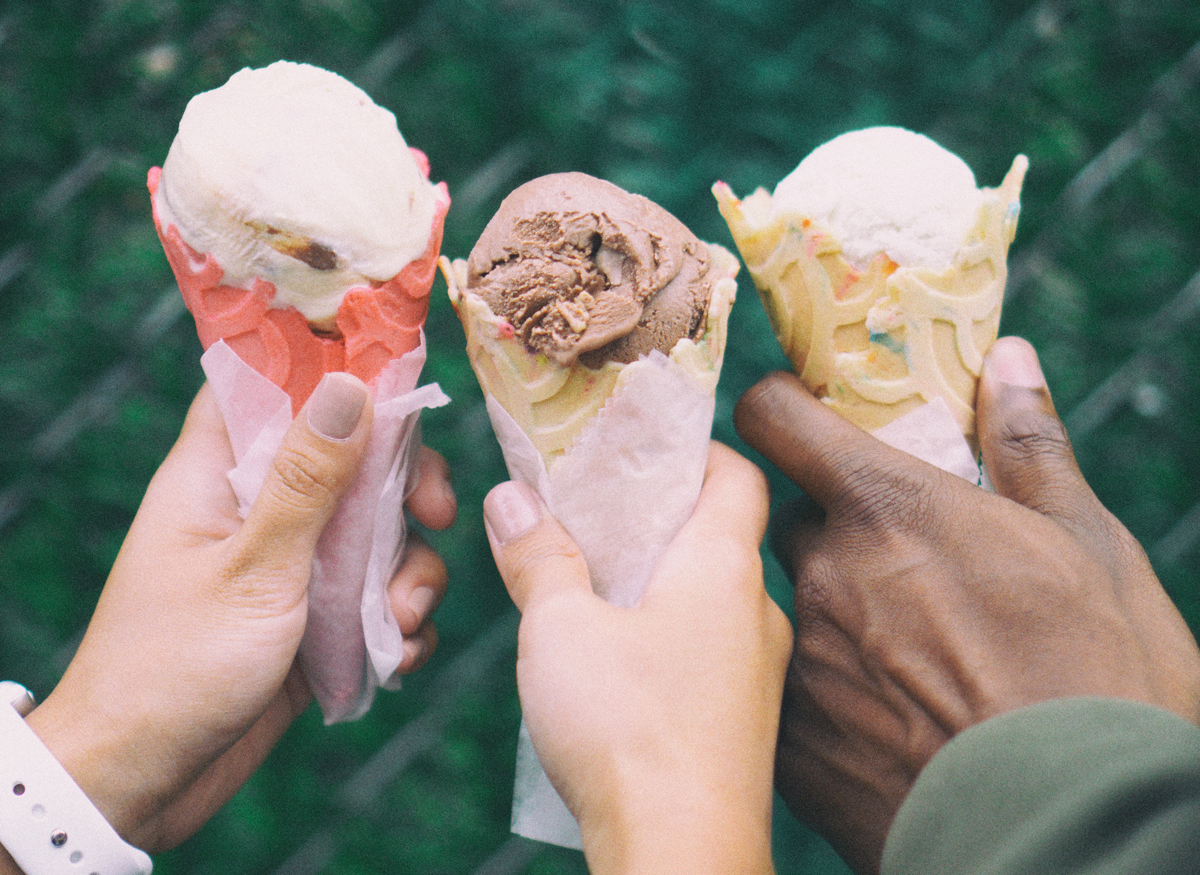 Many of us have heard the kids’ tune: “I scream. You scream. We all scream for ice cream.” And while that’s something you may have said as a kid, it’s safe to say that ice cream is just one of those foods that most people can’t get enough of. It’s a fact! According to the International Dairy Foods Association, 1.54 billion gallons of ice cream and other frozen desserts were produced in 2015. Also, the industry contributes more than $39 million to the national economy. Not only is that a lot of money, but it also proves that we can’t get enough of the frozen dessert served at our favorite ice cream places.

Despite its undeniable popularity, ice cream still had some room to grow and evolve. And the last few years have really changed how we look at the idea of ice cream. Whether it’s the types of flavors you can choose from or the many doughy vessels you can put a scoop into, there are a multitude of ways that ice cream has been tossed, turned and spun around. The best part is — we can’t get enough of it.

Find out how the creamy snacks are one of the world’s most beloved foods.

And, of course, we’ll spill which ice cream places you can find the best stuff at!

Back for a limited time in NYC: Vegan Peanut Butter Bon Bon & Cherry Preserve Swirl 🍒😍🍒 Pick up a pint while it lasts!

For many people, ice cream is one of their favorite desserts. However for those who are lactose-intolerant or just don’t consume dairy for a variety of reasons, they can’t necessarily enjoy it. However more and more ice cream places have been adjusting either their flavors or the entire menu to be dairy-free. From using nut milks to coconut milk, these ice cream shops have been changing up the way they actually make the dessert. And although some purists will be skeptical about how good vegan or dairy-free ice cream can be, a blind taste test would prove that many can’t even tell the difference.

Here are a few spots where you can savor some creamy ice cream and don’t need to worry about all the dairy.

Van Leeuwen Artisan Ice Cream started off roaming the streets of Brooklyn and Manhattan before setting up their storefronts. Now they have multiple locations throughout New York City and California. They have found a way to not only to offer up vegan options, but to make those flavors are just as rich and creamy as the ones with milk in them.

Since Paris has been known for indulgent varieties of food and drink, some would be surprised to find that there is a vegan ice cream shop in the city. Las Vegan is the city’s first dairy-free ice cream spot in the French city.

While they may be messy and make you feel extra full after scarfing it down, cones also add a little something extra to anyone’s ice cream-eating experience. But if you stop by your local spot, there are usually three cone options — wafer, sugar or waffle. And if you’re lucky, sometimes they’ll toss in a waffle bowl, too. But Konery has changed the cone game by providing you with the prettiest and tastiest cones out there. Based in Brooklyn, Konery offers a variety of flavors from red velvet and birthday cake to limited-edition ones like salted blue corn, pumpkin spice and matcha. Despite having some flavor to them, these cones will hardly ever overpower your ice cream selection. Instead, it will complement it.

3.) Going Beyond The Cup or Cone

Cones are great and all. But sometimes, you want something a little different. Luckily for everyone, many places have been doing away with the typical cone and replacing it with some interesting ingredients.

Taiyaki NYC has changed the idea of ice cream and fish from gross to adorably delicious. After choosing your favorite soft-serve flavor, the creamy treat is piped into a Japanese waffle that’s shaped into a fish. To add something a little extra, the shop also adds some other toppings to make it perfect for Instagram.

Meanwhile, Wowfulls rolls up old-school Hong Kong egg waffles into cone shapes and fills them with ice cream. Then there’s Mamasons, which is a Filipino ice cream shop in London that serves their flavors in milk buns. So next time you go to your local sweet spot, find out if there’s another way you can have your ice cream.

2.) Changing Up The Dessert Equation

We’ve talked about cones. Then there are the other dough substitutes that are like cones. Now, let’s get into the other ice cream dishes that are not only yummy but also look awesome on your Instagram feed.

Milk Sugar Love has a variety of interesting flavors to choose from. However the Jersey City, N.J., shop is getting lots of buzz for their ice cream sandwiches – namely the Fruity Pebble Mac Daddy. Sure, it might sound ridiculous, but it’ll make your taste buds and tummy happy. Whether you decide to get the handheld version or the full cake, the Fruity Pebbles ice cream between two French macaroons are the perfect answer to #cheatday!

Meanwhile over in New York City, there’s Bar Pa Tea. The bubble tea shop serves up a mean beverage but also covers the tea-flavored soft serve. And to keep with the bubble tea theme, you can get tapioca balls with it. Then there’s Black Tap Craft Burgers & Beer, which makes some intense version of our favorite ice cream spin-off: milkshakes. No, seriously: These are not for the tame at heart. Located in New York City and Las Vegas, the restaurant chain offers Crazy Shakes that are packed with so many ingredients that you won’t know where to actually start.

Finally, Satellite Room in Washington, D.C., has a lineup of naughty milkshakes that will leave you feelingtipsy. These boozy shakes are usually made with ice cream and either Bulleit Bourbon or Hennessy.

Pick a #MilkyBun: 🥣 for Milk & Cereal with Cap’n Crunch 🍓 for Strawberry Cookie Crunch with Fruity Pebbles 👾 for Jasmine Milk Tea with Sprinkles 🍪 for Cookie Monster with Cookie Crisp & Oreo #aftersicecream

Chocolate, vanilla and strawberry are the standard flavors that most people gravitate toward. However, as ice cream has grown in popularity and is also a very popular hashtag on social media, people are really experimenting with the types of flavors, from incorporating savory herbs like thyme and rosemary to adding activated charcoal.

Afters Ice Cream in Southern California has gained lots of praise over its rotating list of flavors. On the East Coast, Morgenstern’s has been offering traditional tastes and played with other interesting flavor profiles including some inspired by Kanye West.

Which dessert got you drooling and makes you want to run out and buy it ASAP? Tell us in the comments!