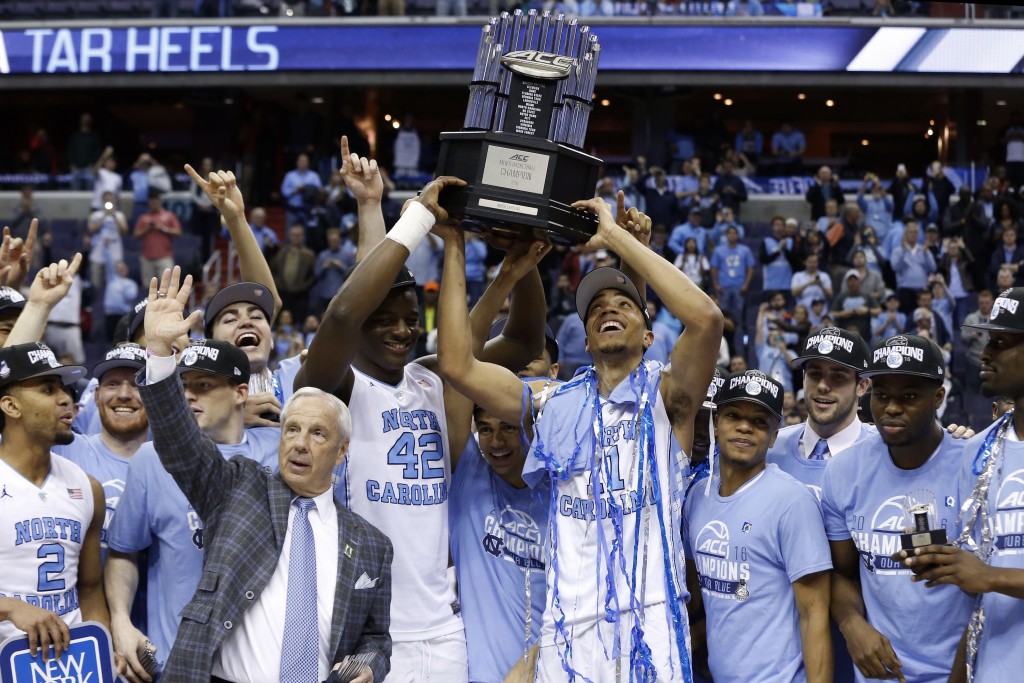 One of the best things about college basketball programs is that it actually has playoffs to determine a champion. No coaches poll, no computers, no group of bitter sportswriters with an agenda to choose a champion, and no bowl games.

You play in a bracket until the last team is standing, whether it’s from the big conference or a smaller one, which drives everyone crazy. When determining which teams are the Greatest Men’s College Basketball Programs of all-time, it’s easy because part of the criteria is on how many championships they have.

But championships aren’t all that make a program great. It’s a tradition of running a clean program, winning, great coaches, players, as well as class and the few players who actually go.

So here are the Top 5 Greatest Men’s College Basketball Programs of All Time:

The Jayhawks are second only to Kentucky in all-time wins, and have three national championships, six times a runner-up and 14 Final Four appearances. Kansas also has the most winning seasons in Division I history with 93. Rest assured, there will be a 94th, 95th, 96th, 97th and more winning seasons to come as the Jayhawks will keep on winning and producing some of the greatest players in the country for a long time to come. Kansas’ first coach was James Naismith who happened to invent the sport of basketball.

He is also, unfortunately, the only losing coach in the school’s history. Kansas is also the school responsible for producing one of the greatest players – Wilt Chamberlain.

There is no doubt that the school has one of the best college basketball programs in the United States of America because they are the all-time consecutive conferences titles record holder which is an active streak. Kansas ranks in second all-time in NCAA  Division I wins with 2,217 wins as against its 841 losses.  Kansas also boasts of its home arena called The Allen Fieldhouse which is notorious for its incredible noise levels.

Top 5 could get into a lot of trouble for ranking the Tar Heels so low. After all, they were voted as the number one most successful men’s college basketball programs in the last 50 years by ESPN. But someone has to be ranked fourth, right? And if it weren’t for those classy kids at Duke, the Tar Heels would be ranked higher. But you can’t overlook the five national championships, four runner-ups and 18 Final Four appearances.

The Wildcats play their games in the largest arena in the United States — the 23,500-seat Rupp Arena.

That’s huge for a state full of hillbillies and moonshiners, but most of them turn out in droves as the Wildcats regularly lead the nation in attendance.

Is that what makes them great?

Yeah. That and the eight national championships, three runner-ups, 15 Final Four appearances, 56 seasons of 20-plus wins, and 13 times winning 30 games or more.

The Kentucky Wildcats are regarded as the most successful college basketball programs in history in terms of both all-time wins (2,256) and an all-time winning percentage.

Winning less than 20 games a season at Kentucky is likely to get a coach fired.

Duke has been one of college basketball’s greatest programs over the past 30 years, and that’s saying a lot considering that they play in the traditionally competitive Atlantic Coast Conference. The Blue Devils are only second to UCLA in appearances as the number one team in the nation in weekly polls.

All they do is win, win, win (four championships in all with six runner-ups, and 15 Final Four appearances) send players to the NBA and make life miserable for their arch rivals down the tobacco road at the University of North Carolina. Rumor has it that players at Duke actually go to class and graduate, too.

Duke has won 5 NCAA championships and appeared in 11 championship game. They have the best win percentage in the NCAA 0.755.

Cameron Indoor Stadium, home of the Blue Devils was the largest gymnasium in the country south of the Palestra at the University of Pennsylvania as at the time of completion. Originally called Duke Indoor Stadium, it was renamed for Coach Cameron on January 22, 1972. This arena is regarded as one of the toughest arenas to play and win and in testament to that the Duke’s have not lost any non-conference game at home since the year 2000.

From 1949-75 the Bruins never had a bad season and exploded in the 1960 and early 1970s winning a record 10 national championships, including nine straight — a record that no one will likely ever break.

Year after year the Bruins turn out players who would go on to stardom in the NBA, winning more titles and eventually the Hall of Fame.

One of the products of the school who is currently one of the best players in the NBA is OKC’S Russell Westbrook. Also, the college basketball program of the UCLA produced other great players like Kareem Abdul-Jabbar and Bill Walton.

Although they’ve only won one title since the late legendary coach John Wooden retired, the Bruins are the gold standard in men’s college basketball. And let’s face it! Where would you rather play college basketball in Westwood, California near the beach and the entertainment capital of the world or in some frozen wasteland in the Midwest or Northeast?

Who is your favorite men’s college basketball program?