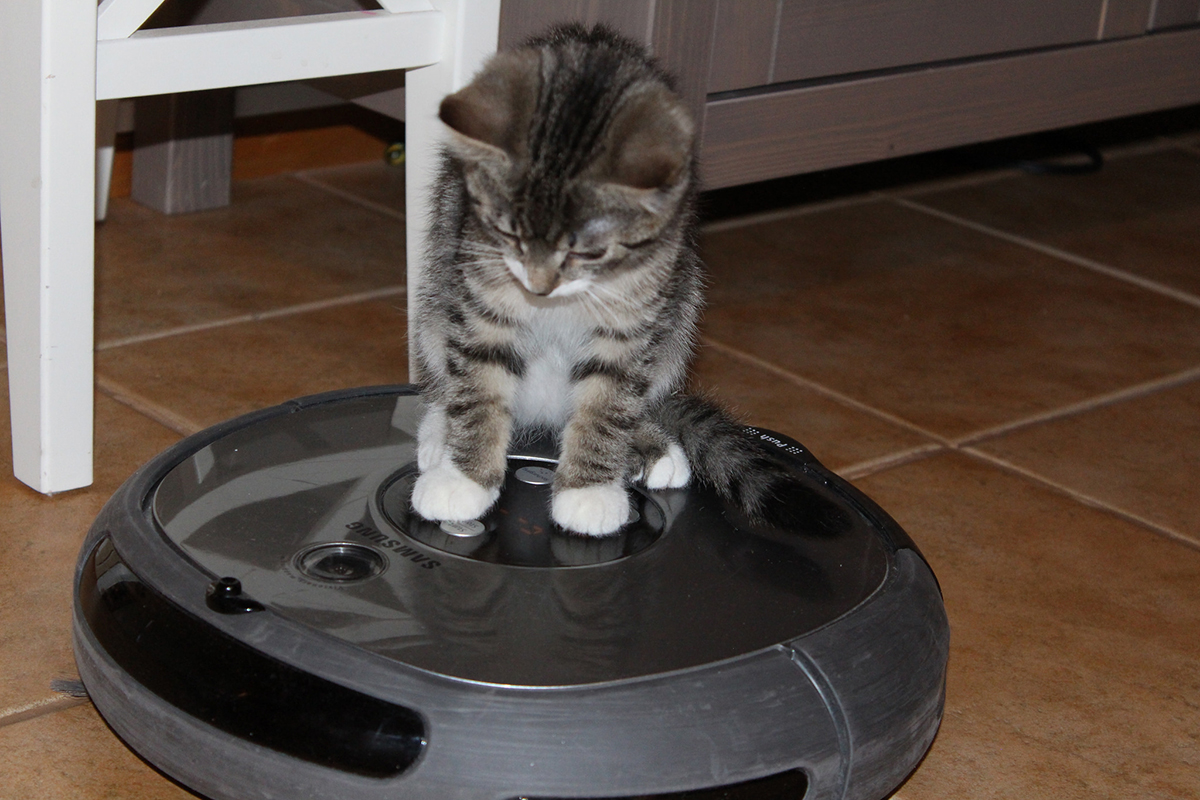 When people think of robot vacuums, they usually think of a pet riding on top of a circular device as it rolls around the living room. Although that can be very entertaining, it begs a deeper question: How do robot vacuums work? In this article, we’ll be looking at the mechanics of this household device. We’ll also look into how they fit into the future smart home world. And we’ll also find out what value brands like Dyson, iRobot and even Philips have been doing in robot vacuums.

The Rise of the Smart Home

With our lives becoming busier, new technologies are helping us get through life’s most menial tasks. Mobile phones can keep track of our schedules and take great photos. Washing machines can handle heaps of clothing or just that shirt that you accidentally spilled coffee on this morning. You can now control each of your house lights by tapping on an app. And you can find out what your pets are doing in your bedroom by look at your smartphone.

And with all these products coming into vogue, smart homes are also becoming popular. But what is a smart home? By definition, it “is one that provides its home owners comfort, security, energy efficiency (low operating costs) and convenience at all times, regardless of whether anyone is home.” Smart homes have appliances and electronics that are linked to communicate with each other. They can function on a schedule, or you can control them remotely with your mobile phone.

Berg Insight reported that there are more than 30 million smart homes in North America and Europe, and researchers predict that by 2021, 70 percent of American and Canadian homes will have smart technology.

Because of smart home and smart technology’s popularity, we’re able know what’s going on in our homes without having to actually be inside them. And aside from the self-timed coffeemaker or Nest thermostat, the robot vacuum is also becoming an increasingly popular product in many households.

What Are Robot Vacuums?

Also known as “robovacs,” robot vacuums are devices that can clean floors or carpets without anyone physically moving it around. Some robot vacuums have cameras and sensors that can see which areas to actually pick up dirt and debris in. And there are others that users can maneuver with remotes or a mobile phone. The first robot vacuum came out in 1996. It was known as the Trilobyte and was made by Electrolux, a Swedish home appliance company.

Dyson followed suit with its own model, the DC06, in 2001. Unfortunately, it was too expensive to produce, so it never hit the mass market. This changed in the coming years, however. While Dyson was figuring out how to make a more affordable model, iRobot debuted their now-signature product, the Roomba, in 2012. Since then, the iRobot has produced 40 (and counting) types of Roomba models that vary in price range. Other brands, including those that madethe upright vacuum popular, have jumped into the robotic game and are coming up with their robot vacuums.

In the next section, we will look at actual parts that make up the home cleaning device. After looking at the nuts and bolts of the robot, this will hopefully eventually lead us to find out, “How do robot vacuums work?”

The Size of a Robot Vacuum

Although they come in various sizes, robot vacuums are generally fairly small, especially in comparison to their older upright counterparts. With the help of How Stuff Works, we’ll use the Roomba as a model to see what’s inside this circular contraption.

And robot vacuums are usually between three to four inches in height. This means these vacuums can easily move under couches and coffee tables without getting stuck.

How Do Robot Vacuums Work without a Power Cord?

Robot vacuums, like the iRobot Roomba models, are powered by NiMH batteries. In layman’s terms, you’ll no longer need to worry about finicky cords because these have rechargeable batteries. Older models of the Roomba would take up to seven hours to fully charge the battery. However, over the years, newer versions have cut the time in half, and some take as little as three hours to charge. Since they run on battery power, a full charge will get you 75 minutes to two hours of continuous cleaning time. The heavy-duty Makita DRC200Z industrial robotic vacuum will run for 300 minutes before needing a charge.

According to How Stuff Works, this type of robot vacuum “in the Roomba world means vacuuming three medium-size rooms before it needs to rejuice.” The Roomba also has five motors to help it move around a room—one driving each of the two wheels, one for the actual vacuum, one for the side spinning brush and the last one for the agitator assembly, which helps in getting rid of the dust the vacuum picks up.

And when the circular vacuum starts to lose energy, it won’t be a problem. Many models will just make their way back to the charging docks to power up before going back to clean again.

What Makes a Robot Vacuum Robotic?

Now that we covered some of the main mechanics, let’s move onto the things that make a robot vacuum robotic. In the beginning, robot vacuums would clean areas without any set path or direction. This made for longer cleaning time but hilarious Roomba cat videos. Over time, brands like Hoover, iRobot and Dyson have put in different sensors in order to stop the vacuums from bumping into walls and furniture.

For instance, iRobot came up with an updated microprocessor and iAdapt 2.0 sensors. They also have vision-based simultaneous localization and mapping (VSLAM). This technology uses a camera on the Roombas that records the layout of the rooms you intend to clean. It then remembers them for future use. As IEEE Spectrum explains, “To create a map [with the VSLAM], the camera takes a picture, and then some fancy software looks for distinctive patterns of pixels in that picture.”

Do Robot Vacuums Work with Wi-Fi?

Current robot vacuum models now have Wi-Fi capabilities that for many can be switched on or navigated by the iRobot HOME app on your smartphone. You can also schedule cleaning times on the HOME app, which will let the Roomba, especially the 980, do its thing while you’re at work. And for those of you who are worried about Roomba’s security, iRobot has been workinghard to keep it secure with the use of its HOME app.

Aside from the app, you can also link the new Roomba models to your Alexa or Google Assistant to stop, start or lead your device to the charging station. The features not only make robot vacuums keep up with the times, but they also give you more time to do other things than push around an upright appliance.

Let’s face it. A robot vacuum is a circular home appliance on wheels that goes back and forth. So it will likely not be able to climb stairs or change heights that quickly without some help. However, despite this handicap, robot vacuums have the ability to switch from one surface to another pretty well. And of course, the higher the price, the more likely you’ll get a more advanced robot. For instance, any of Neato’s Botvac Connected models can switch from carpet to hardwood floor back to carpet pretty seamlessly. When its technology detects carpet, the robot vacuum starts to speed up. Then when it senses hardwood floors, it slows back down.

Finally, Do Robot Vacuums Work for You?

Robot vacuums have been around for more than 22 years, and as time passes and technology continues to progress, these home appliances will also continue to change. While many say that robot vacuums will not be able to replace the standard upright device, robot vacuums are still a great tool to have in the home. For those who are sticklers about cleaning or have a huge house to clean, this is a great supplement to help with daily upkeep. And if you’re not a big fan of pushing around a vacuum, then this is a great way to get the job done without having to actually lift a finger.

From the ever-popular Roomba to the high-end Dyson, there are a variety of robot vacuums out there. You just need to do a few things before opting to buy one. Do some research on the different brands and models out there. Find out what kind of cleaning will fit your life. And think about how much much you’re willing to spend. After doing all of that, you will then be able to find the right robot vacuum for you.