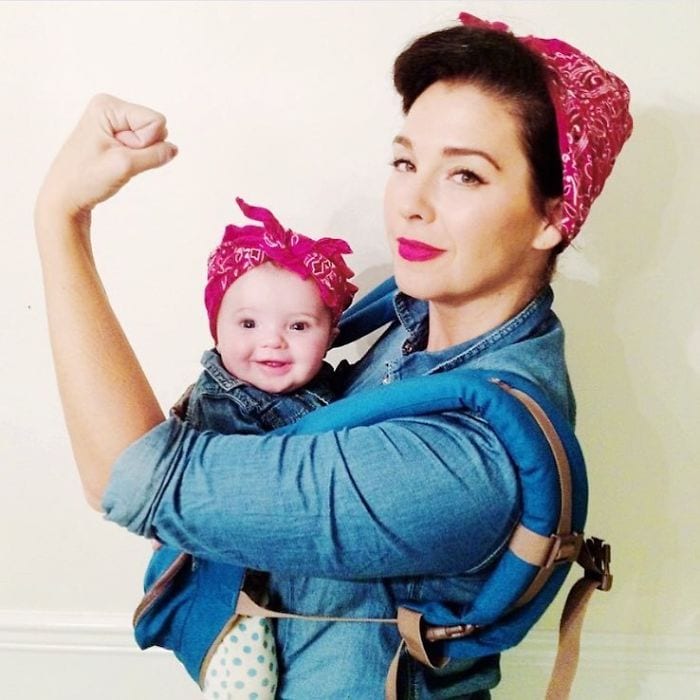 The countdown is on and Halloween is almost upon us. If you have a baby, you’re likely wondering whether or not you should dress the baby up and how you should transport them. Wagon? Stroller? Baby carrier?  If you prefer the latter but are worried toting around a little one might not jive with your costume, we’re here to solve your problem in the most ingenious way!

Here are 25 fabulous costumes ideas for moms (and dads) that actually work the baby carrier into the costume:

No matter your political affiliation, this could be a fun one.

Maybe we’re just a bit bias because we love anything zombie themed, but we are loving all of the zombie costumes out there!

Mama and baby zombie aren’t cute, they’re scary – which is what Halloween is all about!

Safari mama and baby is one of our favorite costumes because it’s so versatile and both costumes can stand on their own.

If your child has a kids Halloween party and is able to crawl around on his own, he can go as a little lion cub. At the same time, you can go to an adult’s only party as a Safari girl. And then when you want to combine, they still work.

How precious is this little bundle of popcorn?

While this costume is a bit more involved than Mario, it’s still simple to make and oh-so-adorable. Bonus points if you bring little baggies or real popcorn to hand out as well.

We love this little Rosie the Riveter. Rosie became an icon for women everywhere during WWII, representing the women who worked in factories and shipyards to replace the men while they were away at war.

6.) Rapunzel and Her Tower

Rapunzel originated as a German fairytale and tells the tale of a beautiful girl known for her long, golden mane who was stolen from her parents as a baby and banished to a tower. In recent years it has been retold in Disney’s Tangled and Tangled After After.

Yes, a bit grim, as all fairytales are, but still makes for a great Halloween costume!

Check out this dad who dressed himself and his baby up as a workloader from Aliens!

If you need an easy, last-minute costume for you and your baby, this isn’t it… However, if you are a big fan of Aliens and don’t mind a bit of creative work, this costume might just win you the costume contest.

This is one little spider we wouldn’t be afraid of!

While this costume isn’t as DIY as some of the others, it’s adorable and not overly complicated.

This is one costume guaranteed to turn heads. If you want something a bit more goth and scary, consider dressing up as a zombie and having your baby burst through your belly.

We like this costume because it’s incredibly easy to DIY, and also stands apart. Most moms and dads dress their babies up in cutesy costumes; this one is anything but!

This is another costume we love for its ease. And who doesn’t love Mario? Plus, if you have twins, you have Mario and Luigi.

In order to achieve this look, you’ll just need a bit of green fabric, some eyeliner for a mustache, and a red hat that you can then apply a homemade M sticker to. What could be easier?

Halloween is certainly a fun time, but as a  parent, we know it can be stressful trying to manage real life while trying to find the perfect costumes for your kids. That’s why we love these simple yet adorable costumes.

To achieve this look, all you need is a big cheese head and some mouse ears. If you live in the “cheese-head” state of Wisconsin, this shouldn’t be too hard to achieve!

This is one cute kid who’s allowed to be a little grouchy on Halloween!

Sesame Street Halloween costumes are always a good idea and never go out of style. If you live up north and it’s likely to be cold on Halloween, this costume is a great way to keep your little one warm, too.

We were a little miffed when we heard about the professor who covered himself in bees for a class, but we love this beekeeper Halloween costume.

It looks like a good mix of DIY and store-bought and unique enough to help win first place in any costume contest.

How cute is this dad with his ET baby?

Bonus points for this one, as the costume is super easy to make and a great budget-friendly costume. Just get a red hoodie, a white plastic bin, an ET costume for the baby, and you’re set! We also like that this doesn’t involve a lot of face paint so will be easy to clean before bed.

Work in the aviation industry? This is one of our favorite costume ideas for moms and dads that fly. Yes, it’s a bit involved and takes a bit of creativity, but as you can see, it’s worth it.

Hoping to pass along your love of flying to your little one? Start ’em young!

How gr-r-r-reat is this costume?!

It might be a bit awkward for the mom and dad to walk around in, but it’s cute, so it’s worth it. You are guaranteed to bring home lots of candy with this winner.

Everyone loves unicorns, right? Then what’s better than an adorable baby unicorn floating on a cloud!

This is another example of a quasi-DIY costume and one that can either stand on its own (for the baby, at least) or work together.

We like parents with a sense of humor… Not everyone wants to dress their baby up as a boiled lobster just out of the pot, but we applaud those that do!

Or maybe it’s just because we love lobster. Whatever the case, this little lobster and chef costume is a win.

How fun is this costume? While we doubt that mama SCUBA diver got very far in her flippers, it was perfect for at least one photo opp.

If you are a SCUBA lover, this costume idea for moms and dads is for you.

While most of the costumes on our list focus on front carriers, this is a great example of a back carrier costume.

This costume is all about the back: the feathers and the hood make the costume. If you don’t want to front-carry your baby this Halloween, make sure you find a costume like this that accentuates the back.

One of the best things about having a child is sharing your hobbies with them.

We assume this dad is a fan of hang-gliding and, while we definitely wouldn’t support him taking his son hang-gliding at this age, we love that he’s at least introducing him to the concept!

22.) A Leprechaun and His Pot of Gold

If Saint Patrick’s Day is your favorite holiday, why not incorporate a bit of the Irish into Halloween?

This dad and his pot of gold baby are the perfect example of mixing holidays. Props to anyone who dresses up as Santa and his elves or reindeer too!

23.) What A Cute Little Cupcake

Need costume ideas for moms and dads who bake? This tops our list.

It’s not one of the simplest DIY Halloween costumes out there, but it’s definitely one of the cutest. We recommend following this mama’s lead and starting with a pic in front of your mixing bowl.

Just when you thought the boiled lobster and chef was cute, we bring you the Italian chef with his spaghetti and meatballs!

Did you notice how even the candy holder (aka the colander) is part of the costume? This get an A+ in our book and another example of great costume ideas for moms and dads.

Devils and angels have been a popular costume for years, so why not keep the trend alive with your baby this Halloween?

If you have a well-behaved baby, let her go as the angel. If not? Put some red horns on her and she can be the devil.

If you’re a fangirl mama, here are a few costume ideas for you. If you have children, they’ve likely already chosen their costume and are counting down the days until they can dress up and collect candy. If not? Here are a few boo-tiful costumes for older kids.

Do you have any great costume ideas for moms and dads that incorporate a baby carrier? Tell us in the comments.