These Are the Top 5 Longest Roads on Earth 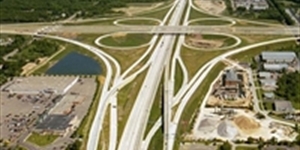 We humans like to move from place to place a fair amount, and barring that, we like it when the things we want are brought to where we are. Thus, our planet is largely crisscrossed with roads. But today we’re not talking about any mere city streets or suburban lanes, or even the highways that connect our metropolises.

Today we are going to take a look at roads so long that they span multiple time zones (not to mention dozens of tanks of gas). If you thought Jack Kerouac spent a long time On the Road, you can bet he didn’t see anything half as epic as one of these here babies. That’s because these are the five longest roads on the whole planet. 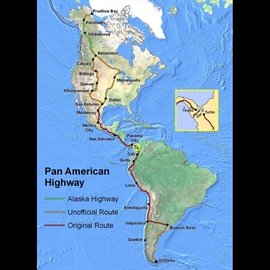 We end with what many people actually think of as the world’s longest road. Were it not for too many stipulations for us to allow without comment, it would indeed hold that title. But the fact is that the so-called Pan American Highway is actually many different roads in many different countries, and some stretches of it are anything but highway (more like pathways). But indeed this series of roads does add up to over 29,000 miles in length, and spans from Argentina to Alaska. If you have a lot of free time and plenty of money for gas, spare tires, and motel rooms, then we recommend a trip down this most epic (series) of roads.

4 Finally, an American Road for Ya! 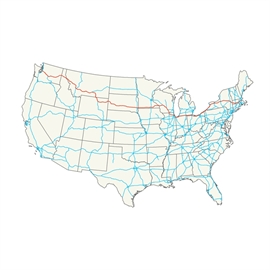 Interstate 90 will keep your car in motion from ocean to ocean! (I just made that up — thoughts?) Built in one year, 1957, under the Eisenhower Administration, I-90 crosses 12 states, and stretches out to a little over 3,100 miles. It connects the northwest with the northeast, and, if you have done much driving around our fair country, there is a good chance you yourself have been on it. Been to Seattle or Chicago? Seen Mt. Rushmore? Yeah, well so has Interstate 90.

3 The Trans-Canada Highway Connects All Ten Provinces with a Length of Just Under 5,000 Miles 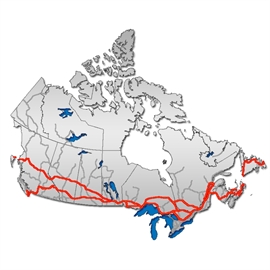 Our next road is another “trans” highway, this time crossing Canada. The Trans-Canadian Highway spans the entire breadth of Canada, reaching a length of just under 5,000 miles. Though across much of the country there are two separate highways running parallel to each other and separated by a few hundred miles that are both designated as “The Trans-Canadian Highway” so one could almost argue that this roadway is the world’s longest! But one could also drop the subject and move on to number four, because number four is…

2 Trans-Siberian Highway Reaches a Length of About 6,800 Miles 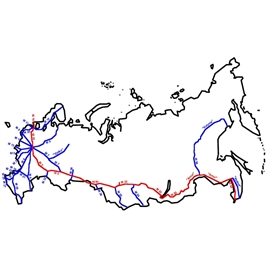 Our runner-up for most protracted motorway, if you will, comes to us straight out of Soviet Russia! (Road drive you?) Construction of the Trans-Siberian Highway began in the late 40s, thanks to the labor of thousands of prisoners sent to the gulag because Stalin was a giant prick who hated it when people had opinions that didn’t coincide with his. Yes, that is simplifying things, but not all that much, really. The highway, which, to be fair, is more a series of connected roadways, was expanded in the late 90s, and today reaches a length of about 6,800 miles. And that’s the Pravda!

1 You Can Find the Longest Highway in Northern Australia 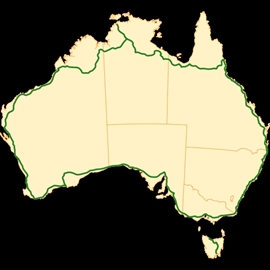 Highway 1 in northern Australia takes the prize for being the longest road in the world. How long is it, you obviously ask? Oh, just about 9,000 miles long, that’s all. Highway 1 is longer than a third of the entire earth’s circumference! It achieves its great length by circumnavigating almost the whole of Australia, usually staying right near the coast. Our advice? Make yourself a really good mix tape before you head out. That is assuming you still use cassette tapes, for some very odd reason…

Want to hit the road in an RV? We’ve put together A Practical Guide to Planning an RV Road Trip!

Guide To The Best Road Trips In The USA 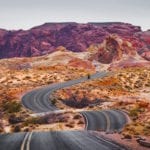