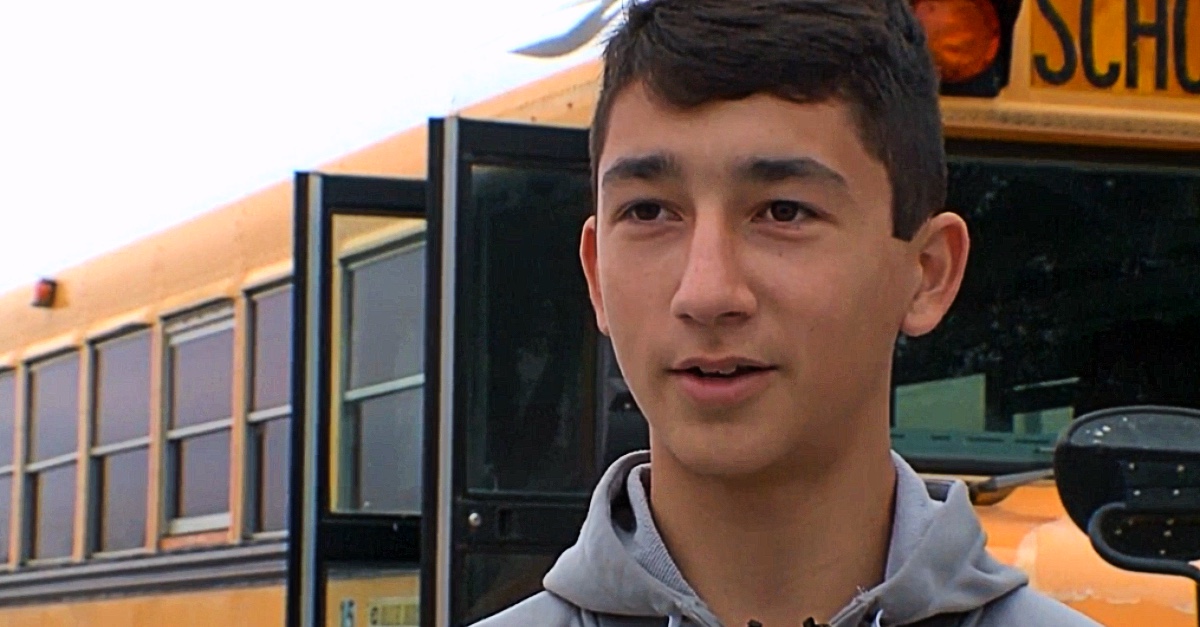 “I have two young children! You should have offered that seat to me the moment you saw me step on this bus, young man!”, she shrieked. If anyone wasn’t paying attention, they were now.

He stood up defiantly and lifted his jeans. There was an audible gasp as he revealed something the entitled mom never saw coming.

Thomas Scott worked as a Walgreens employee in Fort Worth, Texas. He had just finished another 10-hour shift and tiredly made his way to the bus station.

His body was moving in autopilot mode. He had taken this commute so many times, he could walk it in his sleep. The bus arrived just on time. Thomas greeted the bus driver and hopped in.

The bus was busier than usual. Only a few seats remained. Thomas made his way to the free seat near the back of the bus.

As he sat down, he sighed in relief. It was the first time he sat down in 11 hours. His body melted into the seat as the bus took off. Then Thomas noticed an unfamiliar face.

There was a young boy sitting at the top of the bus. Not many people took the bus but those that do, generally use the same route time and time again. Faces got familiar quickly, but he had never seen this boy before.

With a side glance, he noticed he was sitting on the seat reversed for vulnerable people like the disabled, pregnant women, or women with kids. And he wasn’t the only one.

The bus had just pulled into the next bus stop and with it, a bunch of passengers stepped on board. One of those passengers was a mom with two young kids in tow.

Immediately, Thomas noticed her eyeing the reserved seat up. Her face looked visibly disgusted once she saw the teenage boy sitting in it. He looked like a perfectly healthy 18-year-old boy. She began to stare at him.

Thomas watched as the visibly annoyed mom began to stare at the teen. The boy remained nonchalant and ignored her obvious stares. Instead, he looked down at his phone and out the window.

Thomas followed his gaze towards passing trees, wooden houses and wide open plains. When he looked back at the woman, he was alarmed.

His ignorant behavior made her even more annoyed. Thomas could see she was beginning to lose her patience. Thomas knew she was trying to intimidate the boy into offering her his seat through an intense stare but it wasn’t working.

Thomas braced himself for what she would do next.

When the woman realized her stares weren’t inspiring the reaction she wanted, she gave up being passive-aggressive and chose a more direct approach.

She made a beeline for the boy. Now, it wasn’t just Thomas who could feel the rising tension radiating from the woman.

She stopped just a step away from the boy. She bent down and spoke in a firm and strong tone. And she spoke loud enough for the entire bus to hear.

Suddenly, all eyes were on the scene. The boy looked at her unimpressed. Thomas knew that with an attitude like that, things were about to go down.

“Do you realize you’re sitting in a reserved seat for vulnerable people? If you had any manners you’d offer that seat to someone more deserving!”, she spat.

She paused, waiting for the boy to react. She was probably expecting him to immediately apologize and beg for her mercy but this boy was much much more than he seemed.

The teen said nothing so the woman continued, wanting to teach him a lesson. Unaware that her plan would epically backfire.

“I have two young children! You should have offered that seat to me the moment you saw me step on this bus, young man!”. If anyone wasn’t paying attention, they were now. Silence engulfed the bus.

Thomas noticed the driver keeping watch on the situation from his front mirror. The teen boy raised his head and looked at everyone who was staring at him. Some were shaking their head in disapproval, others, like Thomas, were completely fixated on what his reaction would be.

Thomas could have never suspected what happened next.

Thomas wondered if it would break into a brawl. This kid really didn’t look like he cared about anything. He grabbed his phone, ready to call for help if needed.

Without a word, the boy stood up. The woman began to smirk, thinking she had won this battle but she was very very wrong.

The boy reached for the handlebars on the bus and steadied himself. “You think you deserve this seat just because you’re a mom?”, he jolted.

The boy was wearing denim jeans, a dark hoodie and chunky sneakers. Thomas could tell he was a cool kid. He still had one ear plug in his ear.

Thomas was on the edge of his seat. This kid had guts, standing up to the bull-headed woman like that with everyone watching him. He had to be careful or he’d have a bus-full of people against him.

The woman’s smirk was quickly replaced by anger. “Yes, I certainly deserve it more than you!”, she remarked. The boy laughed ironically before bending down and grabbing his jeans.

The boy looked at everyone’s eyes watching him as he struggled to get something from his jeans. He fiddled around and yanked at the ends of his bootleg denim jeans until the fabric came loose.

Everyone watched anxiously, wondering what on earth he was about to pull out of his garment. Safe to say, no one saw it coming – especially the entitled woman.

Thomas was on hyper-alert. He knew the dangers of the gun laws in Texas. Immediately, he feared the worst case scenario.

His heart pounded as his eyes were fixated on the teen boy’s hands. Just then, he saw a bulge from underneath his jeans. A chill went down his spine.

The boy pulled up his jeans and kicked his prosthetic leg out. There was an audible gasp on the bus. Suddenly, everyone was horrified that this young boy was forced to prove himself to this woman.

Thomas watched as the mom’s face went red with embarrassment and shame. Suddenly, she was speechless.

And with everyone’s attention on her, words failed to leave her mouth. Instead, she retreated back to her standing space without a word.

The boy looked around at everyone before sitting back down and fixing up his jeans. Thomas couldn’t believe what just happened. Suddenly, an intense feeling came over him.

He felt awful for the boy. He almost felt sick to his stomach. Suddenly, he saw his brother who was also an amputee and had lost a limb in war.

Imagining his brother going through what the young man just went through made his heart pang with shame. He hoped he wasn’t embarrassed so an idea came to his mind.

Thomas yelled, “Man, that leg is so cool! Shame on you, lady!”. His single words of encouragement inspired other passengers to do the same.

Suddenly, an outburst of support and encouragement poured into the atmosphere for the young boy. And his reaction?

It wasn’t long before the young man was smiling again. He visibly looked much more confident about his disposition.

People clapped him on the back and apologized for seeing him experience that. But one lesson above all else, stuck with Thomas that day.

It’s never okay to judge people by their looks. Especially when it comes to someone’s conditions or ‘disabilities’. Many people who suffer from conditions present as perfectly healthy-looking people.

This is why it’s always important to approach everyone with kindness, compassion, and understanding. Which is exactly what Thomas decided to do next.

Once everyone was finished speaking up for the young boy, Thomas approached him and sat beside him.

He began to tell him that he had a brother who had the exact same condition. He explained to him how his brother lost his leg and told him of how well he’s doing now – even winning medals in competitive sports. The boy smiled.

Thomas offered the boy his number and asked him to contact him if he’d ever like to meet someone like him. Perhaps they could relate in ways others couldn’t understand.

The teen boy’s face lit up. His eyes sparkled. He told Thomas that he’s never met anyone like him and would love to talk to him. The pair ended up meeting and hit it off. Now, the boy has someone who understands what he’s going through!