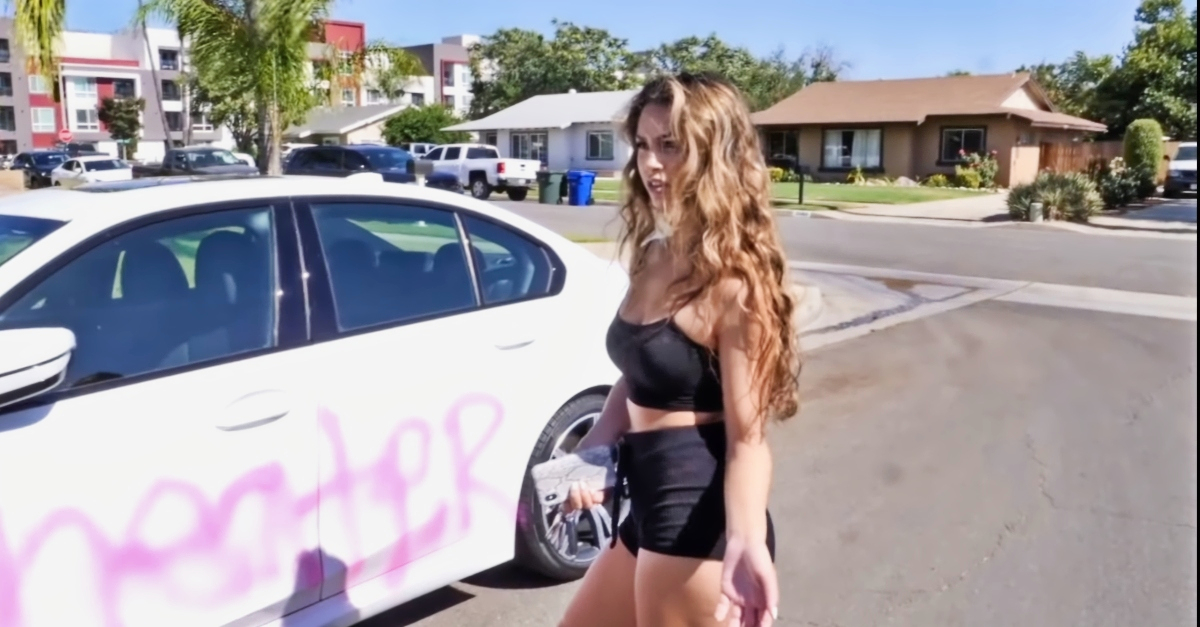 Grace dismissed the babysitter’s flirtation with her husband at first. Her heart sank when she overheard them whispering. Something was going on that she didn’t know about, and she was about to discover what it was.

She watched the video and immediately regretted it.

Grace was becoming all too aware as time wore on that their relationship had changed. They had been together for a while. Grace began to wonder whether her husband thought it was time for a change. After all, she had given birth to a child, and she didn’t have the energy or the physique that she once had.

Usually, she would just brush these suspicions off. But now, she had a good reason for suspicion.

It was Anna. She dropped by unannounced to collect her payment for the month. She said that John was expecting her. Grace forced a smile. Just then, her husband appeared.

“Anna!”, he said. Grace was about to get up and reach for her wallet when John said, “Oh I got this Grace. Don’t worry about it”. He insisted on walking Anna out to her car and paying her himself. Little did he know, Grace was watching.

More often than not, being a mom isn’t the sexiest of jobs. You are tired, full of mess and constantly available for your kids. However, Grace’s husband was a desirable man. She had often noticed the looks he got from other women. She tried not to let it bother her, but it lingered in the back of her mind.

Grace could see that Anna was behaving more oddly than usual around her husband tonight, and she was wearing a slinky little black number that left little to the imagination.

Maybe she was going out partying afterwards? Grace tried to give her the benefit of the doubt. But when she saw her put her hand on John’s arm, she knew she was definitely up to something.

Grace watched Anna and her husband walk to the hallway, then they stopped. She wished she could hear what Anna was saying. Then, her heart dropped.

The audacious babysitter took a few steps back and gestured at her little black dress suggestively. It didn’t take much for Grace to imagine what she was saying. She couldn’t see her husband’s reaction, though. He had his back to the camera. Then, they stepped outside.

“This is it,” she thought. The moment her marriage came crumbling apart. She watched them converse. But something was wrong. It looked like an argument. Anna started to cry and John stormed back inside. What happened?

Grace raced out to her husband. “What happened?” she asked. “I fired her,” John said. “Why?” Grace questioned. John told her to take a seat. Grace braced herself for what was to come. It was happening. She couldn’t believe it.

“I didn’t like the way she looked or talked to me. She flirted with me all the time and I felt like she was completely disrespecting you. She made me feel uncomfortable. I told her to stop many times. She didn’t listen. I was left with no choice. It was way too inappropriate.”

Grace began to cry. She told John how she felt like everyone she knew had been able to pull themselves together after giving birth, but she was struggling with her insecurities and her post-partum depression.

She hadn’t managed to lose the baby weight and she felt like he didn’t find her attractive anymore, which only made things worse.

She started treatment with anti-depressant medication and began seeing a psychotherapist. John was supportive and completely on her side. She no longer felt so alone.

Around four weeks later, the terrible looming paranoia and insecurity began to lift – Grace felt like she was able to breathe.

The feelings of inadequacy, depression and anxiety melted away and she started to become her old self again. They hired a new babysitter to help her with her baby a few days after John fired Anna, and she was nothing like her.

After a year of treatment, Grace was ready to come off the medication. Her one regret is not getting the help she needed earlier.

There was joy in her life again, and with John’s support, she grew to accept her post-baby body – after all, John didn’t care one bit that she wasn’t as slim as she used to be, and she finally accepted that too.

Although some people may trivialize postpartum depression, it is very real and requires medical care. It is not something a new mother can overcome by herself simply by “snapping out of it” or by trying to be more positive.

This extreme form of depression can make women feel like they have lost control, that they are helpless, and that they are inadequate. So, what should you do if you know someone you think is experiencing it?

According to the Post Natal Depression Support Association, the most effective way to tackle postpartum depression – in conjunction with medication –  is to seek professional care from a psychologist to identify the triggers and help the new mom work through them.

There are also support groups out there, and many women find it helpful to share their thoughts and feelings with other women. Most of all, women with postpartum depression need to know that they are not alone.

Many first-time mothers experience the problem of postpartum depression after giving birth. It is a common occurrence for many women, whether it’s the first child or the third.

Having a child is difficult without the correct support group. The mother must find the correct help and support she needs before the child is born. This ensures she is prepared for any issues that might happen.

A State Of Mind

When the baby is born,  the mother must give all her time to care for this new life. She does everything for the baby to ensure they grow up strong and healthy. While she is doing this, she often neglects herself.

She may not eat or even shower on time anymore. All of this is done in the name of love. She may not even recognize or be aware of what is happening to her because she is so absorbed in parental bliss. The unconditional love of a mother for her child is the purest sacrifice.

As a parent, you want to give everything of the best to your child. It is a costly maintenance that includes taking care of their health, food, and education. Many parents start saving up for all their children’s expenses before they are even born.

They set up trust funds and put money away every month. This is intelligent thinking because, with the rise of inflation, the cost of living is becoming ridiculous.

Many parents who have young children opt to work from home. Recent worldwide events and technological advancements have made it easy for anybody to get work done in the comfort of their own homes.

Parents who do rely on daycare also have to ensure that the facility is adequately equipped. The child should be kept in a clean, safe environment and given healthy meals and nap time. A huge responsibility falls on the shoulders of the teachers to ensure that these basic daily needs are met.

Together For The Future

There are a lot of organizations that assist in helping parents get back on their feet again. Dealing with emotional issues helps them get a grip on real parenthood. Part of joining a post-Partum depression group, or even a normal parents child class, is to talk about the issues you find in raising children and find solutions to fix any problems.

Proactive parents take the first step in deciding their child’s future by seeking help. Although talking about issues is daunting at first, you may be surprised to find out how many other parents are going through the same thing.