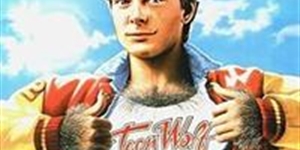 Looking back, there were a lot of things in the 80s that could be described as “so bad it’s good.” The music, the hair, that weird hamburger casserole your mom always made on Tuesdays. Basically, the entire decade can just generally be summed up as “so bad it was good.” And the movies were no different. 80s cinema was marked by terrible dialogue, contrived drama, and over the top action. And well, it was pretty damn amazing. These are the top five bad movies from the 1980s.

Ridiculous Tagline: “Just because Jonathan’s fallen in love with a piece of wood, it doesn’t make him a dummy.”

Okay, well maybe falling in love with a mannequin doesn’t make you a dummy, but it definitely makes you a total creep. In any case, Jonathan can’t help but love the work of art he created, and when she comes to life in the form of Kim Cattrall (long before she was making terrible puns on Sex and the City), things get interesting. Well, mostly just weird, because only Jonathan sees her as alive, but sort of interesting. With the help of his effeminate friend Hollywood Montrose (yeah, really), Jonathan must foil the store security guard and his cowardly bulldog in order to save the mannequin who is eventually (and pretty inexplicably) seen as alive by everyone. Then, obviously, they get married, oddly unconcerned with the fact that she used to be a piece of wood.

Ridiculous Tagline: “All he wanted to do was dance.”

So why couldn’t Kevin Bacon dance? Because the entire plot is driven by the fact that he’s moved to a town that has banned dancing and rock and roll music. Why? Because that makes the movie work, that’s why! If you’re into pure cheese, Footloose is an absolute must see. Complete with forbidden love, oppressive boyfriends, strict religious fathers, unbelievably slow games of tractor-chicken, and a solo warehouse dance scene that may unintentionally be the funniest three minutes ever put to film, Footloose is undeniably 80s-tastic.

Remember the original Rocky? You know, the one that was a character-driven Oscar nominee? Well, let’s just say that by the time they got to Rocky IV, they had lost some of their subtlety. After a merciless (and let’s not forget overtly stereotyped) Russian boxer kills Apollo Creed, Rocky must face him, essentially fighting and winning the Cold War in the boxing ring. Filled with more pop-driven training montages than you can shake a stick at, Rocky IV drains all of the genuine human element out of the franchise and replaces it with steroids. Oh, and Rocky is also now so rich that he buys Paulie a robot butler for his birthday. Yeah, this movie is pretty friggin’ great.

Ridiculous Tagline: “I feel the need, the need for speed.”

When it comes to Top Gun, you probably have genuinely fond memories of the heart-pounding action scenes, the sensual love scenes, and the taut drama. Well if that’s the case you may not want to go back and watch it again because you’ll quickly realize that Top Gun isn’t much more than a vaguely homoerotic music video ad for the armed forces. We’re talking full throttle 80s in every way. Cheesy music, fast-cutting montages and of course a silhouetted sex scene. But listen, that doesn’t mean we don’t cry every single time Goose bites the big one, that’s just rough to watch (almost as rough as that ridiculous beach volleyball scene).

Ridiculous Tagline: “He always wanted to be special… but he never expected this!”

The producers of Teen Wolf were so happy to capitalize on Michael J. Fox’s Back To The Future momentum that the promo posters for Teen Wolf literally said “He’s back from the future in a new comedy!” But if you look at Teen Wolf purely on its own, and we suggest you do, it is wonderfully heinous. A teenage boy hits puberty and becomes a man-wolf, which for some reason makes him great at basketball (we understand the strength and speed thing, but why would being a wolf improve his dribbling so drastically?), and quickly makes him the most popular guy in school. Just to clarify, if a teenage boy actually became a werewolf, he would be quarantined in a lab somewhere and/or burned at the stake, but back in the good old 80s, Michael J. Fox was simply a can’t miss.

Now go! Go off and watch every one of these movies and revel in their amazing 80s awfulness! They’re good, they’re bad, they’re both! But just as a recommendation, they all seem a little better if you’re wearing a good pair of leg warmers (or so I’m told). And if you think me missed out on some, you’re probably right, there were probably thousands of bad movies made in the 80s. But why not make a list of your own and fill us in on what other horribly good flicks we should be paying tribute to?
Must Read
Google Earth Images That Are Works Of Art
Deputy Didn’t Realize A Camera Was Filming Him
Repairs On Golden Gate Bridge Lead To Discovery