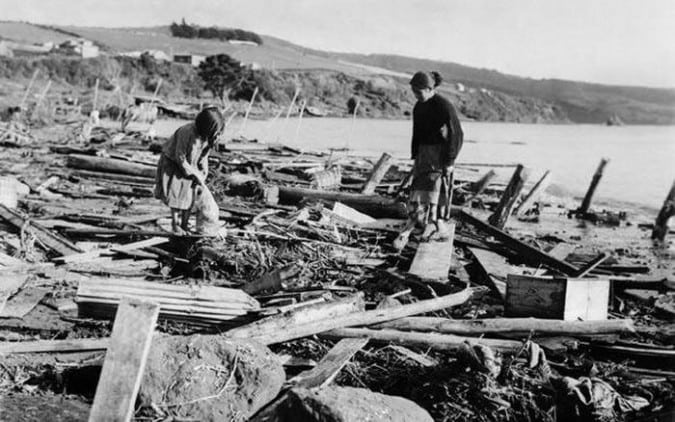 Earthquakes shake the ground all over the world, but the most destructive earthquakes don’t just do shaking. They cause other natural disasters, such as flooding, tsunamis, landslides and even volcanic eruptions. This amounts to significant destruction that includes millions of dollars in damage and thousands of lives lost. A destructive earthquake isn’t always massive in magnitude, but they cause massive damage and casualties because of where and when they strike.

Most surprising might be that none of the cities in this article are on the list of the top five most earthquake-prone cities. However, it may come as no surprise that the happiest countries to live in have avoided this list.

Here are five of the most destructive earthquakes in history:

The magnitude of an earthquake that occurred more than 400 years ago is estimated to be around 8, which isn’t as impressive as other destructive earthquakes. However, the Jan. 23 quake in Shaanxi, China, caused about 830,000 deaths in 1556, making it one of the deadliest earthquakes ever recorded.

This was because the earthquake occurred in the middle of a densely populated area with poorly constructed buildings and homes, resulting in a horrific death toll. Most of the people who died in this earthquake were crushed by falling buildings. As a result, many residents sought alternative ways to reduce the damage caused by such disasters by building houses made of softer, more earthquake-resistant materials, such as bamboo and wood.

Confirmed damage from the quake extended about 270 miles northeast of the epicenter, which was in China’s central Shaanxi province, although some reports of damage were more than 500 miles away.

The after-effects of the quake were felt across 97 counties, stretching over the provinces of Anhui, Gansu, Hebei, Henan, Hubei, Shaanxi, Shandong and Shanxi.

Most of the towns in the damaged areas reported that all houses collapsed as well. In the end, the destructive earthquake and its subsequent disasters wiped out an area about 500 miles wide.

A magnitude 8.6 earthquake shook the regions of Assam and Tibet on Aug. 15, 1950. Although its epicenter was in the Tibetan Plateau, the quake brought the most destruction to Assam.

According to the U.S. National Geological Survey, 70 villages in this region disappeared in the wake of the disasters generated by the quake, which included landslides and severe flooding, and resulted in a death toll of about 1,500.

It is one of the most destructive earthquakes in history and the sixth biggest earthquake of the twentieth century. The quake was said to have been caused by the crashing together of two continental plates.

There were several aftershocks after the quake, with most aftershock falling within the magnitude of 6.0. The surface wave of the quake was also felt in places like Eastern India.

Eight days after the first tremors, a natural dam on the Subansiri River burst, unleashing a 23-foot-high wall of water over nearby villages and killing more than 500 people. Seismologists as far away as England and Norway noted “oscillations” in nearby lakes.

A magnitude 9.2 earthquake devastated the Gulf of Alaska on March 28, 1964, causing mudslides in Anchorage and raising parts of outlying islands by as much as 36 feet. The earthquake is one of the most destructive earthquakes as well as the strongest in the history of North America.

The destructive earthquake brought a tsunami with waves as high as 220 feet and caused over 130 deaths and $311 million in damages.

The tsunami destroyed the village of Chenega, killing 23 of the 68 people who lived there. Survivors outran the wave, climbing to high ground.

As far away as the Louisiana Gulf Coast and Puerto Rico are from Alaska, they also felt the displacement of water.

The most powerful earthquake ever occurred in Valdivia, Chile, on May 22, 1960. It was not only powerful but it was also one of the most destructive earthquakes the world witnessed and was also known as the Great Chilean Earthquake.

The earthquake shook the world with a staggering 9.5 magnitude, leaving 4,485 people dead and at least 2 million homeless. The tremors caused a tsunami that destroyed the port of Puerto Saavedra, causing $550 million in damages.

The tsunami killed an additional 170 people with its 16-foot high waves that hit the coasts of Japan and the Philippines. The day after, the Chilean volcano Volcán Puyehue erupted and spewed ash for several weeks.

Meanwhile, prior to the 1960s earthquake, three separate earthquakes had hit Chile in the same year, with the last one, whose magnitude was sized 7.9, happening 15 minutes before the Valdivia earthquake.

In 2010, another 8.8-magnitude earthquake struck Chile. It is regarded as the fifth-largest earthquake ever recorded, and it resulted in damages worth $4-7 billion.

Known as the cause of the deadliest tsunami in history, the magnitude-9.1 earthquake that hit Sumatra, Indonesia, on Dec. 26, 2004, was one of the most destructive earthquakes in history, causing massive damage and death.
The force of the earthquake was said to be the force of 23,000 Hiroshima atomic bombs, and it also had the longest duration of faulting ever observed, between 8.3 and 10 minutes.

It caused the entire planet to vibrate as much as 1 centimeter (0.4 inches). Trillions of rocks were said to have moved as a result of the earthquake, making it one of the most destructive earthquakes in 40 years.

The tsunami was triggered by the Indian tectonic plate being pushed beneath the Burmese plate, though they are said to have been pushing against each other for thousands of years before the disaster eventually happened.

The tsunami caused by the earthquake hit 14 countries across Asia and East Africa. The tsunami traveled 3,000 miles to Africa and killed people and destroyed property there as well.

An amazing fact of the Sumatra earthquake is that there were no animal bodies found after the quake because some animals were seen moving to higher ground before the tsunami started.

Indonesia saw the most damage, and more than 227,000 people died. The final death toll is an estimate that took a month to establish.

In addition to the loss of life, some communities lost more than half of their fishing and industrial infrastructure, and the destructive earthquake resulted in more than $10 billion in damages.

READ MORE: If you are interested in natural disasters, you may enjoy reading about the top 5 most destructive hurricanes.