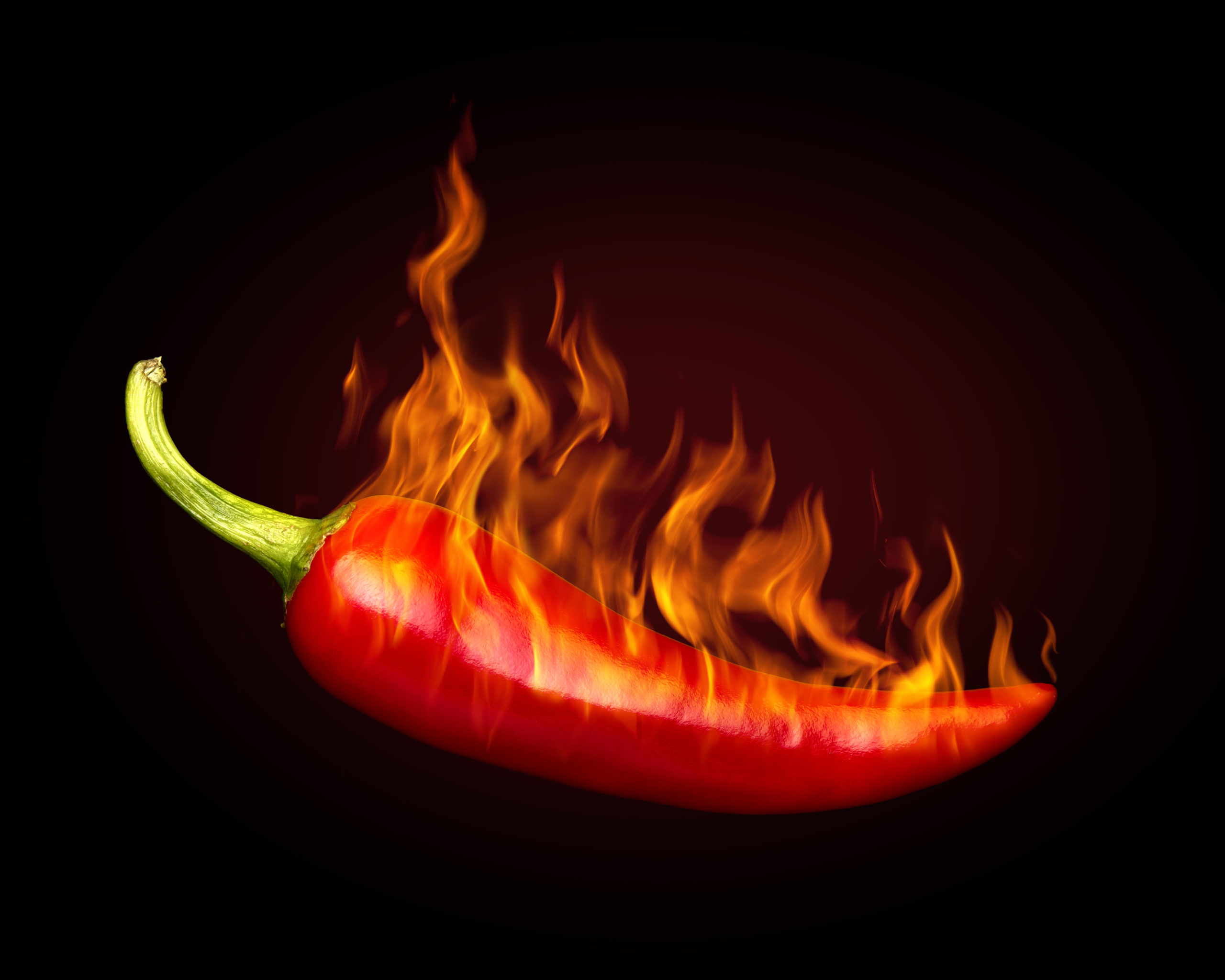 One of the simplest ways to land yourself in the hospital for damaging the lining of your intestines is to down some of the hottest peppers in the world. The pros use the Scoville heat units (SHU) scale to determine how spicy a food is by measuring its capsaicinoids, the mouth-on-fire compound found in peppers. If you plan to down the spiciest peppers ever tested by the Chile Pepper Institute at New Mexico State University, have a tall glass of milk or scoop of ice cream nearby. The casein in dairy products binds to capsaicin oils to help ease the burn.

Another hot mama from Trinidad, the Red 7-Pot easily turns seven pots of stew into molten lava with its 780,000 Scoville Heat Units. The chile looks like a small, wrinkled red bell pepper and has a fruity flavor, and its rarity prompts firebugs to grow their own plants. According to the Chile Town Hot Sauce website, the Red 7-Pot is an effective barnacle repellant when mixed with paint used to coat marine equipment.

The pepper that once held the Guinness World Record for hottest pepper before the Butch T came along, the Bhut Jolokia has 1 million Scoville heat units. The Bhut Jolokia, also called a “ghost pepper,” comes from India. A mature bright orange-red pepper is three inches or longer. In an article for “National Geographic,” Wasbir Hussain notes that people in India paint a solution made from the oil from Bhut Jolokia peppers onto buildings and structures to repel elephants.

With 1.5 million Scoville Heat Units, a mature Trinidad Scorpion is vibrantly red, up to 4-inches long and has a citrus-like flavor. According to the Scoville Scale for Peppers website, this pepper variety is difficult to find in stores, so chile fanatics tend to grow their own plants. This pepper gets its name from the scorpion tail-like shape on the end of its pod.

With 1.8 million heat units on the Scoville scale, the Chocolate 7-Pot comes from Trinidad. Also called the 7-Pot Douglah or Brown 7-Pod, the pepper is tomato-red to brick-red and looks like a habañero. The chocolate variety of the 7-Pot family of peppers is sweeter, but intensely hotter, than most of the other types of Douglah chiles.

Winning the Guinness World Record for the hottest pepper in the world in 2011, the Trinidad Moruga Scorpion “Butch T” has a blazing 2 million Scoville heat units. To put the heat into perspective, a jalapeño only has 2,500 to 8,000 SHU. Grown in Australia by The Chili Factory, the capsaicinoid levels of the “Butch T” are so intense that, according to the “Huffington Post,” the oils on the outside of peppers corroded the latex gloves of New Mexico State University students who harvested them.
Must Read
Baby Bear Refuses To Move Until Cop Follows Him
Perro No Deja De Engordar, El Cartero Lo Rescata
Hombre Se Encara Con La Limpiadora Por El Mal Olor De Su Casa, Le Muestra Las Imágenes De La Cámara