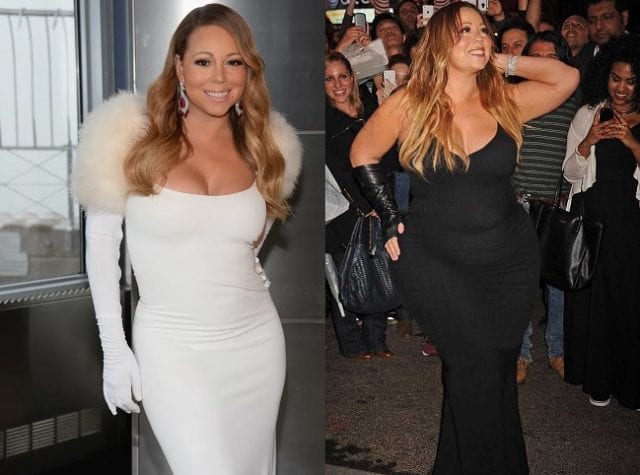 It’s no secret that Hollywood is body-conscious. The tabloids relish reporting about a celebrity who gained weight and how much, so is it any wonder celebrities are careful to avoid gaining any noticeable weight? However, some celebrities turn their noses up at media hype to pack on the pounds for the sake of their art. Some of the biggest celebrity weight gains caused these stars to transform their bodies to the point of unrecognizable.

These are the celebrities with the most shocking weight gains.

Throughout her career, Spears’ weight has fluctuated. Right now, she is in the middle of her Las Vegas show and it looks like she has put on a few pounds.

It’s normal for someone’s weight to go up and down when they are busy and don’t have time to work out.

Recently, Mariah Carey has not been seen much in Hollywood. When she reemerged, people started to say she gained weight.

The criticism got to Carey, so she underwent weight loss surgery to get her weight and life back on track.

You might not remember now, but Jessica Simpson was a sex symbol. She had a hot body that everyone obsessed over. Now that she is out of the spotlight, she has put on a bit of weight.

Simpson struggled with her weight after having her first child. She has fluctuated since then.

Christina Aguilera struggled publicly with her weight gain over the course of her career. She has even stated that she is not ashamed of what critics say about her.

The singer has been in and out of the public eye recently. The last time she was in public, people noticed that she put on a considerable amount of weight.

Clarkson won the first season EVER of American Idol, released a lot of hits and albums, and now is even a judge on the Voice. When she was first in the limelight, she was a skinny girl. Recently, she has put on the pounds.

When pressured to answer the question of why did she gain weight, the American Idol winner explained that a skinny body was a source of unhappiness for her. She also stated that she is more happy with a bit more weight.

This actress turned singer was young when she gained popularity on the Disney Channel.

After she got older and had a child, she gained weight.

Because of drama in the public about his relationship, he gained more weight.

The actress started out as a skinny woman when she first came into the industry.

Then, after she came back after having her first child, she gained a bit of baby weight while she was on set. We think it looks beautiful and natural on her!

In 2007, the model slammed the media after an unflattering photo surfaced of her.

The former model is no longer a size two. She put on the pounds after living life out of the spotlight.

Mindy Kaling is a short girl. It seems to be hard for anyone with her body type to maintain a skinny image. Since starting on The Office, it seems like she gained weight over the years.

There isn’t anything wrong with that. It seems like she is a lot healthier than when she was on The Office.

Critics said that Russell Crowe gained weight for a film, but there were claims saying that wasn’t true. Crowe’s weight gain did not make sense for the film, and he has not been working out or eating correctly in a long time.

The actor almost looked unrecognizable to people on the streets.

Pink isn’t the young girl singing empowering music to you anymore. She is a mom and apparently, she has said that she is comfortable in her skin and loves to cook on a regular basis.

The singer does not want the media to pressure her to lose weight.

For years, Gerard Butler was the fittest celebrity.

He stopped going to the gym and the star started to gain a lot of weight. He lost his six-pack and all of his muscle mass.

Alley’s weight journey has been in the media in years. She appeared on Oprah to share her story of struggling with weight gain.

Even though she lost over 75 pounds on the Jenny Craig program, she decided to part ways with them. After that happened, she gained all the weight back.

In the early 2000s, Travolta struggled with his weight. He let his weight get out of control for over a decade, but he was able to slim down a few years later.

Now, he looks happy and healthy.

Back in the day, Vince Vaughn was fit. Every guy wanted to be like him, and every woman wanted to be with him.

Over the years, the actor has gained weight since he has not been appearing in movies and TV shows.

When Jonah Hill first started in Hollywood, he was known as the overweight funny guy. He wanted to prove his critics wrong so he slimmed down in 2011.

The comedian said that getting back into shape was the best decision of his life. After he broke up with his nutritionist girlfriend, he gained all the weight back plus more.

The singer has struggled with her weight for a long time now.

She posted a video sharing her story about trying to lose weight after having her child. You’ve got this, Janet!

The actor gained weight due to the stress of putting his daughter up in rehab in 2015. It’s hard to imagine this ex-sex symbol not being in shape.

Thankfully, the 30 Rock star has since overcome the stress and is shed a few pounds here and there.

Although we lost this former Playboy model 10 years ago, Smith’s weight was always looked at as one of the most extreme cases of weight gain and weight loss in Hollywood.

He was known for his role in the Terminator movies, but he was also the 38th governor of California.

Since he is put behind his bodybuilding behind him, he has let his body slip away. He has gained weight, even though that’s normal since he is in his 70’s.

It might be said for some Star Wars fans to see Mark Hamill gain a lot of weight over the years.

He isn’t the young Luke Skywalker anymore. But once he signed up for the new installment of the Star Wars movies, he started training as a Jedi again.

Being a billionaire did not stop Oprah from gaining weight. Over 30 years, Oprah battle to stay off the celebrity weight gain list. She has always had an unhealthy relationship with food because that is how she copes with her stress and pressures of her daily life.

Because of a thyroid issue, the talk show host has gradually gained weight over the years.

How do you go from having a fit body to a dad bod overnight?

In a recent interview, the actor to admitted gaining weight because he can no longer stay in shape like he used to.

At one time, he played Batman.

Online trolls started bullying him after pictures surfaced showing he gained a ton of weight.

Are you shocked by these celebrity weight gains? Click the next button to see which women are the most hated women in Hollywood.