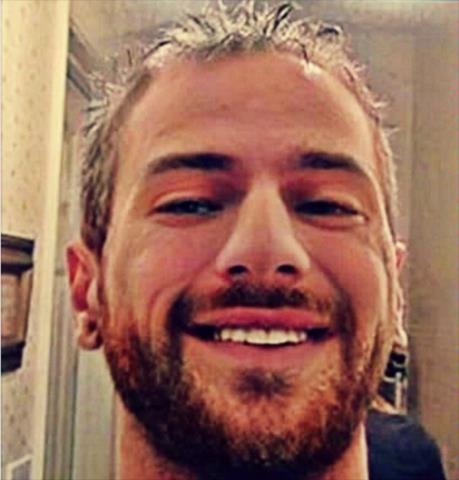 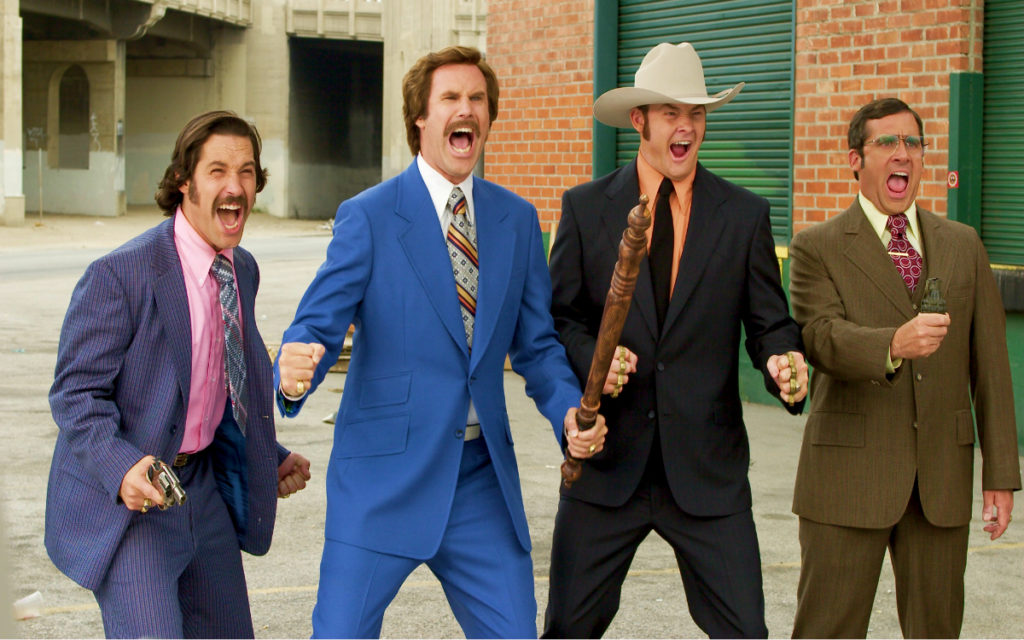 Comedy movies are always subjective pieces that can be amazing to some and terrible to others. Very few comedy movies are appreciated at the time they release. However, many end up actually doing quite well with critics. Meanwhile, others tank with critics yet get huge scores among normal people who watch it.

It is not very common to see a comedy film win an Oscar for best acting, screenplay, or even director. These movies are not designed for major awards, but rather just to make you laugh. Some accomplish this mission very well while others seem to try so hard, and fail every time. This is not uncommon among movies with all-star casts.

Sometimes the film needs a huge cast to get you to watch, and it turns out to be complete crap. Other times it works out relatively well with a ton of big names involved. Yet again, it’s all subjective with several opinions making up favorites. Many movies stand out as great with just about every movie watcher.

It is impossible to please everyone of course. However, this list will expose the top comedy films, regardless of era. You may even see your favorite make the list. This is our list for the top five best comedy movies of all time. Enjoy. 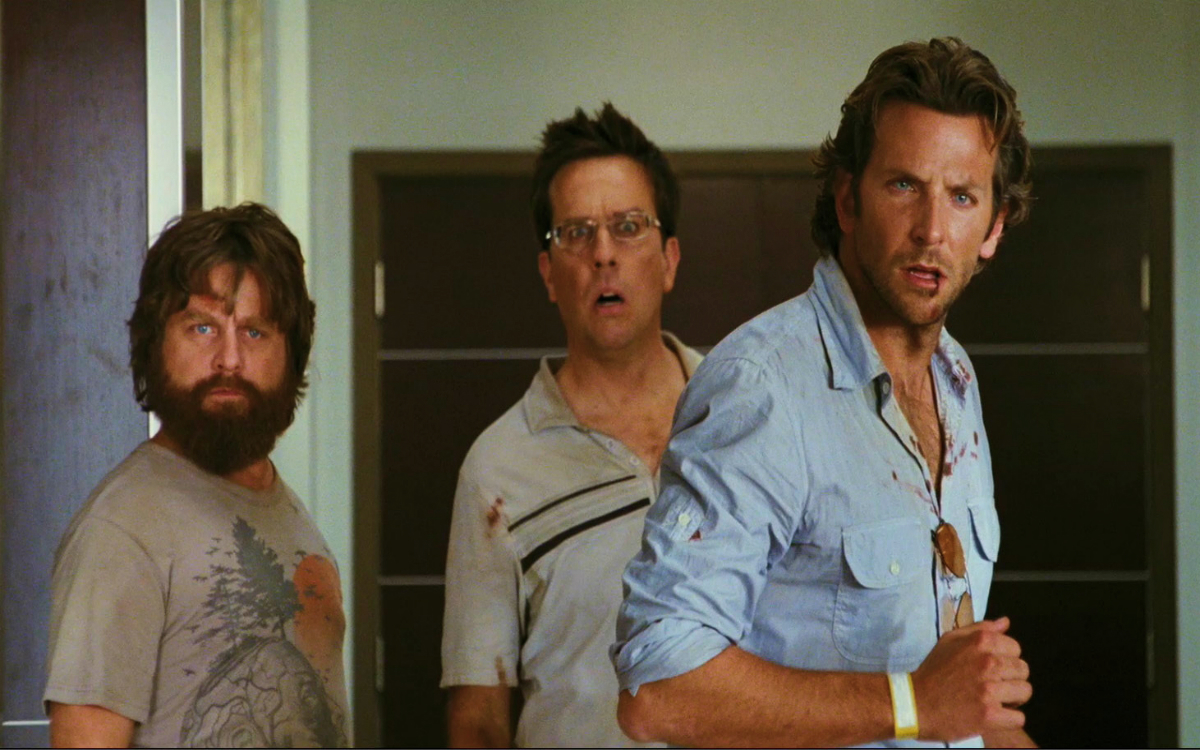 It is a film that helped to launch every main actor into super-stardom, with most starring in major roles afterward. Bradley Cooper, Ed Helms, and Zack Galifianakis are all now Hollywood heavyweights in comedy or drama mainly due to their roles here. The Hangover stands out as one of the best comedy films of all time because of everything it brought to the table. The idea was that a guy was getting married and his friends decide to have his Bachelor Party. Sadly, things go nuts and they lose their friend.

Waking up from the craziest hangover ever, they have to retrace their steps from the night prior to find their friend before his wedding. “The Wolfpack,” as they would come to be known, forms to find him. They then run into a drugged out Chinese man, played by Ken Jeong, and things get even crazier.

It is hard to fully explain all the nutso things you’ll see in this movie. But due to the fact that it has a wonderful cast, and the story is wild but hilarious, you would be crazy to not enjoy it. It spawned two sequels, which arguably couldn’t keep the magic of the first. Either way, it is a film you must see if you have not already. 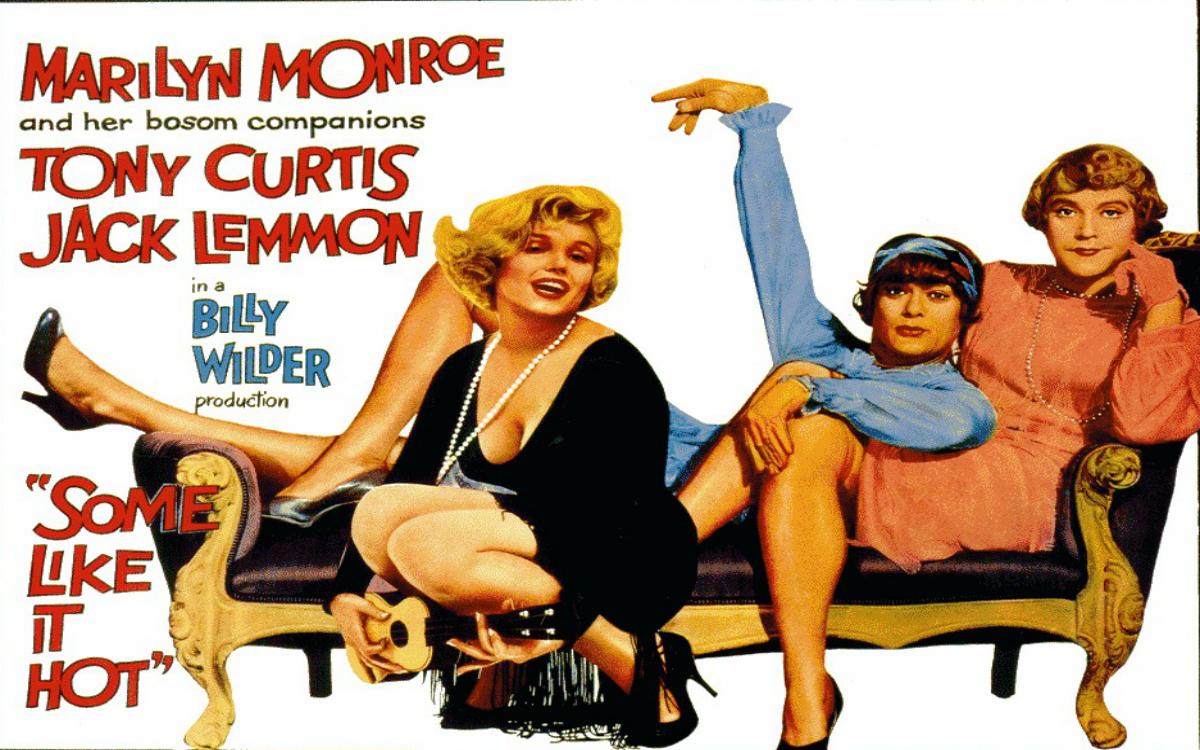 Tony Curtis and Jack Lemmon were two of the finest comedy actors of their time, and both were in their prime in the movie Some Like It Hot. The movie also stars Marilyn Monroe, and many feel it launched her acting career in a big way. Considered by many to be one of the best classic comedies of all time, it truly gave birth to many comedy acts we see today.

The movie revolves around two men who get caught overhearing things they shouldn’t have regarding the local mob. In order to escape from them and find their way out of their current situation, they dress up in drag and join an all-female band. Now disguised as women, both men have to make sure they are not found by the mob or their life could be in jeopardy.

Obviously, things don’t go that easy. It’s a comedy movie of course. Due to occurring in 1959, it involved some slapstick comedy along with situational. Both men were good speed comedians as well as physical ones. Monroe is able to hold her own with these two legends, which sets her apart among actresses in her day and truly says she’s not all sex appeal. The movie is absolutely amazing, with obviously a good cast, and a terrific script. It will forever rank highly among people who watch it.

Anchorman: The Legend Of Ron Burgundy 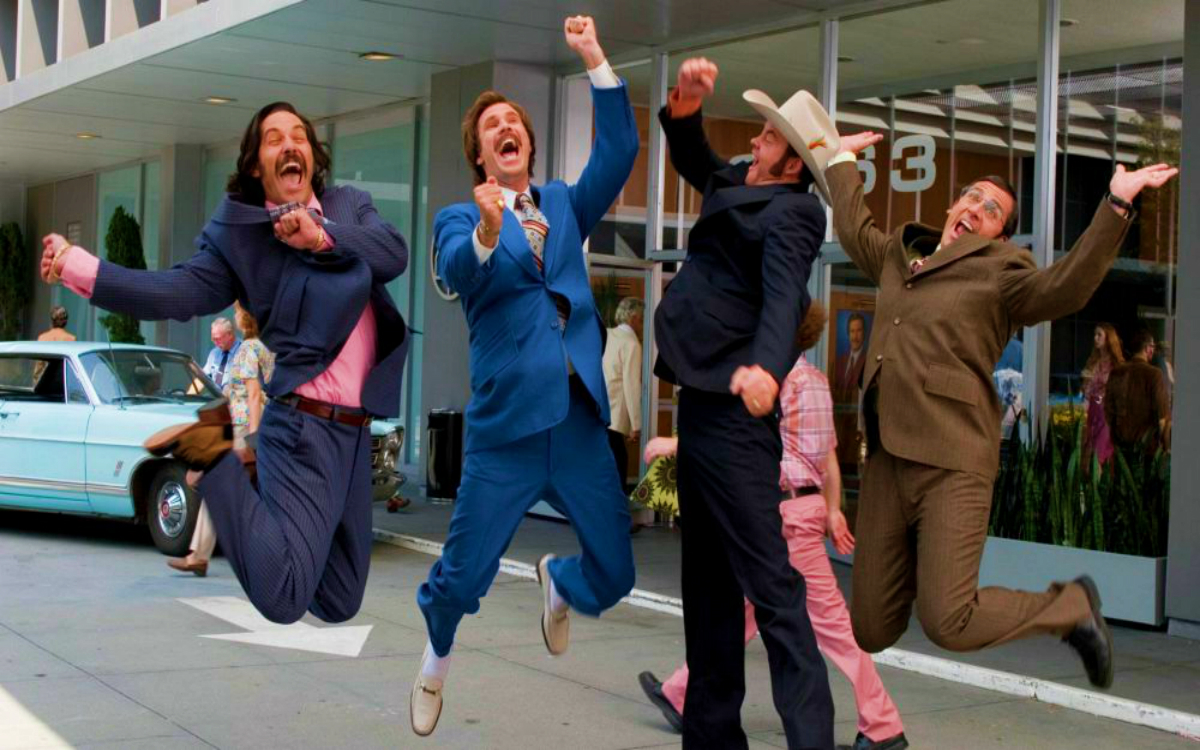 A cult classic when it first hit theaters, Anchorman: The Legend of Ron Burgundy stands out as one of the greatest comedy movies ever. Will Ferrell had proven his ability on Saturday Night Live, but along with writing partner Adam McKay, he would end up killing it in Hollywood due to his amazing comedy films. Anchorman was the start of it all, yet it did not originally do well at the box office. Once the movie managed to get to VHS and DVD, movie watchers would get a chance to see comedy gold.

Starring Steve Carrel, Paul Rudd, Christina Applegate, David Koechner, Fred Willard, Chris Parnell, and many others. Seth Rogan would even make a cameo, with a small role as a cameraman in the film. Truly, the cast could not have been more perfect the roles they would play. The movie focuses on Ron Burgundy and his news team. Every up and every down, you see the team struggle and come together.

Set right in the middle of the 70’s, a cultural shift is happening in the world and Ron along with the team is not prepared. Veronica Corningstone would come in and end up becoming co-anchor and eventually lead anchor, all infuriating Ron. He has to change with the times, all while being attracted to Veronica. It ranks as one of the best movies of all time possibly due to the several quotable lines it has.

You could ask anyone on the street about lines from the film, and it is likely they have multiple or at least one to use. When movies give you so much and they spawn a cult following, it shows how impressive the movie truly was. If you have not seen Anchorman, this comedy movie will make you laugh for years. Seriously. So see it asap! 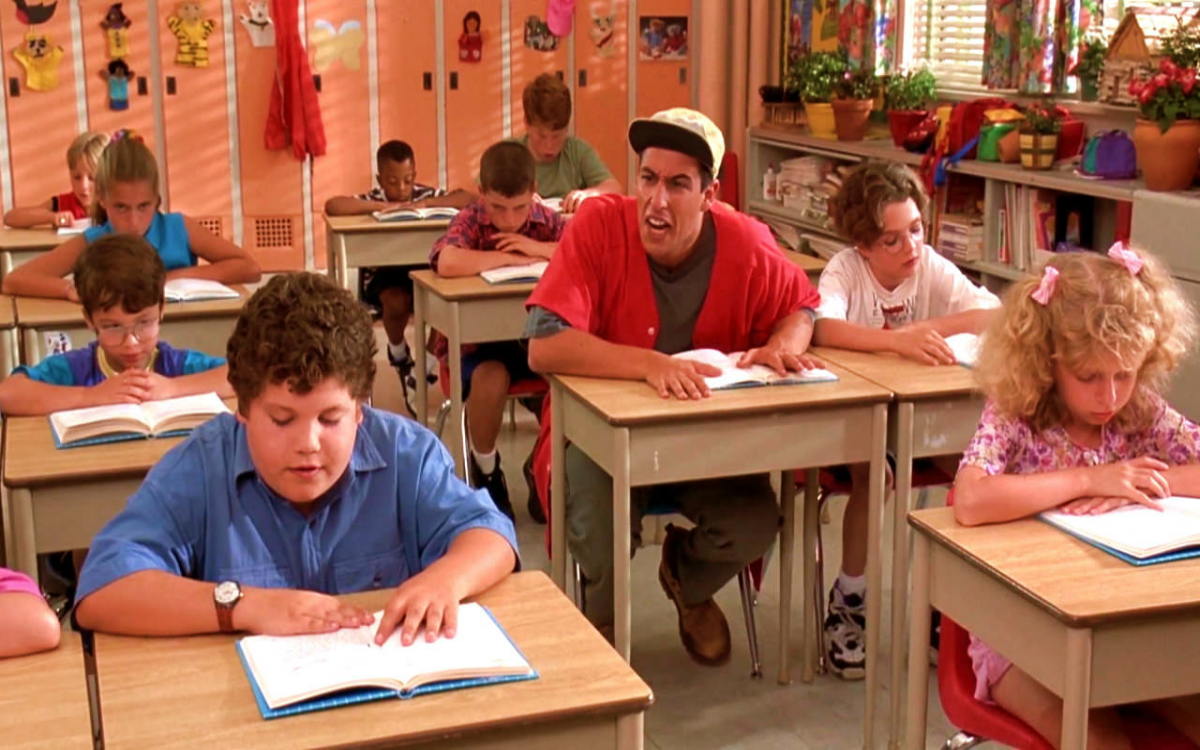 Like Will Ferrell, Adam Sandler also starred on SNL and also writes many of the films he stars in. Possibly the one that helped start his career in a big way was Billy Madison. While Happy Gilmore arguably did better for his career due to its commercial success, Billy Madison truly showed us something. It was able to prove Sandler had the chops to be one of the best comedy actors of his lifetime. He was also very young when all this was going down, allowing him to have a massive career ahead of him. Plus it was his first real solo movie, and without it doing well, we may never see the other movies.

The movie surrounds Billy Madison, a rich man due to being the heir to a major real estate company. His father wants him to take over, but feels he’s too much of a child to take on the responsibility and is considering giving the company to one of his best workers, Eric Gordon. No one seems to like Eric, and for good reason. Billy is told he can take over the business if he is able to pass school in the span of a few weeks.

He never finished, so he has to start from the ground up, all the was from grade school to high school. He then has to pass a major exam at the end, which turns out to be sort of a game show. The crazy things that happen in the film make it absolutely hilarious. It is a moments driven film, allowing Sandler to show off what would become his legendary style.

Comedy films don’t always do well with critics, and this one was no shock to the system. It did not do well at the box office either, but it did double its budget and profited despite a lot of unknowns being in the movie. It truly is hilarious and well worth your watch. 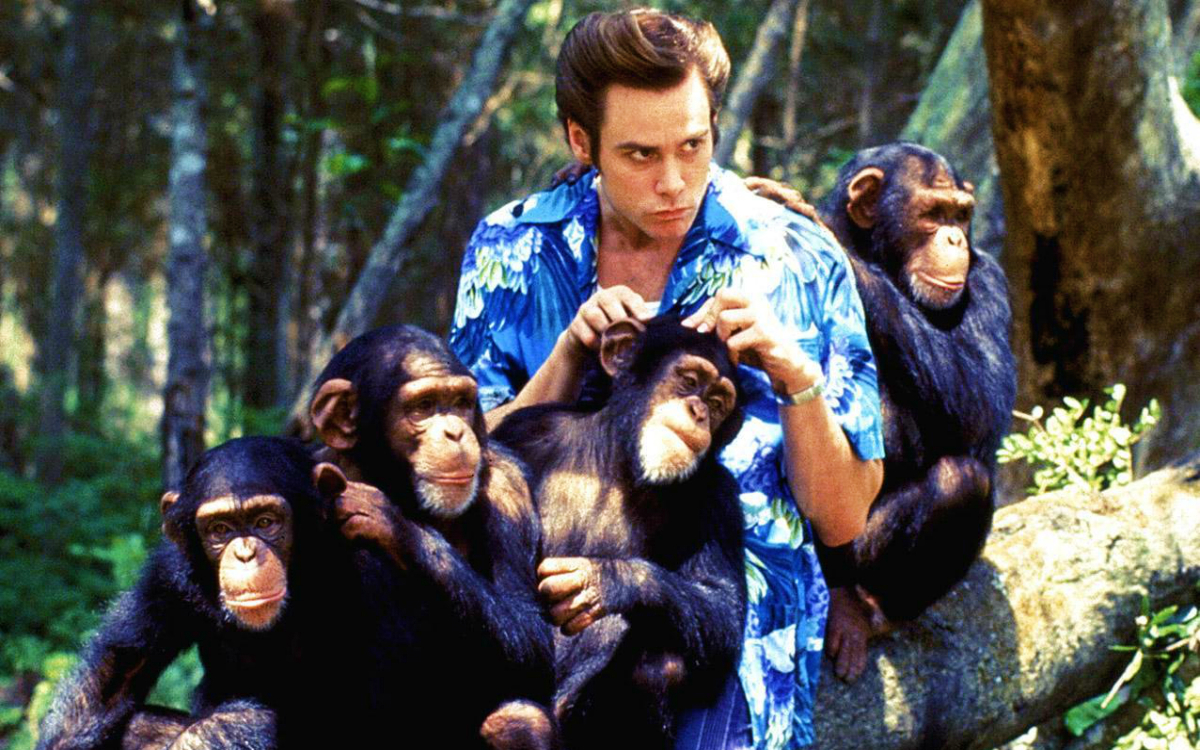 [Image by The Richest]

It is very rare that a sequel outdoes the original, but when it comes to the Ace Ventura franchise, the second film was better. The original film, Ace Ventura: Pet Detective, was a wild success with audiences and helped launch Jim Carrey as a comedy actor. However, Ace Ventura: When Nature Calls might be better. You start off the entire movie with Ace climbing a mountain and being found on a mosque with various animals. He is petitioned to help save a rare animal, and if he does he will help stop a way between tribes.

The animal turns out to be a bat, the one animal Ace hates. Go figure. Through the movie he has to basically be birthed by a Rhino, meets the Monopoly man, and has sexual relations with a female tribal member. He gets spears thrown into both legs, causing a meme that was very useful in 2016. If that wasn’t enough, he has to stop a tribal war by any means necessary.

The film has a lot in it, but it is absolutely hilarious. It really shows an improved and veteran comedian in Jim Carrey have one of the best performances of his career. His role in this movie still gets spoken about on a regular basis, proving how iconic this role ended up being for him.

How Did They Do That? Best Movie Makeup Effects 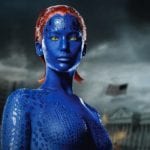