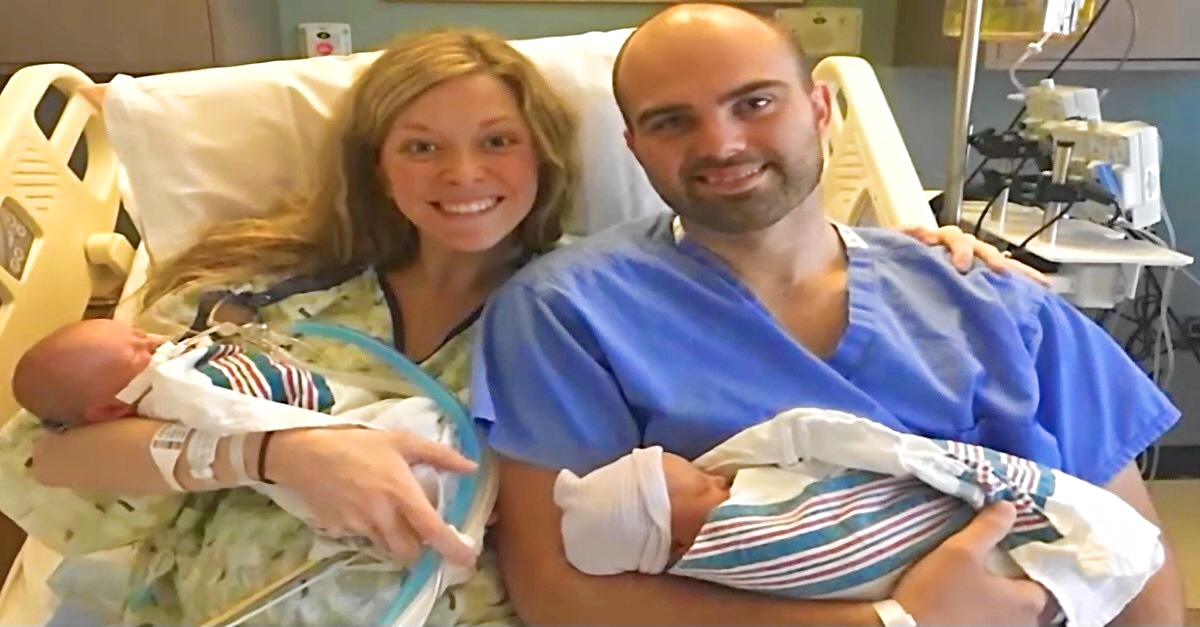 Matthew and Nicole patiently awaited the day they would welcome a new member into their family of two. After giving birth to her daughter, Nicole was ready for rest after 40 hours of labor.

In the middle of the chaos, her doctor ordered Nicole not to sleep, depriving her of her much-needed sleep.

The couple was the embodiment of a unit, for every step of Nicole’s pregnancy was planned by the two, starting from gender reveal to means of birth.

Everything surrounding her pregnancy seemed to be going great until her water broke on the 36th week of pregnancy, ruining everything they had planned.

It was a Monday night when Nicole felt her water break. Suddenly alerted by the situation at hand, Matthew rushed his wife to their car, getting ready to head straight to the hospital.

Nicole was planning to give birth weeks later, but her water broke prematurely, making them fraught with worry.

To Matthew’s luck, the city was hit by a heavy blizzard, forcing him to snowplow the driveway before starting their 2-hour long drive to the hospital. By the time she reached the hospital, Nicole’s panic level was through the roof.

Despite changing some of their plans, the couple was still set in their ways when it came to vital steps.

Arriving at 4 am, the couple directly refused the help of any medication. They still wanted to have a natural birth of some sort. Their stubbornness soon changed after seven hours of being dilated only seven centimeters.

While waiting patiently alongside his wife, Matthew witnessed something that broke his heart.

Matthew wrote on his Facebook page, “We had another check at 11 am, and she was still at 7cm, and for the first time ever in my life, I saw the look of giving up in my wife’s eyes, and it absolutely killed me.”

For the first time, the couple took a decision that deemed them not united.

Regardless of Nicole’s medication refusal, Matthew knew that something had to give. He then demanded that Nicole take Pitocin.

After a long debate between the two, Nicole agreed to start with a small dosage. The result was that they had shown the couple exactly what they needed to do.

After taking such a small dose, her dilation started progressing, reaching up to 10 centimeters. Nicole’s pain started kicking in, with her voice ringing in the entirety of the hallway.

Unable to endure any more pain, Nicole questioned the moral standard she had set up for herself before taking a decision that seemed inevitable.

After struggling for almost four hours, Nicole finally decided to have an epidural to help her with the enormous amount of pain she was experiencing. Following 40 long hours of struggling with childbirth, Nicole put out her last push as her daughter Blakeley Faith Ziesemer came into the world.

Nicole was ready to rest when the doctor said something that alerted everyone in the delivery room.

Feeling the exhaustion set in, Nicole was ready to rest and recover from the 40 long hours she pushed through. The doctor then directly demanded, “Push!” making everyone in the room look at him in complete confusion.

Putting her trust in the doctor’s hands, Nicole resumed pushing with tears of exhaustion running down her face. She did not understand what was going on or what she was even pushing out, as she had already given birth.

Moments later, Nicole heard something that shocked everyone in the delivery room.

Cries of a second baby echoed in the room, leaving the couple in complete shock. The two did not do an ultrasound and did not in any way see this coming. “Congratulations, you have twins,” the doctor said with a big smile on his face.

The couple looked at each other with mixed emotions.

Just like any parents, Matthew and Nicole wished they were prepared, for they only bought one of every baby item. Nevertheless, after meeting their son, they felt at ease knowing that no matter what, they would make things work and would raise their children with so much love and care.

After telling their friends and family the news, they got a reaction that they did anticipate.

Once the news spread amongst their loved ones, the couple was surprised with baby presents that made most of their worries go away.

Everyone pitched in to get the couple a set of items they needed for their unexpected baby making their hearts fill with the love and support they had for them. Cade Matthew and Blakeley Faith continued to shock their parents.

As the twins grew up, the couple noticed the strong bond that existed between the two, as they almost took care of each other at times. The children’s strong bond brought the family even closer together, making them appreciate the everlasting tie of family.

Surprises are sweet and may be overwhelming at times, but sometimes they are all that is needed to turn a challenging situation into the best experience. In Milwaukee, Wisconsin, a similar yet very different occurrence took place.

The road to having their first child had been perfect for Grace and Henry. They had a wonderful home in one of the city’s safest neighborhoods, with green lawns and a beautiful cul de sac where their kids would play one day.

The two had been together for six years before tying the knot. And even then, they knew they wanted to have a big family. They had no idea what fate had in store for them.

A Good Start To The Year

Grace and Henry found out they were pregnant three months after their honeymoon was over. The two were beside themselves with joy, seeing their dream finally come true. They even started decorating a room in their house for the baby.

But their happiness would soon turn into surprise when they discovered what was truly happening. By then, it would be too late to go back.

Life changed drastically for Grace and Henry after they got pregnant. Grace, who had been working as a clerk, started clocking in fewer hours at work so she could focus more on her baby bump.

On the other hand, Henry took on more responsibilities at work, looking to cover the financial gap left after her wife changed her working schedule. The new system would threaten to break their marriage apart.

Grace and Henry had only been married for half a year when the troubles started streaming in. The first was the consequences brought by their new working situation.

Although Henry supported his family, he spent less time with Grace, which brought friction to their love life. It wouldn’t be long until the pressure caught up to them.

Grace didn’t mean to yell at Henry when he got home at night, asking why he was rarely at the home of late. Henry was tired and didn’t take the time to hear her out.

The lack of communication would lead to the biggest fight in their marriage. Were the two ready to destroy their lives together before it even started?

Grace kept quiet as her husband talked to her. She apologized for her outburst, and seeing how remorseful she was, Henry stepped up and asked for forgiveness.

She was the love of his life and the mother of his kid. The last thing he wanted to do was hurt her in any way. But what he said left her in tears.

“I am so sorry for not being attentive,” Henry said. He placed a hand on Grace’s belly and kissed her forehead. “We are in this together, forever and always. I know we’ll find a way to make all of this work.”

True to his words, he pushed for a work-from-home model, ensuring he was still working while staying by Grace’s side. But the issues wouldn’t stop there.

The First And Second Trimester

Although Grace and Henry were fixing their marital problems as soon as they reared their nasty heads, the issues were slowly tacking on each other.

The biggest of them centered around pregnancy. Grace had been healthy at the start of her trimester. But everything changed as she entered the second. The issue would change their lives forever.

Grace and Henry did not rule out the possibility of complications regarding their pregnancy. But like any expectant parent, they hoped nothing would go wrong.

But one day, a sharp belly pain woke Grace up. She cried out to Henry, who was still sleeping. He didn’t waste any time, taking her straight to the hospital. What’d they’d discover would leave them heartbroken.

The couple went into the emergency room, where a doctor tended to Grace. After a few tests, she asked them to wait for thirty minutes.

The wait was long for Grace and Henry, given how worried they were about their baby’s state. The pressure built as the doctor walked back to them, a solemn look on her face.

“Mr. and Mrs. Jones,” she began eloquently enough. “The stomach pains you experienced were due to your wound expanding, which is common in the second trimester.”

“The pain might spread from your lower abdomen to your hips and groin, which is also expected. But it is important to come in whenever the pain starts.” Grace and Henry breathed a sigh of relief. Little did they know that the doctor was far from finished.

“But there is something we caught while running the tests,” the doctor said, her smile receding. “When was the last time you came for a check-up?” She asked Grace.

“A few weeks ago,” the momma answered, looking up at her husband for confirmation. When Henry nodded, she repeated her answer. What the doctor presented didn’t make any sense.

“The last ultrasound had detected a single fetus within you,” the doctor continued. “It’s dated three months ago.”

“Is there a problem?” Henry asked, a sheet of sweat covering his forehead. The doctor didn’t answer. She only pointed at the seat next to Grace. “If you wouldn’t mind taking a seat, Mr. Jones,” she said.

Three In The Oven

With thinned lips, the doctor slid a dark ultrasound sheet. “It seems you guys are having triplets,” she said as she leaned back.

Grace picked up the sheet. Her eyes were wide open as she stared at it. This was a miracle, especially after they’d spent the last three months knowing they had one kid. But although the moment was a happy one for them, it presented a challenge they were unprepared for.

Grace and Henry had spent months optimizing their lives for a single child. But now they had to change everything to accommodate two more. They bought more baby courts, freed up a guest room for the three kids, and redecorated it.

When the time came, Grace had a successful delivery, bringing three of the prettiest girls into the world. As Henry cradled them by his wife’s side, he knew his life would never be the same.