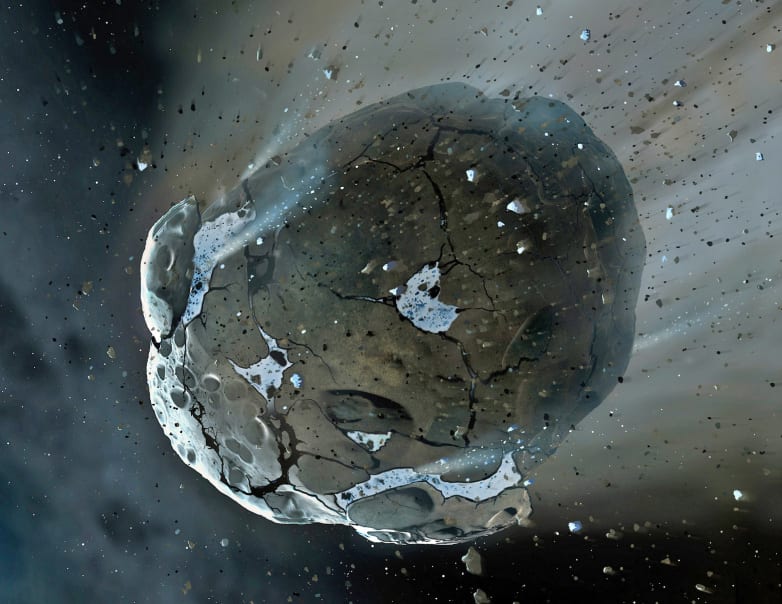 For all we know, right now a huge chunk of killer space rock could be hurtling toward Earth and will eventually end all life as we know it. A big enough collision might even send our world hurtling out of orbit and destroy the whole planet, and there are several near-earth objects that could ruin our day.

Fortunately, the universe is a pretty big place, so there is lots of “empty” space through which comets and asteroids can go hurtling about without smashing into planets. But at some point, we could have another Cretaceous-Paleogene Extinction Event type of impact. Until that happens, we can wring our hands over these close near-earth objects.

2009FD is one of the newest near-earth objects that have been discovered, and this asteroid has the potential of hitting the earth on five different occasions.

The probability of this asteroid hitting the earth is one in 4345 chances. The time frame it could hit is from 2185 to 2196.

Fortunately, the probability of the huge asteroid hitting the earth is 1 in 2,700.

This is an asteroid that has been investigated by a lot of scientists because of its gigantic nature.

This giant rock is feared to hit the earth by 2880. It could cause a lot of damage, but it wouldn’t cause the extinction of the planet’s population. We hope this one of the many near-earth objects steers clear.

This is one of the near-earth objects that could wipe out the earth. This asteroid has a low probability of hitting the earth between 2094 and 2112.

2018 AE2 has an impact velocity of 53,000 miles per hour and has high destructive power (about half of the world nuclear arsenal). If this body strikes the earth, the smoke and ash from the explosion would dim the sun’s flux on the earth.

2017 YZ1 is one of the asteroids that will keep crossing the path of the earth and scaring us. This 100-foot wide asteroid has been reported to have a non-zero chance of hitting the earth.

Due to the width of the asteroid, it could create a cataclysmic explosion that would mess up the earth. Fortunately, this one on our list of near-earth objects couldn’t cause extinction.

This is one of the most dangerous near-earth objects.

The periodic rain is not the name of the normal rain we experience. It is an asteroid named 3200 Phaeton and is close to the earth. 3200 Phaeton is a weird asteroid rumored to be the source of the Germinid meteor shower that is 3.61 miles wide.

Scientific predictions said that it will create dust that will rain down on the earth periodically. 3200 Phaeton is a potentially hazardous asteroid.

2017 XO2 is a 330ft wide meteor that has been crossing the path of the earth for years.

This is one of the near-earth objects that continually makes threats. There is the probability that collision might occur within the month of April in any of the following years: 2041, 2047, 2053, 2059 and 2065. This regular threat might continue swinging around the earth until the incident occurs.

5.) Saying Hi to the Neighbors

In mid-October of 2014, our nearby friend Mars is going to be visited by a comet called C/2013 AI. This near-earth object is also known as Siding Spring.

While we’re not sure who thought up the name Siding Spring for this hurtling ball of cosmic ice, we do know that S.S. is going to come within 68,000 miles of the red planet. For perspective, the earth’s moon is around 240,000 miles from us. There is little probability that the comet will strike Mars, but as near misses go, this one is a close call!

There is about a one in ten chance that a little asteroid named 2010 RF12 will slam into our atmosphere at some point in the future.

Thankfully, that future will be around the turn of the 22nd century. Despite the many close passes 2010 RF12 will make, this one of the near-earth objects is small enough that it would almost surely burn up in the atmosphere, creating a fine fireworks show and nothing more.

3.) The Second Time Around

In that year, Apophis will come calling a second time. For a while, scientists thought it would actually merit an attempt to change the direction of its travel. So yes, it would have been something like the movies Armageddon and Deep Impact. Only more entertaining and scary, probably, considering the damage that this one of the near-earth objects could do.

2.) A Little Fellah Who Packs a Punch

Asteroid 2013 GM3 is only about 60 feet across, which is not exactly impressive compared to some of the other near-earth objects and celestial bodies flying around out there in space. But 2013 GME is going to pass within fewer than 4,500 miles from our planet’s surface in April of 2026. That’s about as close as it gets in terms of near-earth objects.

And guess what? The meteor that exploded over Russia injuring thousands? It was smaller than this asteroid.

No, we’re not talking about the venerable Queen Elizabeth the Second, the beloved long-reigning queen of the British Empire. We’re talking about an asteroid named 1988 QE2 that is hurtling past Earth!

This non-monarch QE2 is just less than 2 miles in diameter (the dinosaur killer was twice that big, for the record) and will be more than 3 million miles away at its closest. In galactic terms, that’s pretty close.

If you like learning about these kinds of things, click next to learn about the most dense objects on the planet.