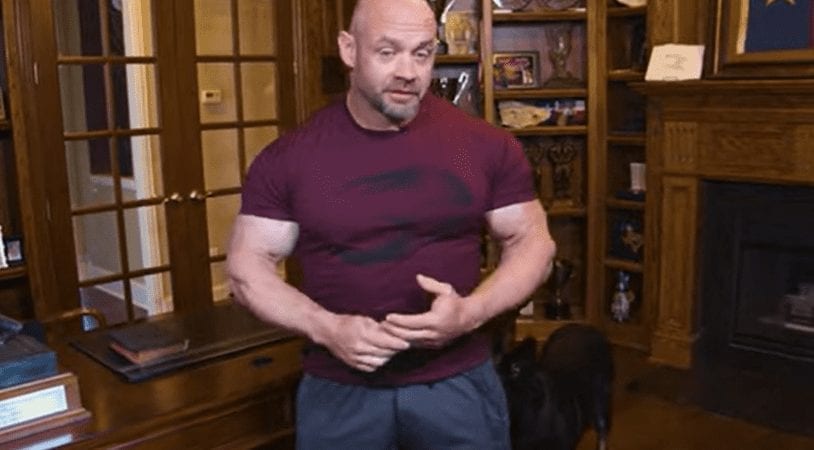 He rushed back into the office clamoring for answers. People tried to find out what was going on as he confronted the principal’s assistant. The principal, however, was unconcerned.

The principal smugly pointed to a paragraph in the school’s rules and continued to defend his decision. He wasn’t going to back down but he had no idea who he was dealing with. This dad had a point to prove, especially since the principal was completely wrong.

February 24th had started out like any other day when Nathan took his daughter Jamie to school like he did every day. It was a new term and a new school for Jamie as the family had just recently moved from Florida.

The Christian school that Jamie was starting at had some new rules that were somewhat different. Nathan had no idea that he was about to become angrier than ever before.

By the end of the day when Jamie got on the bus to go home, she had endured ridicule and embarrassment like never before. When Nathan saw her arriving on the bus Jamie was sobbing.

Nathan immediately knew something was wrong but when he looked closer he was horrified.

The Wrong Man To Mess With

The moment Nathan Thomas saw Jamie’s tear-streaked face he knew that someone was going to regret this. He would not take this lying down. This wasn’t the first time he had to deal with something unjust.

As far as he was concerned, the school’s actions towards Jamie were not only unacceptable but also criminal.

Nathan immediately noticed that his daughter was wearing no pants anymore. He rushed straight back to her school. He was determined to find out why they had sent her home without pants on.

They had no idea who they were about to deal with.

Nathan took Jamie home to her mother before racing back to her school. He was furious as he pulled into the school’s parking lot. He was thinking of everything he would do to the person responsible.

His weightlifter’s muscles rippled as he clenched his fists in anger.

Straight To The Top

Nathan stormed straight into the principal’s office where he met the principal’s assistant. The assistant began to stammer a response when Nathan angrily asked to know why Jamie had been sent home without the pants she’d worn when she got to school.

He demanded to know what was going on.

“I asked the assistant principal why my daughter was sent home in just panties and a T-shirt, and she begins to tell me, ‘We thought she had a long enough shirt to be able to put her on the school bus and send her home,” Nathan, still furious, recounted.

Nathan wasn’t satisfied with that answer at all.

Nathan wasn’t about to let go. He kept on interrogating the assistant for a proper answer. “Where are my daughter’s pants?” he shouted at her. That’s when the assistant said that they had confiscated her pants.

Nathan wasn’t sure what they meant but when they finally explained, he was completely caught off guard.

Nathan knew that it couldn’t be a dress code violation. He knew that her pants had been long enough to pass all the rules. The school was trying to justify what they had done but how could making her wear only panties and a shirt be better than what she had been wearing?

It didn’t make sense to Nathan. Finally, the principal approached.

Nathan turned his attention from the assistant to the principal. He hoped that the principal would take responsibility and explain what was going on but he was simply ignored. Instead, he simply sauntered over to his desk and pulled out a copy of the school’s rules.

With a look that said “checkmate” the principal placed a copy of the contract Nathan had signed and the school rules on the desk.

The paragraph that the principal pointed out to Nathan read: “Parents who enroll their children in our school know upfront that we ask the students to adhere to a lifestyle informed by our Christian beliefs.” Nathan read the text and looked at the principal uncomprehendingly.

How did this apply to Jamie’s pants? That’s when they pulled out the offending pair of pants.

The principal handed him the pants, which had a colorful rainbow print on it saying: “This is why.” Nathan didn’t understand at all and shouted: “What am I looking at?” Jamie loved rainbows, this much Nathan knew.

thatHe still didn’t see the problem. Then the principal said it plainly and Nathan couldn’t believe his ears.

Reason To Be Angry

“We do not endorse LGBTQ pride,” the principal stated. Nathan was gobsmacked. He didn’t understand. Did the school really think that making her wear no pants was better than a rainbow print? It’s no secret that the rainbow is frequently associated with the LGBTQ community.

Jamie wasn’t part of the community at all. She was only nine-years-old and Nathan didn’t see that it mattered even if she was. He couldn’t believe his ears.

Nathan, who is a bodybuilder with a YouTube following, used his fame to highlight the issue of intolerance — an issue he never expected to find in his daughter’s school. Jaimie’s clothes had not been intended to represent the LGBTQ community and featured an innocent rainbow print that his daughter had liked.

The school has been hurtled into the spotlight. According to Nathan, everything from the rule itself to the way the school dealt with the issue was just plain wrong.

More Than One Reason To Be Furious

Aside from the blatant discrimination, Nahan was most furious about how sending his daughter home with no pants could have made her vulnerable to predators.

He said that nothing had ever happened like this at her previous school. He hired a lawyer and intends to make the school pay for what they did. But is he right?

Needless to say, this incident has also made Jamie’s parents concerned about what is going on in the school behind closed doors. “Now that we come here, we have all these issues. There’s obviously something more going on than what we’re seeing.”

Parents who heard about the way the school had treated Jaimie were furious, too. Could the school have handled things differently?

Jamie’s mom brought up another good point. Why didn’t the school call either of the parents rather than leave the girl to be embarrassed the entire day?

“There are four contacts on our daughter’s emergency card. Pick up the phone and call us. We will come to fetch our child,” she said, angrily. But what do other parents have to say?

Concerned parents voiced their views on the matter. One comment read: “They did WHAT!!!! This is unacceptable… someone better be punished if not sued. This isn’t something that’s just going to go away this child will be haunted her whole entire life. They should’ve called the parents to come and get her!”

But how did the school respond to the backlash?

The school issued a statement, which implied that there were plenty of other options if Jamie’s parents had not wanted her to attend a school with “Christian values.” They stand by their decision, stating that they will not tolerate violations of the school’s code of conduct.

Needless to say, Jamie’s parents are looking to enroll her elsewhere.