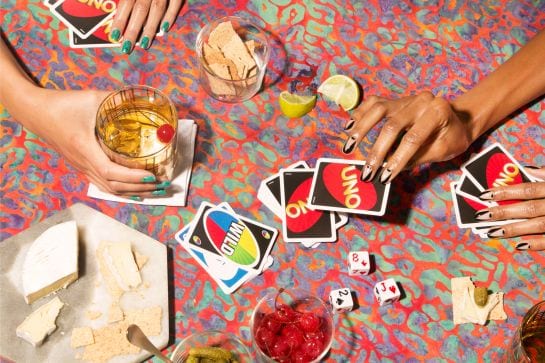 College might be long over for some of us, but fun times drinking with your friends doesn’t have to be! We’ve all heard of popular drinking games like beer pong, flip cup and kings. You probably even played a few when you weren’t so…you know…”grown up”.

The days of drinking until 5am and somehow still showing up to class on time might be over but games don’t have to be! Drinking games aren’t just about getting wasted. They’re also about hanging out with friends, letting your hair down, drunk conversations and uncontrollable laughter.

Adulting can be hard. Just in case you need another reason to drink here’s a break down of five fun drinking games to play with your friends this summer. Cheers!

This drinking game is an upgraded version of Jenga that is sure to get you and your friends more than a little tipsy. Try not to topple the Jenga tower or you’ll have to chug that last drink!

1.) Start by gathering your supplies. You’ll need 54 Jenga blocks, a group of friends, drinks of choice, a sticky note pad and a pen.

2.) Divide the Jenga blocks evenly. Each player writes down one drinking rule on each block. Unless you want to write them directly on the blocks use your sticky pad. Examples: “take a shot” or “take 3 sips”. Make sure you mix up the rules so you don’t all get wasted in two or three turns!

3.) Once all the blocks have rules written on them it’s time to build the Jenga tower.

4.) Using one hand, players must carefully remove a single block at a time. If the block is successfully taken out, the written rule on the block must then followed.

5.) If the structure falls, then the player responsible for the demolition must finish their drink and the game begins again.

Here’s a drinking game that quickly turns into a tongue twister. Pay attention or you’ll be drinking all night long!

What You Need: Drink of Choice and Some Friends

1.) Sit in a circle with your friends. 5+ people is recommended.

3.) The person to their left then says “ducky fuzz.”

4.) The third person then goes back to “fuzzy duck.” This continues until someone says, “Does he?” at which point the game changes direction.

5.) You can’t say “does he?” after someone else has just said it and once you say something wrong or stumble, you have to drink.

What You Need: Friends and Drinks

1.) Before everyone starts drinking choose someone to play Mr. Freeze.

2.) Go about your party business.

3.) At any point during the night, the chosen Mr.Freeze can freeze. As soon as you notice, you have to freeze as well.

4.) The last person to notice and freeze has to do a shot.

5.) Then you pick a new Mr. Freeze and start over.

Ok so this game is really just pictionary played with a lot of drinks but it’s a whole lot of fun! It’s also the perfect game to liven up a dinner party. You might want to brush up on your drunk drawing skills for this one though or you’ll end up totally wasted.

1.) Each round, someone new is the timer and someone else is the drawer.

2.) The timer whispers a word to the drawer.

3.) On a large pad of paper, the drawer has to draw that word to the best of their ability. Everyone else shouts out guesses as to what the drawing is.

4.) When someone guesses it, the timer stops the clock. For every 20 seconds it took before someone guessed it, the drawer has to take a big sip of their drink. Example: one minute would be three big sips.

*If people give up guessing because your artwork is a little too “abstract” you have to do a shot.

5). Then it’s someone else’s turn to be the drawer and the old drawer becomes the timer.

This drinking game became a party staple after appearing in the hit show New Girl. It’s the perfect game to play with your “grown up” roommates. Bottoms up!

“Well, it’s more like 75 drinking, 20 Candy Land and by the way the floor is molten lava.” -Schmidt

“It’s actually 90% drinking and then it’s got a loose Candy Land-like structure to it.” -Winston

What You Need: A Large Space with some furniture (living room is perfect), 1 Liquor Bottle, As many empty beer cans as you can find (ideally two different brands), Friends eager for games and drinks

1.) On a table in the center of the furniture you and your friends build a castle made out of alcohol.

2.) Put the liquor bottle in the center of the table. It’s “the King”.

3.) Line the beer cans in four rows stemming out from the King. These are “the Pawns”.

4.) Surround your castle with four access points that are made out of furniture. Then make a circle around the access points of out of more varying furniture pieces. The players will need to hop on the furniture, because duh- the floor is made out of lava.

5.) A player yells “One, two, three, JFK” to start the game, at which point all the other players yell “FDR,” grab a Pawn from the castle (that’s a can of beer) and retreat to any piece of furniture.

6.) Everyone must jump from furniture to furniture in a clockwise direction.

7.) The person whose turn it is has to move from one space to the next by completing tasks with patriotic themes.

8.) Every time a player gets to a center piece, they take a Pawn.

9.) Once all Pawns are removed, the King is vulnerable. The firstplayer to land on one of the center pieces, finish their beer and take a swig from the King wins the game!

Decided to revert to Beer Pong? These Are the Best Beers for Those on a Budget.