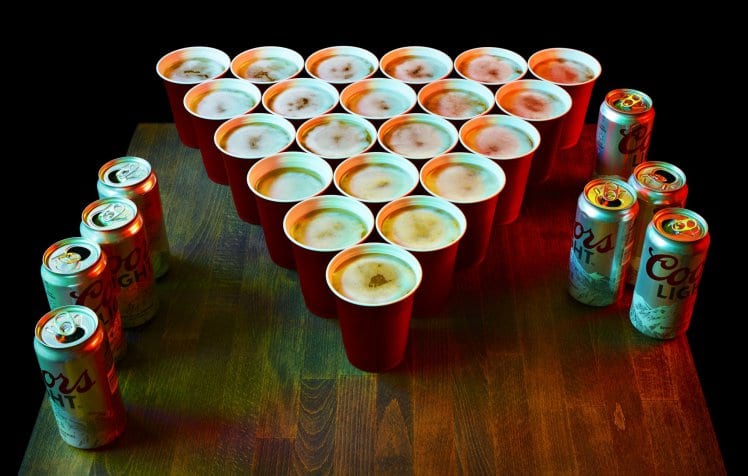 Yes, we meant cheap beers. That is the subject of the day. At its core, the word cheap means inexpensive and should not necessarily be seen as always pejorative. But, let’s face it cheap usually means bad quality.

So Cheap beers? Not as good as more expensive beers. There may be exceptions to that rule but they are flukes. The reason for the (ahem) lack of flavor (this may also be referred to as ‘off flavors’ or ‘crap’) in most cheap beers is the very thing that makes them cheaper to produce and sell for profit: the substitution of inferior ‘filler’ fermentable starches for the fine barley (and sometimes wheat or even rye) of better beers. Your garden variety cheap beer is made using rice and cereals instead of these honest grains.

Sigh. So be it! And you know what? There’s a time and a place, man. These beers fill a niche just like anything else. Even though at the very bottom end, their niche should be reserved for table sports only. In particular, beer pong!

So for your party needs, we’ve put together 5 examples of the best beer for beer pong:

And for number 5, a beer that is on here as much for its name as it is for its price point… good old P.G.D.S.L.! That’s right, Pabst Genuine Draft Style Light! What a mouthful that is (clever, no?).

Now, we all know that despite Pabst’s flagship Blue Ribbon Lager resurgence as a popular beer with the hipster set that it is, at its core, a cheap beer. And this is Pabst’s even cheaper offering, so we understand if you’re a bit nervous about this one.

But if you don’t mind tasting very little at all (it’s kind of like a standard beer mixed evenly with club soda) then you will certainly not mind how cheaply PGDSL is priced.

Keystone Light. It’s pretty good. Not sure I have ever seen a Keystone ‘regular’ but whatever. This beer has all the hallmarks of a standard ‘cheap’ beer without tasting as bad as some (that will remain nameless but may be known as ‘Beast’), in that you can taste the sort of flat starchiness of the fermentable malt products, which are only partly grains, largely ‘filler’. But like I said, it doesn’t taste bad, it’s just barely registered on the ‘good meter’.

But how weak is it? Keystone Light has a 4.13% ABV. A concentration less than standard American lagers. So if you’re not looking to get too smashed, this the best beer for beer pong.

I mean, in 2005 Coors Light was awarded with a silver medal in the ‘Great American Beer Festival in the American-Style Light Lager’ category. So it has to be good right? It was only awarded the medal 13 years ago.

If you want a beer at a ballgame or many a concert venue, or if you want the right can on your knee while you’re camping or playing a few rounds of beach volleyball, this is probably the right beer to have at least a little bit of a taste for.

Yes, it’s booze-water, but it’s our booze-water. And this booze-water deserves a place on the best beer for beer pong list. I do take issue with their whole ‘the coldest tasting beer’ thing because come on…cold doesn’t have a taste, that’s a different sense entirely!

Tecate! Ariba! Yes, Tecate is a cheap Mexican beer. It tastes just like a lot of other cheap beers imported from Mexico. But it does not taste, for lack of a more elegant way to put it, bad. It’s refreshing, it’s got a nice little malty taste with a quickly fading hop presence… it’s beer.

Now here’s the thing: pour yourself a tall glass of Tecate, Corona, and Pacifico (actually, better make it like 6 small glasses of each, so you factor in probability), mix ‘em up and try to parse out the differences. Most folk can’t, so why pay more for a beer just because it’s in a glass bottle, which only serves to let in light and ruin the beer anyway! So if you want to keep your guests guessing on the brand of beer they’re playing with, this is the best beer for beer pong.

Yuengling Lager comes from America’s oldest (continually operating) brewery. The Yuengling boys have been making beer since 1829. Not a bad run. And their flagship lager? It’s a damn fine amber — bready, refreshing, session-ready beer. And in most parts of the northeast and much of the southeast, you can get a 12 pack of bottles or cans for $8.99 and sometimes 24 cases for around $15.

I’ve been enjoying Yuenglings for years and I still don’t get how they produce a beer of the relative quality to cheap ratio they hit, but I am not going to look that gift horse in the mouth. Kudos, D.B. Yuengling and sons. I mean, cheers. That’s what I meant.

For Harry Potter fans, you could try Quidditch Beer Pong. The teams are made up of three players instead of two, who must pass their ping-pong ball through one of the three rings, just like in Quidditch. There’s even a snitch cup. If you shoot for that cup and make it in, the game is over just like when Harry always manages to catch the snitch and win.

For golf fans, have a go at using the best beer for beer pong golf instead. Put 10 cups of beer inside 10 slots inside a sloped board. Players just have to hit golf balls into the cups. A true test of golfing skills as the ability to aim dwindles away the more you drink.

Finally, there’s a beer pong variation called Wormhole Pong. 1 of 7 cups on either side of the table is a predetermined wormhole cup with an obvious different type of beer to the other cups. If a player hits the wormhole cup, teams switch places instead of drinking.