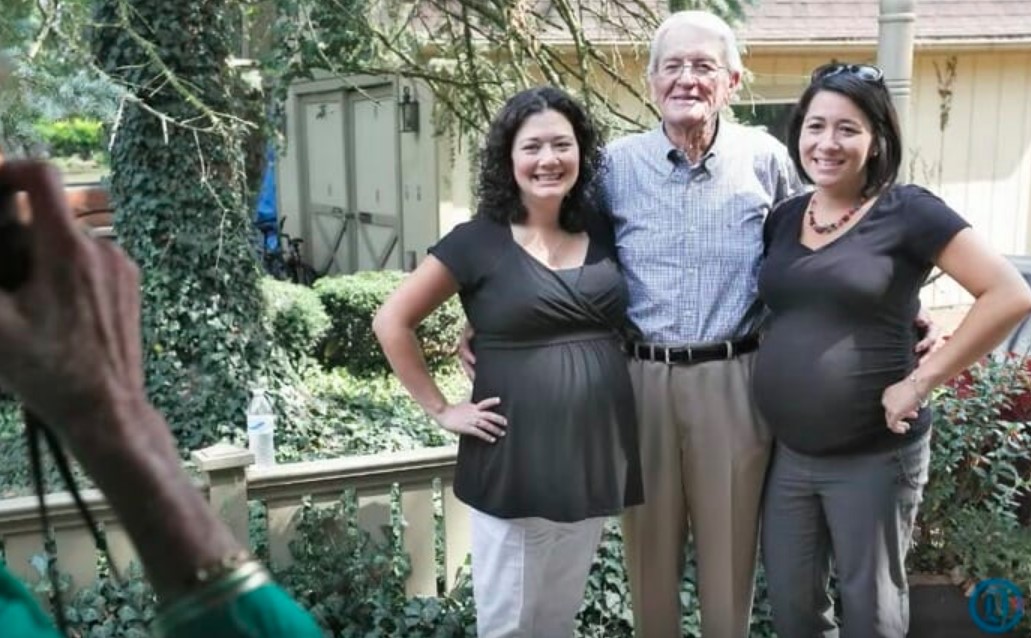 They had waited for this moment for years, and here they were. Her and her sister were both in hospital, getting ready to give birth.

They couldn’t contain their excitement. It was finally happening. They were both about to give birth to twins, on the exact same day! But it was no coincidence, they had planned it this way.

Trying To Start A Family

After the first round of treatment, the couple’s hopes had been high as they waited for the call that would hopefully change their lives forever. And the call did come, but the news wasn’t what they wanted to hear.

Annie and Chrissy had always been close – they were like two peas in a pod. But Annie wasn’t handling the bad news well, so she asked her sister for some help.

Chrissy was by her sister’s side when all the treatments failed. She stayed with Annie throughout the worst period of her life, wiping her tears for her and providing emotional support. But she had a plan up her sleeve.

“In 2008 we tried, in 2009 also; in 2010 was the in-vitro, and on paper, everything looked great, but we got the phone call with the bad news that I was not pregnant after that round, and that was the hardest call ever to receive​” Annie recalls.

So, she decided to give up on her dreams of having a family. If she wasn’t destined to have children, she wouldn’t fight it any longer. But something unexpected was just around the corner.

Annie had been devastated when the final in-vitro treatment failed. Even though she had always wanted children, she just couldn’t seem to conceive.

When her sister came over and she told her the latest round of bad news, Chrissy decided that it was time for her to take matters into her own hands. She decided to approach her sister with an interesting proposition.

“If there was just anything I could do to help, you know, I would do it,​” Chrissy told Annie. And Annie knew that her sister would do anything for her.

Growing up, they’d shared everything together. Still, Annie could not wrap her head around what her sister was suggesting. She couldn’t go through with it… could she?

Although Annie had trouble conceiving, her sister Chrissy had not. She had a family of her own – two sons and a perfect husband.

Motherhood had come so naturally to her and she had given birth twice without any complications. Chrissy knew she was the lucky one. She didn’t think anyone should have to go through infertility – especially not her sister. What was she planning?

Chrissy convinced Annie to give it one more try. The doctor implanted two embryos, but Chrissy knew it would work this time.

By some miracle, the treatment was a success! Not only that, but Chrissy was pregnant too! It was a dream come true for these sisters… and everything seemed like an incredible coincidence. But that wasn’t all.

Chrissy and Annie went for their first ultrasounds together. The doctor was incredulous as he shared the news. “They found one in me and then they moved over and saw another little sac with another flickering heartbeat, and we knew that we still had Chrissy left to go,” Annie recalls.

Sure enough, both sisters were pregnant. And they were both expecting twins!

Chrissy had gone through pregnancy twice before, so she let Annie take the spotlight… after all, Annie had been trying to get pregnant for five years!

But the fact that both sisters had gotten pregnant at the same time and they were both expecting twins wasn’t the only crazy coincidence. Soon, their secret pact would unravel.

One day, Chrissy went into labor. She couldn’t have been more excited to welcome the babies into the world. Tears rolled down Chrissy’s face when she finally got to meet the twins.

Annie, as always, was there by her side throughout the birth. But then, she felt something strange happening. Because the whole day had been so exciting, she chalked it up to nerves, but she was wrong.

As Annie sat by her recovering sister’s side and helped her with her babies, she felt a sharp pain jolt through her body… then another. The searing pain in her hips was nothing like she’d ever experienced before.

“This can’t be happening,” she whispered as she rushed to fetch a doctor. But it was happening.

The doctor checked Annie over and couldn’t believe it. She was in labor too! Annie and Chrissy gave birth to two sets of twins on the very same day, just hours apart. Chrissy delivered two healthy baby boys, and Annie gave birth to two beautiful girls.

Four babies came into the world that day. But when their father came to visit his daughters, he demanded answers.

After Annie’s final round of invitro had failed, Chrissy had an idea. She approached Annie and offered to be her surrogate if she would give it one more try.

At first, Annie was reluctant. She couldn’t put her sister through all that. But after discussing it with Joby, she decided to give it a try.

Chrissy wanted to be a surrogate for her sister. She went to get two of Annie’s embryos implanted, and Annie went along. As luck would have it, Annie was also at the right point in her cycle, so the doctor implanted two of Annie and Joby’s embryos inside her, too.

The sisters didn’t know if Annie’s pregnancy would take, so they decided to keep it hushed until they were sure.

The sisters were so overwhelmed with happiness that they couldn’t keep their tears at bay. “We still can’t believe it sometimes,” Annie said, “We’re very thankful for what she did for us. We’re very grateful and thankful that they’re all here.”

“Trying to get at least one baby, we are just so excited to take all four of them home and they’re all healthy,” Annie told Daily Mail UK.

She had been trying so hard for a baby for so long, and now she was blessed with twins! She still couldn’t believe it. But how had Annie convinced her to try her plan?

“I didn’t know if I could even be a surrogate or care for the baby but I did some research and found out I would be able to do so, and put it out there just as a consideration for the future,” Chrissy explained.

“If it ended up that Annie was not able to carry a baby then that is what was preventing them from having a child then I would do that ​for them.”

When Joby Johnson, Annie’s husband and the dad of all four babies, heard about Chrissy’s offer to be a surrogate, he immediately agreed.

But the fact that all four embryos had taken was something he hadn’t bargained for. The doctor had warned them, but they hadn’t listened.

“I remember saying the day when Dr. Williams told us that we have a possibility of having two twin pregnancies,” Joby recalls.

“We said: ‘We haven’t been able to get pregnant for five years, so if the outcome of this is two twin pregnancies giving us quadruplets, bring it on.’ If the worst problem he can give us was now there would be four babies, we were ready.”

All four babies; Charlie, Tommy, Gracie, and Haddie,​ came into the world healthy as could be.

These little bundles of joy are going to have too much fun growing up, and one day their parents will tell them about the crazy story about sisterly love that started their lives. But in the meantime…

They will enjoy each and every baby every single day. Annie and Joby could not believe their luck when their in vitro cycle came out positive, and just when they had given up!

This family is one in a million, and their story can’t be more incredible. Imagine the chances of all four embryos taking, and the sisters going into labor on the same day!