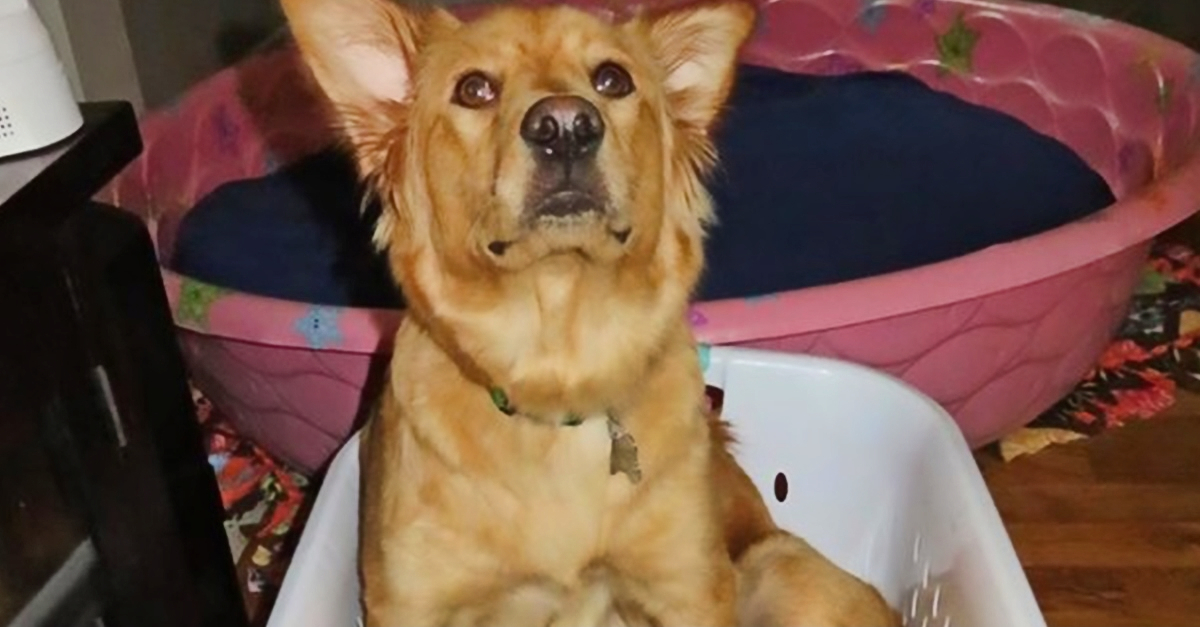 Not What Anyone Was Expecting

In all the years of rescuing dogs, they had never seen anything like it. Rosie had been heavily pregnant when they brought her into their home, but they couldn’t have expected this.

Although the couple had a million questions as the litter began to emerge, there was one thing they were sure of: this dog needed help now.

Rosie, a golden retriever mix, had been callously left at the shelter by her previous owners in 2017. To make matters worse, she was pregnant and about to give birth any day.

The staff at the shelter were worried for her and her puppies because they simply didn’t have the resources to take care of another litter, and no dog should have to give birth alone in an overcrowded shelter. Rosie needed help now more than ever.

Searching For A Loving Home

The manager of the animal shelter knew Rosie would need specialized care, so he contacted Neuse River Golden Retriever Rescue – an organization in North Carolina that specializes in rehabilitating and finding golden retrievers’ foster homes while they wait to be adopted.

Fortunately, one of the organization’s members knew the perfect couple for the job.

The next morning, a volunteer at Neuse River Golden Retriever Rescue collected Rosie from the shelter. But when she saw her, she knew there was a risk of Rosie going into labor before they reached the vet.

Thankfully, Rosie made it to the Raleigh Vet Clinic, where the vet on duty gave her a clean bill of health. Now that they knew Rosie was perfectly healthy, the next step was to find an experienced foster family who could assist her when she gave birth.

Katie and John Black began fostering dogs in 2009. Since then, they have successfully fostered more than 20 dogs. The volunteer knew that the couple had all the experience necessary to ensure that Rosie’s birth went without a hitch.

And so, five days after Rosie was abandoned at the shelter, she was welcomed into the Black’s household. But nobody could have expected the way things would play out.

“This is our new foster, Rosie,” the Blacks introduced her on Instagram, “who is very preggers and close to delivering her puppies.” Rosie was reserved and a bit frightened at first – and who could blame her? Here she was with strangers, about to give birth to a litter of pups.

But when the big day arrived, the Blacks would receive a surprise that would captivate the whole internet.

When Rosie went into labor just a few days later, Kate and John did everything in their power to make her as comfortable as possible.

Although it was a complicated birth, the Blacks knew exactly what to do to ensure that she and her puppies survived. But when the puppies began to appear, Katie couldn’t believe her eyes.

As the couple assisted Rosie, they were completely taken aback by the puppies that were emerging.

But they couldn’t dwell on the pups’ appearance – they had to make sure that Rosie kept her strength up and gave birth to every pup within a reasonable timeframe. Rosie’s belly had been so large that the Blacks anticipated a large litter, but they were in for yet another surprise.

The Blacks made sure that Rosie had given birth to every pup in her belly, but were still surprised when she only delivered four. The Blacks knew that other dogs her size usually gave birth to five or six, but, thankfully, they were all large and healthy.

Now that Rosie had delivered all her puppies, Kate let out a sigh of relief. Then, she wrote the update for her social media followers that whipped the internet into a frenzy.

“Our foster dog, a Golden mix, gave birth yesterday… To baby cows,” Kate wrote, to everyone’s amusement. The four pups had unusual black spots and didn’t look anything like their mom!

Hilariously, the Blacks decided to name the puppies Clarabelle, Betsy, Daisy, and Moo. And the internet couldn’t get enough of Rosie’s “cow” puppies!

It wasn’t long before Kate’s social media account blew up with messages and jokes about the strange, spotted creatures.

“My dad laughed for quite a while at the photos,” Kate told the Press Association. It was clear that the father of the pups wasn’t a golden retriever like Rosie. But then, just what was he?

There are many dog breeds that have white fur and black spots. And social media users loved the mystery as everyone tried to guess what he was.

Some were sure that Rosie had fallen in love with a Dalmation, others suggested the dad had been an English setter. There was no shortage of theories as everyone got in on the guessing game. So, who was right?

While there are many breeds with white fur and black spots, one candidate seems more likely than the rest.

Only dalmatians have true “spots.” Dogs with other markings have what is known as “ticking” – their markings are made up of small, isolated areas of tiny dots. Meanwhile, Rosie’s family photo was spreading like wildfire.

It was Kate’s dad who suggested that Kate post the photos of the puppies on Reddit – he had a feeling that they would go viral, and he was right. Rosie and her babies blew up the internet!

What made the photos even funnier was the fact that Rosie looked just as perplexed by her puppies as everyone else!

More than 90,000 users liked the photo, and 1,600 users commented. And when Kate shared the photo on Instagram, the couple’s popularity skyrocketed.

“I believe there’s been a mixpup here,” one Reddit user wrote. Others commented on Rosie’s comical expression, saying that she looked like she was defending her choices:: “so what?!?! is that really such a big deal? are you sooo closed minded?” Other commenters, however, weren’t so positive.

Of course, as with most viral stories, there were a few haters. Although most people who saw the photos of Rosie’s “cow” pups were positive about the situation, others accused Kate and John of allowing their foster rescue dogs to breed.

In the Blacks defense, Rosie was already pregnant when they took her in. After receiving hateful comments, Katie was careful to specify that they hadn’t allowed Rosie to get pregnant.

Kate clarified that they had received Rosie already pregnant. “We weren’t going to abort her puppies,” she commented. “She will be spayed immediately when she can be.”

It’s unfortunate that Rosie had gotten pregnant in the first place. While Kate and John didn’t want her litter to contribute to the number of unwanted dogs in the world, they had to do the best they could for them. Meanwhile, Rosie’s recovery wasn’t going as planned.

Although the birth was successful, Rosie’s health began to decline. After she delivered her litter, the Blacks realized that she had an infection.

Rosie suffered from Metritis – a bacterial infection in her uterus – caused by having a difficult birth. The vet prescribed antibiotics for several weeks while the Blacks looked after the pups.

Fortunately, Rosie’s infection cleared up and she could finally feed her puppies herself. In no time, she had returned to health settled right in – happy to be a mom and care for her puppies.

Rosie was a good mother, too. She was protective of her pups, following them around wherever they went. As the pups grew up, they stopped resembling cows.

In two weeks, the puppies had opened their eyes, and Kate and John were falling more in love with them by the second. Soon, they were tearing around the garden on their shaky little legs.

Rosie appeared content to be a lovingly devoted mother to her babies. Soon, requests to adopt them came flooding into the rescue center.

Rosie was an exceptional mom to all her pups. She loved licking them from head to toe and nursing them.

Kate and John looked on with devotion, this mama had been through so much and now she could breathe easy as she was in complete safety. But still, all the pups needed to find homes!

Although the couple was extremely attached to all the puppies, they decided not to keep any, of them.

One by one, when they were 10 weeks old, they were taken by their new families to their new homes, where they continue to thrive. But what about their mother, Rosie?

Rosie has found her forever home, too. Soon after, a man read about Rosie’s incredible tale on Facebook, and he couldn’t wait to meet her. He fell in love with her immediately and took her into his home.

She has a happy life ahead of her now and has been sterilized to ensure that she never has to go through an ordeal like that again.

All of the baby “cows” have been adopted by loving families who will protect them and love them every single day. And Rosie?

She did too, but she didn’t leave to be with her new family until every last one of her pups had been adopted — seeing them off like the good mother that she is. if it wasn’t for amazing people like the Blacks, Rosie’s story would have been a lot worse.

Rosie’s tale is just one of many, and thanks to a dedicated shelter and a couple’s love for the breed, she is sure to have a life of happiness.