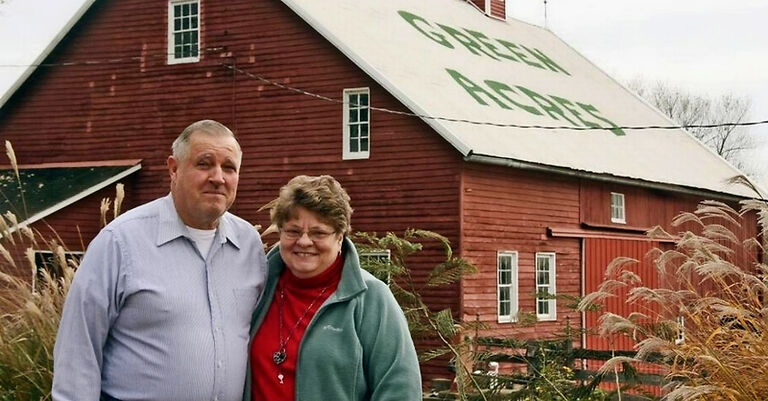 Even if someone has never stepped foot on a farm, they will still be able to point out a very interesting commonality that stretches across every corner of the US.

It’s not the animals or crops – which can differ greatly. Rather, it’s the red color of the hold barns. But why are they that particular hue? Are all the farms in on some big secret? The answer it turns out is surprising…

There have been many theories about the background of this practice.

One example is that years ago, immigrant farmers from Scandinavian wanted to mimic the look of brick and therefore financial prosperity. But that has been long-debunked. The reason is two-fold. One reason lies in the earth. The other lies in the stars.

Used To Be Plain

And aside from keeping animals or storing things, they had another important use. When close-knit villagers were more common than big city living (or services for that matter), local barns were often used for community gatherings.

Meetings, weddings, or parties were often held in barns free of charge (rather than the exorbitant costs for getting a “rustic” venue we deal with now).

Since these buildings were essential, it was important for them to stand the test of time. Here’s where the first “red” reason comes into play.

Wood, nails, and other materials were often expensive – at least to build a huge barn. So, the owners wanted to keep the wood in as good a condition as long as possible.

Some would use linseed oil (which comes from flax seeds). This was readily available and super cheap. All they had to do was mix it with pigments. But more often than not, they weren’t the iconic Venetian Red.

If that sounds familiar, you’ve been lucky enough to remember your periodic table. The compound is rust (from Fe 26 55.847, which is iron). This stuff was everywhere and so easy to mix in. But the reasons don’t end there.

A Sort If Sealant

The mixture (and color) would easily penetrate the wood and keep it from fading or rotting for years, even decades.

Also, the rust mixture would stop fungus and molds from growing on the wood as well – which was an extra bonus. The sealant and color would bring in sunlight, keep out the cold and keep the insides much warmer (which was important for the animals). But what about the “star” part mentioned earlier?

Iron is everywhere – one of the most plentiful elements in the world.

In the time that Sears catered to farmers, they would sell red paint at half the price of any other hue – because it was cheap for them to make it as well. Rewinding hundreds of years before that, the color was widely known in one famous city – which you can guess from the name of the color itself.

There were endless sources of natural clays found near Venice, Italy. The clays contained an iron oxide compound that produced this red color.

But what does this have to do with stars? Well, let’s rewind even further when the Earth was still forming. And let’s couple this with dying stars.

When a star dies (aka. Gets smaller) the pressure builds around it. It puts out an element with just one proton and neutron in the nucleus.

As it shrinks, the law “actions plus equal reactions” must come into play. It slowly builds up to two protons and neutrons. Eventually, it will hit a temperature that a new reaction can occur.

The burst of new energy allows the celestial event to make another, heavier element. And, interestingly enough, the elements that come out follow the order of the periodic table. So cool! (Or hot, if we want to get scientific).

Eventually, the dying star reaches its limit, and we don’t get anymore energy. We just get a huge amount of “stuff” being put out – like iron.

After that, the star’s collapse continues without any new explosions or new elements.

It then dies in a bogglingly large nuclear explosion that will outshine anything in its galaxy. All this matter that has been created gets flung across the universe. Now, imagine an unimaginable number of stars doing this every moment through the history of creation. So, you’ve probably made the connection by now.

It’s easy to think of our world and everything in it being apart from the darkness. We find materials, make them into useful things, and then throw them away.

But, as corny as it sounds, everything around us comes from the universe. The swirls of earth’s creation and the elements that were flung through the emptiness landed on our forming crust.

Iron is plentiful because it’s one of the last things a dying star makes.

Farmer’s back then, and even the Venetians long ago, obviously didn’t know that the materials they were mixing into painting were part of a much larger picture.

It might be a weird stretch to some people – connecting the color red and barns to the cosmos. However, it can be quite a beautiful thought as well.

There was no secret between farmers to make a well-recognized building icon. The universe sort of decided for them.