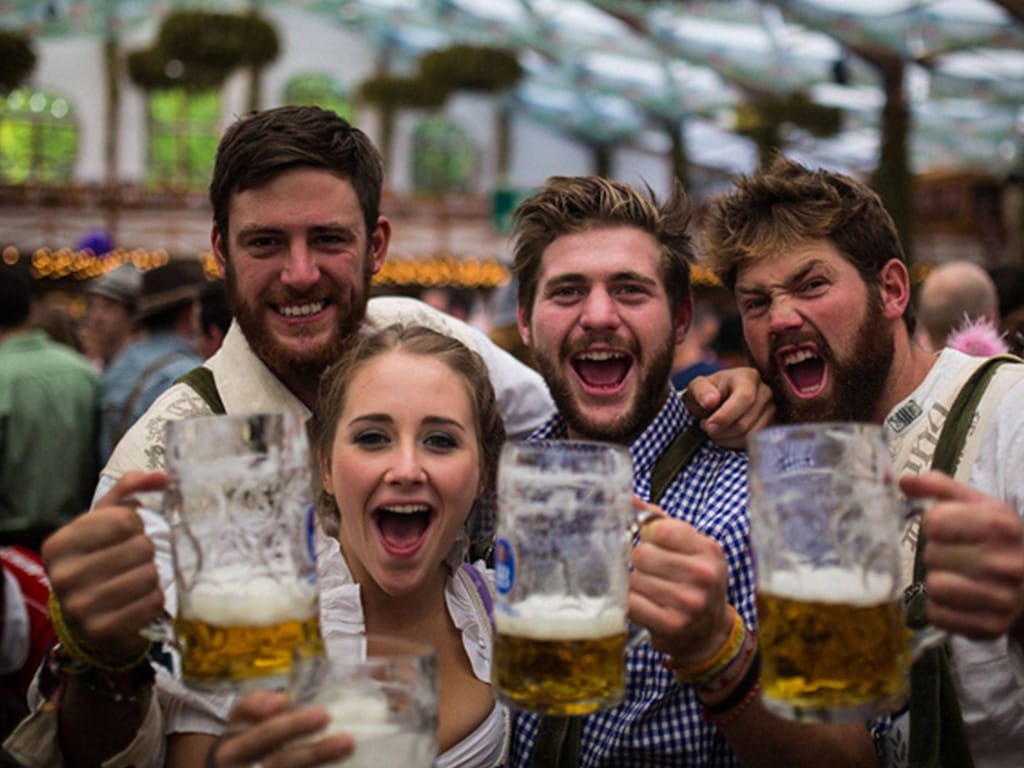 If you enjoy going to happy hour, taking advantage of open bars and always up for a nightcap, then it’s pretty likely that pub crawls are also up your alley. But wait, what is a pub crawl exactly? A pub or bar crawl is, according to Project DC Events, “a drinking session that moves from one licensed premises to the next, and so on.”

Unlike a typical day or night of marathon drinking, pub crawls tend to move from place to place. But even though it might seem like hordes of people drunkenly running through bar-lined streets haphazardly, there is more structure to them than that. There is usually a designated route. This could be created by the group, or you can join an official pub crawl tour that will let you just go with the flow. Also, groups tend to wear matching clothing or dress according to a theme. And finally, it’s expected that each stop on these pub crawls requires every participant to grab a drink. Whether or not you actually finish the drink is really up to you. But make sure to keep things safe and pace yourself accordingly. No one wants to wake up with a massive hangover (though it’s likely) or get hurt in any way.

So now that you know the basics about pub crawls, let’s get into the more important part – where to actually find them.Read more about some of the world’s best pub crawls below.

Glasgow, Scotland, has its fair share of pubs and bars. However, considering how spread out things can get in the Scottish city, you might need a little guidance in order to find your next pint of beer. App developer Robin Wilkie has helped locals and tourists alike with a new app that tells you exactly where a bar or pub is relative to subway stops. Glasgow Subcrawl shows you where the watering holes are and how to get there.

The app isn’t only nifty, but it has also sparked groups to turn into a pretty popular pub crawl, especially for college freshman. Aside from where the pubs are and the closest subway stop to get there, the app also gives users train times as well as how much you might spend at the drinking spots.

If you can’t make it over to Munich in the autumn for Oktoberfest, that’s OK. You and your friends can still indulge in the same lush merriment by taking part in Pub Crawl Munich.For 20 euros, you’ll go to two bars and two clubs as well as get free entry into other establishments in the area. And the ticket price also includes a commemorative T-shirt and three drinks that include whiskey and cola, Heineken and even Sekt, a German sparkling wine. The crawl starts at 9 pm, which gives you and your friends lots of time to party into the wee hours of the morning.

Known as the “Godfather of all pub crawls in Prague,” the Drunken Monkey Pub Crawl will surely get you and your friends nice and tipsy. There are two tours that take place on every nightof the year. So you can even spend part of your holiday vacation on one of these drinking trips.

For a little under $27.50, you will be able to get VIP entry into three different pubs or clubs as well as two hours of unlimited beer, wine, vodka shooters, rum and absinthe. And if you’re feeling competitive or want to take a break from dancing, you can also take part in the many drinking games including beer pong, flip cup and giant drunken Jenga!

Are you a fan of The Walking Dead? Or just have a big fascination with the undead? Then perhaps you may want to fly over to the Twin Cities in Minnesota and join the Zombie Pub Crawl.

For over 10 years, thousands of local and out-of-town “zombies” have been gathering in Minneapolis to drink their faces off (some literally) and party it up. The event has broken the Guinness Book of World Records for being the “World’s Largest Gathering of Zombies.” It’s so big that there are two stages with performances, a costume contest and dozens of local bars and pubs that participate every year.

If you’re in Buenos Aires and looking to meet new people and have a great time, then you should reserve your spot in the Buenos Aires Pub Crawl. Deemed one of the most popular pub crawls in the world, this one will definitely break you out of your shell.

The tours happen seven days a week and throughout the year. The tickets also include free wine, beer, pizza and shots as well as discounts for mixed drinks. You will also not have to worry about admission to some of the great hotspots the Argentinian city has to offer.

One of the most well known pub crawls in England, the Otley Run has been going on for years. Starting with the Woodies Ale House in Headingly, the 16-stop route will take you through most of the city of Leeds. It is a rite of passage for students and usually starts at 3 pm. You’ll know when it’s taking place when you see big groups of people in matching costumes run throughout the streets.

There are 16 bars to visit, and if you’re a stickler for local brews, then this pub crawl is for you. Each stop on the drinking journey to Otley will likely have a couple of beers that are locally made

If you love board games, then the Monopoly Pub Crawl will definitely be your speed. Using the British version of the game, “players” visit 26 different bars on the 26 different streets that are featured on the board.

While the idea is to grab a drink at each place you visit, the creators of this trip encourage you to pace yourself and also consume what you can. There’s nothing wrong with opting for a half-pint instead of the full one on pub crawls like this.

SantaCon is probably one of the more well known pub crawls around. The international bar crawl takes place in about 32 countries around the world. So all the guys on your block in red suits who have beers in their hands are likely taking part in the holiday event.

Every city has a different route that tendsto change yearly. So be sure to visit the event’s website to find out more information.

Who says Disney World is only for kids? Absolutely no one. However if you’re tired of riding the Dumbo ride or taking the 100th photo in front of the Magic Kingdom, then you may want to head over to Epcot Center and drink your way around the world.

With 11 pavilions that represent different countries, you will be able to eat and drink toyour heart’s content and also feel like you just took a trip around the globe.

If you happen to be in Australia in the spring, you might want to stop by Maryborough for its annual World’s Greatest Pub Fest. Since it’s the Guiness World Record holder for largest pub crawl, it is full of various parties, activities and, of course, beer.

You and your friends can plan out the group’s costume, grab one of the Pub Fest passports and have a great time!

Are you inspired to join one of these epic pub crawls? Tell us which ones tickled your fancy the most in the comments!