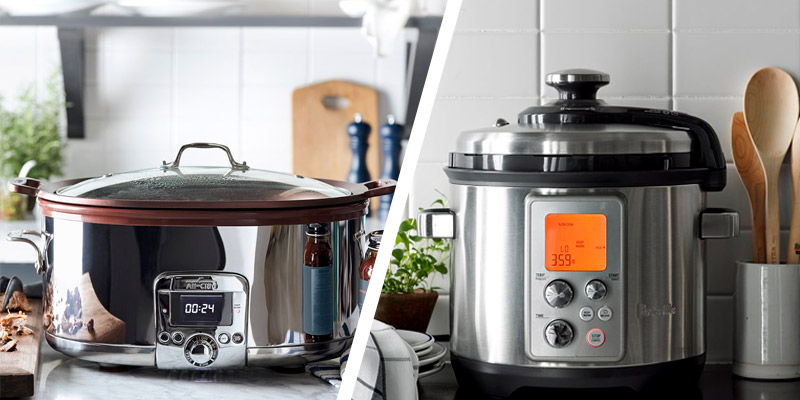 If you’re a fan of convenient, hands-free cooking, you’re probably considering purchasing a pressure cooker or a slow cooker. These low maintenance kitchen appliances make it easy to cook healthy, delicious meals at home. But while these two different appliances often look similar on the outside, and even produce meals results — think mouthwatering roasts, soups, braises and more — they’re different when it comes to how they operate. Which is better in the pressure cooker vs. slow cooker debate?

These two home appliances can cause a lot of confusion for people. Each one has pros and cons. A pressure cooker is speedy and a slow cooker, as the name suggests, is slow. They both produce flavorful meals with minimal prep and virtually no hands-on cooking is involved.

To help you decide which cooking appliance better fits your lifestyle, let’s take a close look at pressure cookers vs. slow cookers.

An Overview of the Pressure Cooker 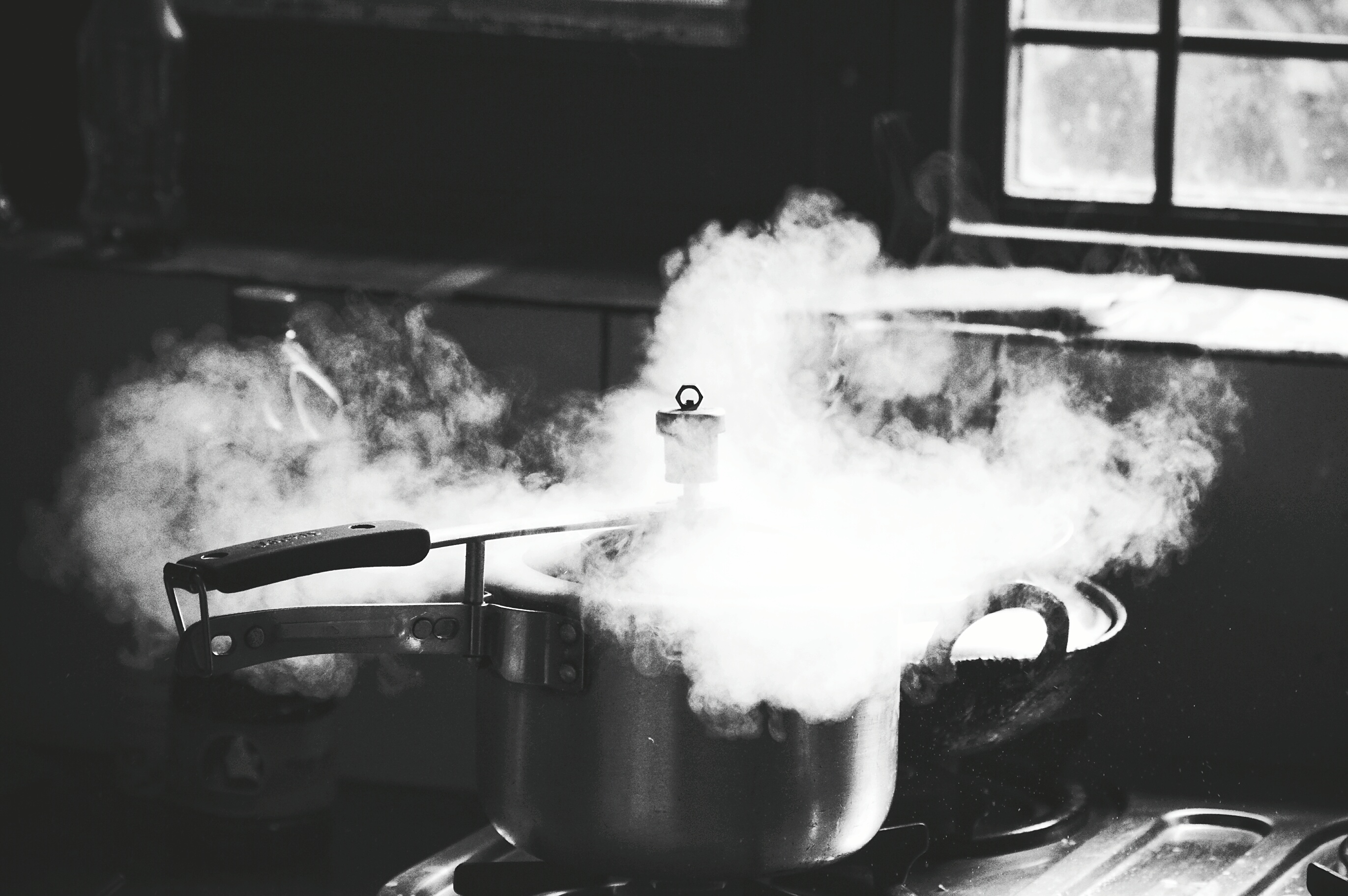 A pressure cooker is a convenient cooking appliance that can help you make a variety of meals without planning ahead.

While a slow cooker requires you to start your meal a few hours before you plan on eating it, a pressure cooker allows you to wing it as long as you have the ingredients you need on hand. With a pressure cooker vs. slow cooker, you can decide to make a roast at 5 pm and have it ready within an hour.

Pressure cookers can also be healthier to use than both slow cookers and conventional stovetop cooking methods. Why? Pressure cooked food doesn’t lose as many heat sensitive vitamins or minerals. A lot of liquid dissolves during high-temperature cooking and when foods are boiled down. The minerals and vitamins also dissolve with the liquid.

How a Pressure Cooker Works

A pressure cooker is a pot with a tight locking lid and a valve that controls the steam pressure inside. As the pot heats up, the sealed lid traps steam inside, which raises the boiling point from 212 F to 250 F. This higher temperature helps your food cook faster. It also forces more liquid into the food, which is why meats can get tender even with shorter cook times.

The high heat from pressure cooking causes more browning on meats and caramelization on vegetables. If you like to cook, you know how important good caramelization is for flavor.

If you think pressure cooking sounds a lot like steaming, you’d be right technically, but the flavor this cooking method produces isn’t the same. Because of a pressure cooker’s ability to caramelize ingredients, even when liquid is added, the flavor is much fuller than anything you could get with traditional steaming methods. 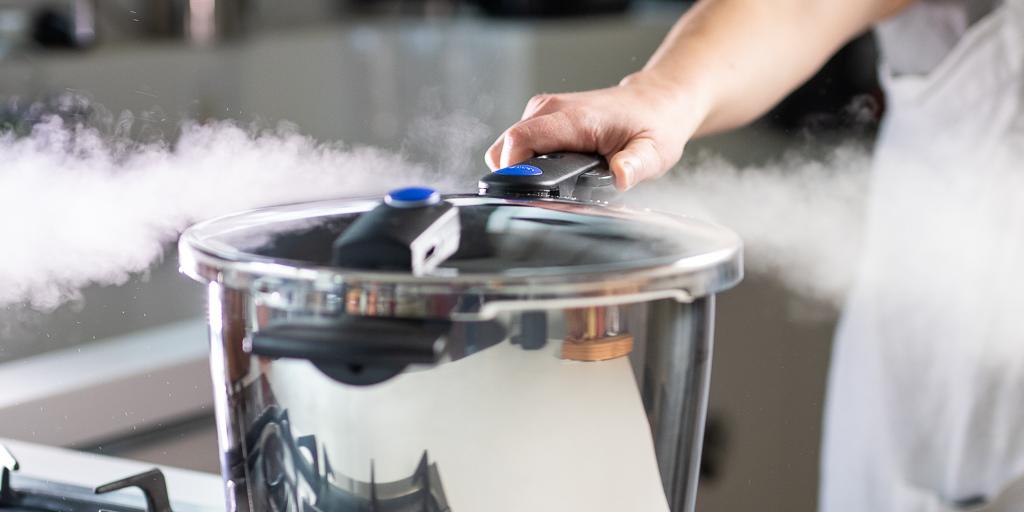 A stovetop pressure cooker looks similar to a traditional stove top pot. The difference is that this cooking pot comes with an attached lid that seals tightly to trap steam and a valve on the side to adjust the pressure of the steam inside. 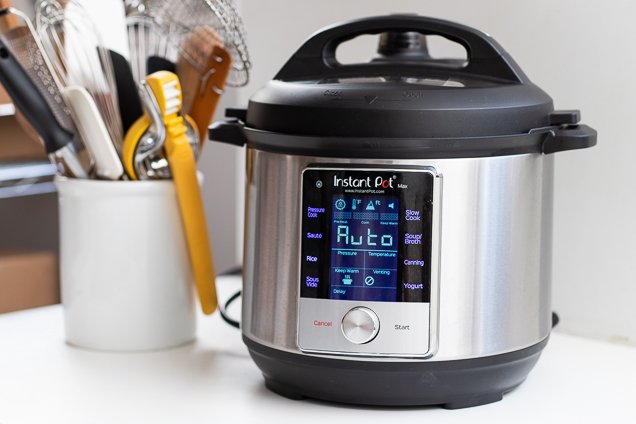 An electric pressure cooker looks similar to a slow cooker, but the width is much smaller. These models plug into an outlet and have touch screen panel controls that help you to set it and forget it.

An Overview of the Slow Cooker 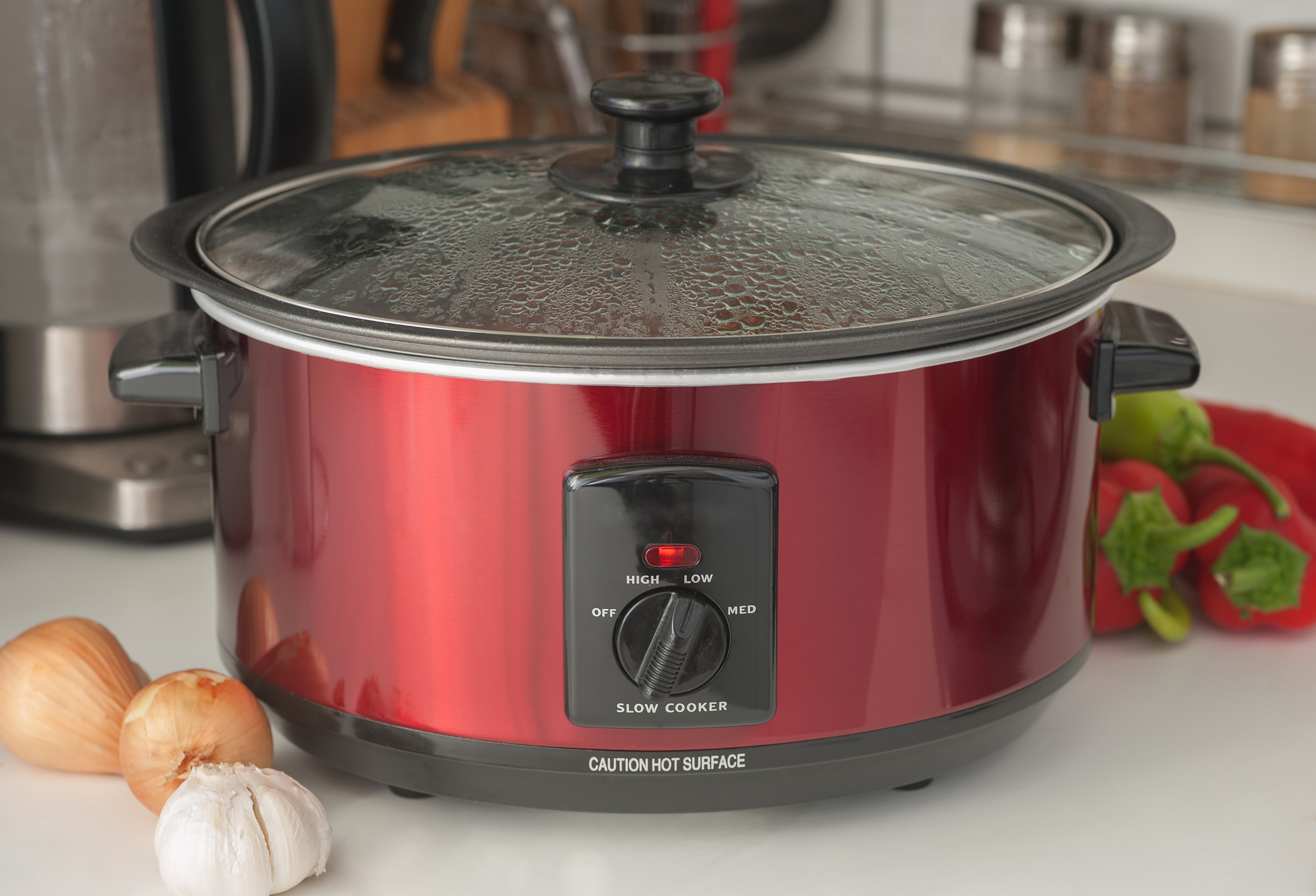 Slow cookers have been around for a long time. They’re one of the most popular kitchen appliances in the United States for a good reason. A slow cooker might not cook as fast as a pressure cooker, but it can be more convenient if you work long hours.

With this helpful appliance, you can add your ingredients in the morning and come home to a delicious meal that’s ready to serve eight hours later. Some models will even automatically switch to warm mode once the programmed cook time is up. Because slow cookers are so popular, you can also find more slow cooker recipes and cookbooks.

While a pressure cooker might retain more vitamin and minerals, slow cookers are also capable of making healthy meals. You can make indulgent recipes like pot roasts and mac n cheese or healthier recipes like soups and baked beans. Slow cookers can be incredibly versatile.

How a Slow Cooker Works

Slow cookers work similarly to Dutch ovens, but they eliminate the risk of starting a fire while slow cooking on the stove for hours. A dutch oven is heated on the stovetop from the bottom up. A slow cooker is plugged in and spreads heat evenly over the entire base of the inner ceramic pot.

A slow cooker has three main settings: high, low, and warm. Roasts and other large pieces of meat are best cooked on low for about eight hours. Cooking tougher meats at low temperatures, over a long time helps them turn out more tender. Beans, dips, and sauces are best cooked on high and usually take no more than 4-6 hours to finish.

Programmable slow cookers will let you pick your cook setting and enter the amount of time you want to cook for. Once the cook time is done, the slow cooker will automatically switch over to warm mode for you. Other manual models require you to monitor your own cook time. You’ll also have to switch to warm mode by turning a knob yourself. 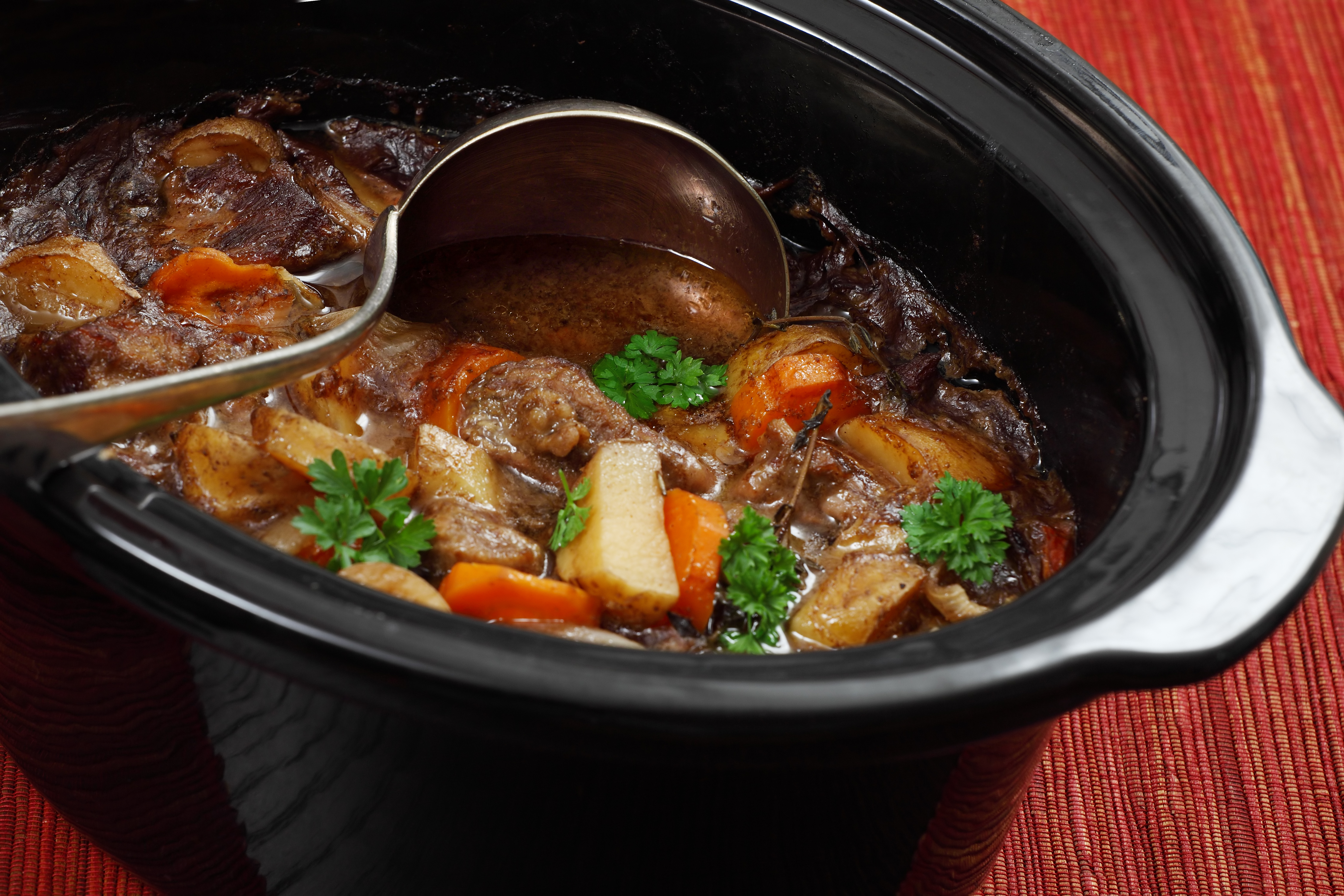 The ability to cook meals faster is helpful for anyone who hates having to plan meals ahead of time, but a slow cooker is more convenient if you prefer coming home to a finished meal. If you have the storage space, owning both a slow cooker and a pressure cooker is the best option. You’ll be able to cook low and slow, or with impressive, high-pressure speed.

Have you decided between a pressure cooker vs. slow cooker? If you’ve picked slow cookers, read our guide to the best slow cookers by clicking next. 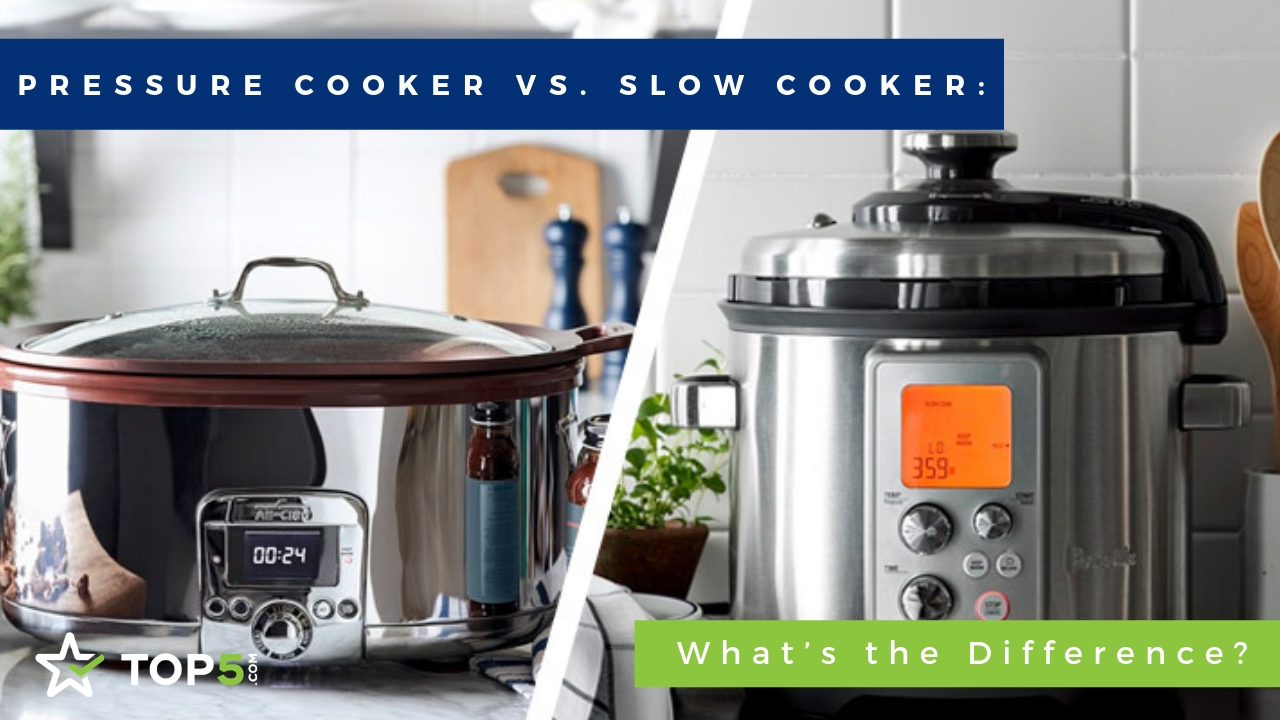 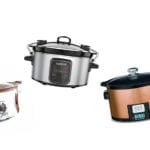 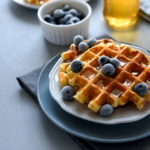 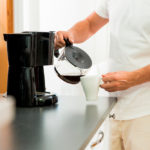 How to Clean a Coffee Machine 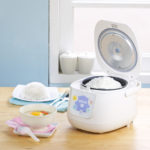 How to Cook Different Types of Rice in a Rice Cooker 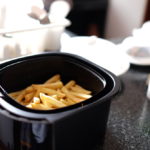 How to Clean an Air Fryer in 5 Easy Steps 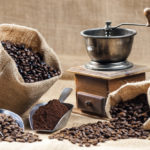 Top 5 Tips to Grind Coffee Beans Like a Pro

Top 5 Tips for Making Crispy and Golden Waffles
How to Clean a Coffee Machine
How to Cook Different Types of Rice in a Rice Cooker
How to Clean an Air Fryer in 5 Easy Steps
Top 5 Tips to Grind Coffee Beans Like a Pro
Top 5 Mistakes to Avoid When Using Air Fryers
Top 5 Slow Cooker Healthy Recipes
Air Purifier vs. Dehumidifier: Which One Do You Need?