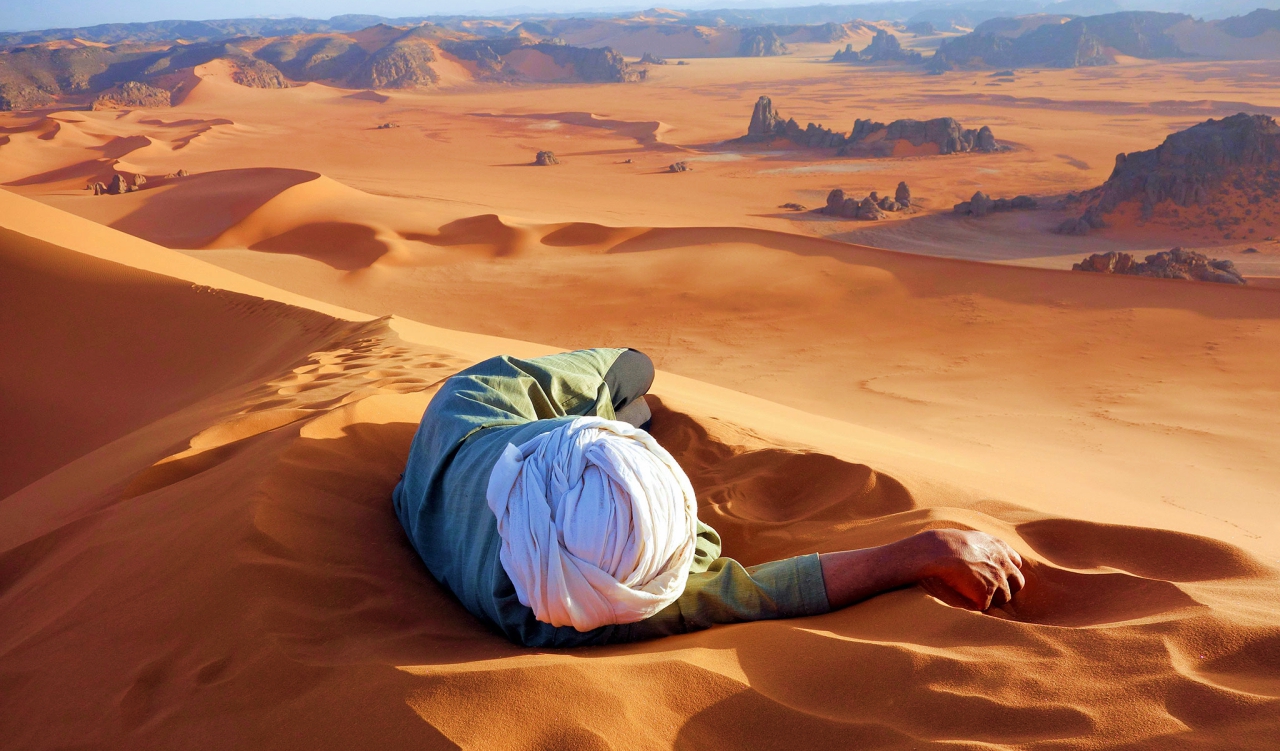 Regardless of where we live, we always seem to be able to find a reason to complain about some aspect of the weather. We feel like we’re living in one of the most extreme places on the planet when it’s a little hot or a little cold out.

The summers in the Pacific Northwest are great, but the winters are so gray and drizzly! You can’t beat springtime in the South, but the summer is brutal! New England has the best autumns in the world, but the winters there are so cold!

Listen up. If a muggy summer or a few gray winter days are your biggest seasonal disappointment, you’ve got nothing these people you’re about to see. They live in the most extreme places on Earth that will make your small complaints seem like nothing at all.

Here are 15 of the most extreme places people call home.

Any place called Death Valley sure doesn’t sound like a place most of us want to live.

It makes sense that this is one of the most extreme places on the planet. It can reach temperatures as hot as 130+ here in the summer. However, most summers don’t see it get this hot all the time. You’ll often see temps reach the 110s, however.

Funny enough, it can get relatively cold here in the winter. However, Death Valley was nicknamed the hottest place on Earth during the gold rush of the mid-1800s. The narrowness of the valley itself prevents any circulation of air.

Before the gold rush, Native Americans lived in the valley for around 1,000 years.

Grise Fiord in Canada happens to be the coldest inhabited village on the planet. The people here speak the Inuktitut language, which is spoken by all of those in the Canadian Arctic.

The village in the area is known as Aujuittuq, which in English means “the place that never thaws.” It gets so cold here that the average temperature is considered “unsafe work conditions” by the United States government. The village is 40 degrees colder than their normal temp that they allow non-emergency work. This means it can be -70 and below.

Canada forced the Inuits to live in this area years ago. The government has since apologized.

The people of Bajau Laut out of Southeast Asia willingly put themselves in some of the most extreme places on Earth.

These people live out on the open water. They often can be seen in the waters of the Sula Sea, which off of the southeastern coast of the Philippines. They’re usually in boats or small homes built on the sea. Some of these people have never once set foot on dry land!

The only time they do tends to be when they bury a dead member of their crew or when their civilization becomes too large and they have to make a new boat or sea home to house the expansion.

Because they are on the water so much, they have suffered from land sickness rather than what we consider seasickness.

The people of Kandovan, Iran, live in one of the most extreme places on Earth. They live in hollowed out house-caves. They look like termite houses or massive anthills, to be honest. Some of these homes are around 700 years old, so at least we know they were built well.

The people began living here centuries ago when they were fleeing the Mongolian Empire. The conditions here can be rough at times, but they have some amenities there today. They have working electricity and internet access. Neither are amazing, but hey, they live in a cave!

The Atacama Desert in Chile happens to have the lovely distinction of being the driest place on Earth, which also makes it one of the most extreme places on Earth too. They barely have water here at all, and what they do have comes from an underground aquifer.

The problem here is that water comes from underground, gets hot, then bubbles up in natural arsenic. Therefore, the water is toxic to drink even when attempts to filter it are present.

The sad part is that the Atacama Desert is not hot year-round. Cold ocean currents and high mountain winds are present as well, which ensures a lack of rain. This makes it scientifically impossible for clouds to form at all.

Tristan da Cunha is one of the most extreme places on Earth simply due to being in the most remote, inhabited island in the world today.

The people here live on an island that is 1,750 miles away from South Africa. They have been living here for centuries but were only discovered in 1506 when the Portuguese came in contact with the people here. However, the place did not become a recognized permanent settlement until the early 1800s.

Due to the people liking the land being to themselves, any immigration is prohibited. However, they don’t mind visitors.

The land also cannot be bought. This is mainly a farming civilization, with a lobster factory. They also make their own postage stamps and coins. Around 80 families live here, but there are only eight surnames. You figure out how they continue to populate the island.

La Rinconada in Peru has the cool achievement of being the highest human settlement on Earth. This does come with issues, making it one of the most extreme places to live on the planet. A little over 30,000 people live here at an altitude of 16,700 feet, and they have half of the Earth’s atmosphere between them.

The town is built around a gold mine, making it a place gold miners loved. An interesting bit of trivia is that the gold here is thriving and doubled from 2000 to 2014.

The people don’t pay the miners for 30 days while they live and work there. On the 31st day of work, any ore that they can carry out is 100% theirs. It’s too big of an offer for these miners to pass up.

One would assume that living in the country of Italy has to be awesome, right? For the most part, the people of Città di Castello are in a pretty fantastic place.

However, this is not a reality every day of the year. The small village is home to about 150 people. They live around 1452 meters above sea level, but this does not make them one of the most extreme places to live.

They are the highest populated settlement in the Apennine Peninsula, which is the real issue. Rainwater runoff from the mountains behind their village creates problems for them. Usually, the water runs into natural cavities that block it from going anywhere. When it doesn’t, the entire settlement is flooded and turns into what can only be described as a large lake.

Kibbutz Ein Gedi is incredibly low, so much so, they are the lowest human population on the planet. They live 400 meters below sea level, with the closest sea to them being the Dead Sea.

The reason people live here in one of the most extreme places on the planet is unknown. They’re as close to the center of the Earth as you can physically get without burrowing underground.

The current settlement of Ein Gedi realized things could be better, so they decided to help change things in the 1940s. This worked out well, as they now have a botanical garden and a massively thriving agricultural area. It is practically one big farm out in this old desert of sorts. It’s surprising so much can live with the Dead Sea right down the road.

Currently, 200 people live in the town of Aogashima, Japan. Overall, Japan can be a tough place to live due to the severe storms, typhoons, hurricanes, and much more that come through the territory. They have been hammered for years by these storms, but they have adjusted well. However, the people of Aogashima wanted to take their living arrangements to the extreme.

They live inside a volcano, mostly due to the fertile land there. Of course, this volcano is not active. The last time it erupted was at the tail end of the 18th Century.

Still, living in a place like this puts it on the most extreme places list to us.

The steppe is a term used to describe an area of wide, open land —mostly flat — that receives too little rain for real forests to grow but gets more rainfall than a desert. Thus, as you can imagine, life on the steppe is consistently pretty tough stuff. Steppe covers much of Russia, Central Asia, and swaths of North America.

Plains Indians called the steppe their home in centuries past, and right up to this day nomadic herders still range back and forth across the Eurasian steppe. It isn’t the desert, but it’s not exactly Boca Raton, either.

The reason people climb Mt. Everest is because it is a huge challenge. Even getting to the foot of the world’s tallest mountain is a feat in and of itself.

The base of Mt. Everest is nearly 14,000 feet high up in the Himalayas. Nevertheless, the Sherpa people have for hundreds of years spent their lives at elevations higher than most of us will experience in our lifetimes, not counting air travel.

These people are the guides you’ll meet at Everest. They have made the mountain a bit easier to travel for the average person. However, being a guide at Mt. Everest is considered the most dangerous job in the world. This is likely due to the several deaths that the Sherpa people have had in the last dozen years.

The Amazon Rainforest is a great place to get killed by panthers, caimans, or poisonous frogs, and snakes. Also, it can be as hot as hell and wet.

Yet for more than 10,000 years, people have lived in the world’s largest forest. The Amazon Rainforest is one of the most extreme places on the planet, so we’re not sure how they do it.

The Amazon Rainforest is believed to be the last place where “uncontacted” humans exist. Google Earth uncovered a then-unknown civilization of natives that were unknown to the world for a long time. Experts think that the tribes who live there are hundreds of years old.

The Sahara Desert is no place most of us would ever dream of calling home. Most of us would likely die within a day or two of being lost there. Less than an inch of rain falls in any given year in most of the Sahara. Yet, multiple groups of humans have called the world’s largest desert (largest hot desert technically) for tens of thousands of years.

Today Berbers, Arabs, and other peoples keep alive the ancient traditions of the nomadic herders who came before them. The Sahara Desert is one of the most extreme places to ever be, so we’re not sure how the people can live here comfortably.

Across the northernmost swaths of Russia, Greenland, and North America, a small, hearty group of human beings have made their home in the icy Arctic for centuries. This is a region where the simple act of standing around outside will leave you dead in minutes when the temperature drops low enough, which it does all the time.

This is a place where there is no sunshine for months, followed by months of endless sunlight. There is almost nothing to eat that you don’t first have to hunt and kill. This is the Arctic, which is not one of the most extreme places on Earth. It is THE most extreme place to be.

Want to learn about more extreme situations? Click next to read about the worst traffic jams ever.