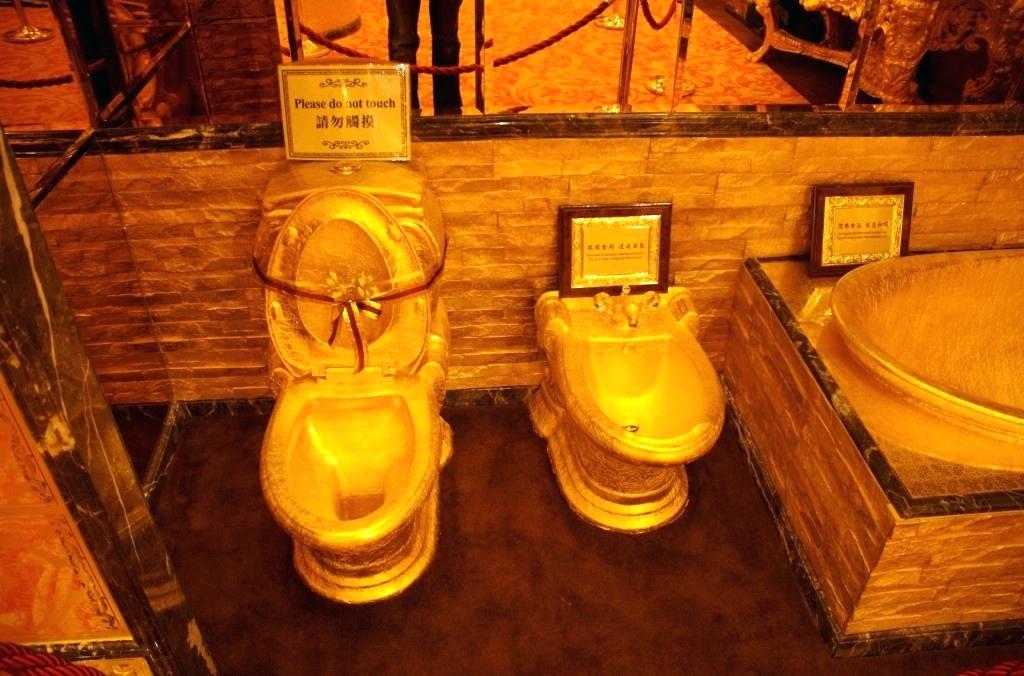 OK, let’s get the juvenile jokes out of the way, people. We’re dealing with some serious toilet humor today, and they demand to be treated as the #1 object of your focus: They won’t take your #2. (We’re sorry, we had to.)

Now that the unpleasantness is out of the way, we can strike a more mature tone as we discuss some of the most innovative, ostentatious and downright interesting bathroom fixtures the world has ever seen! We guarantee you’ll be dazzled by at least one, if not all, of these entries. Why, if the list we’ve put together for you today were a poker hand, it would be a straight flush.

Here are 10 of the most hilarious, craziest commodes that will definitely spark your toilet humor:

Men’s urinals have never been particularly interesting. Most public toilets choose a similar design and color, and this leads to nearly all urinals looking the same. That’s why the men’s WC in the 25H Hotel in Frankfurt is so refreshing. The toilets not only house bright red urinals, but they’re even in the shape of mouths! It certainly adds some character to the bathroom, but whether you feel comfortable with it is totally your choice.

How would you feel having a woman looking at you while you take a piss? This toilet would leave your toilet humor shaken but not stirred.

If you suffer from a shy bladder, then these urinals in the Sofitel Hotel in Queenstown, New Zealand, might not be for you. Each urinal has a picture of a lady standing over it while looking mightily impressed by what’s in front of her. We’re guessing the toilets were designed to boost the users’ confidence and make them proud of their manhood, no matter what the size. Either that or they’re supposed to make you feel very intimidated!

This toilet is not for the faint-hearted. If you’ve ever fantasized about taking a dump at the top of a ski jump, this Japanese ski resort has got the toilet just for you.

The walls of the toilet make the user feel like they are looking directly down a ski jump, and the floor even has real-life skis to strap into; now that’s dedication to the cause!

If you’re bored of always staring at the same old tiled floors while you’re on the toilet, then this bathroom in Mexico should freshen things up.

The WC can be found at the top of a 15-floor lift, with the lucky user actually being able to see straight through the glass floor and down the gaping lift-shaft beneath their feet.

This could be the perfect cure for anybody suffering from constipation!

The rhythm you will make when using this toilet is sure to satisfy your toilet humor to no end.

In terms of originality in a public toilet, you have to take your hat off to whoever came up with the idea for these urinals. The musical toilets can be found in a Freiburg restaurant in Germany and use tubas as replacement urinals. While the idea is superb, we’re guessing the owner must have a bit of trouble trying to keep the instruments clean and shiny. These are three tubas you definitely wouldn’t want to find in a second-hand shop!

5.) Amazingly, This is Not One of a Kind

Some 72,000 miniature Swarovski crystals bedazzle this toilet by the Japanese design firm Lixil.

The commode cost around $130,000, and perhaps more amazing than the fact that anyone made this toilet at all is the fact that it was not designed to be a one-of-a-kind item, but rather a regular offering.

4.) Getting Back to Nature

If you ever find yourself in northern Laos, you might be able to satisfy some childhood dreams of living in a tree house. Several hotels and retreats there feature arboreal accommodations, and beyond the fun of sleeping in a tree, you also get to (meaning have to) manage bodily functions up there.

Fortunately, most of these locations feature full bathrooms with modern amenities, the slight twist being that you are hundreds of feet off the ground and often taking care of business on open-air balconies.

If you have ever dreamed of casually going to the bathroom in the middle of a crowded city street, Italian-British artist Monica Bonvicini has answered your call! She created an artwork consisting of a toilet and sink encased by walls made of one-way mirrors.

The user can see out into the world as if surrounded only by glass, while the passerby sees only a large reflective cube and remains blissfully unaware of what’s going on mere inches away.

This is a cautionary tale: If you build a veritable palace out of gold in Hong Kong and then a worldwide recession hits largely due to the artificially inflated American housing market, the golden toilet will be among the first things to go. At least that’s what happened to the people of the Hang Fung jewelry company, who, yes, built a toilet out of solid gold.

It was part of a golden bathroom created back when gold sold for a mere $200 an ounce. As prices soared past $1,000 an ounce and profits fell worldwide in 2008 into 2009, Hang Fung realized it was time to take the plunge and melt down the classy commode.

Perhaps the most amazing thing about Japan’s futuristic toilets is that they’re so common, most citizens of Japan take them for granted. The Japanese Future Bowl (not what they are actually called at all) is essentially three units in one, all linked by a programmable computer with easy-to-use buttons and a digital display.

With a few taps, you can flush away your business, get a very personal wash from a built-in bidet and then be dried off when you’re nice and clean. Oh, and of course there’s a seat warmer. Duh.