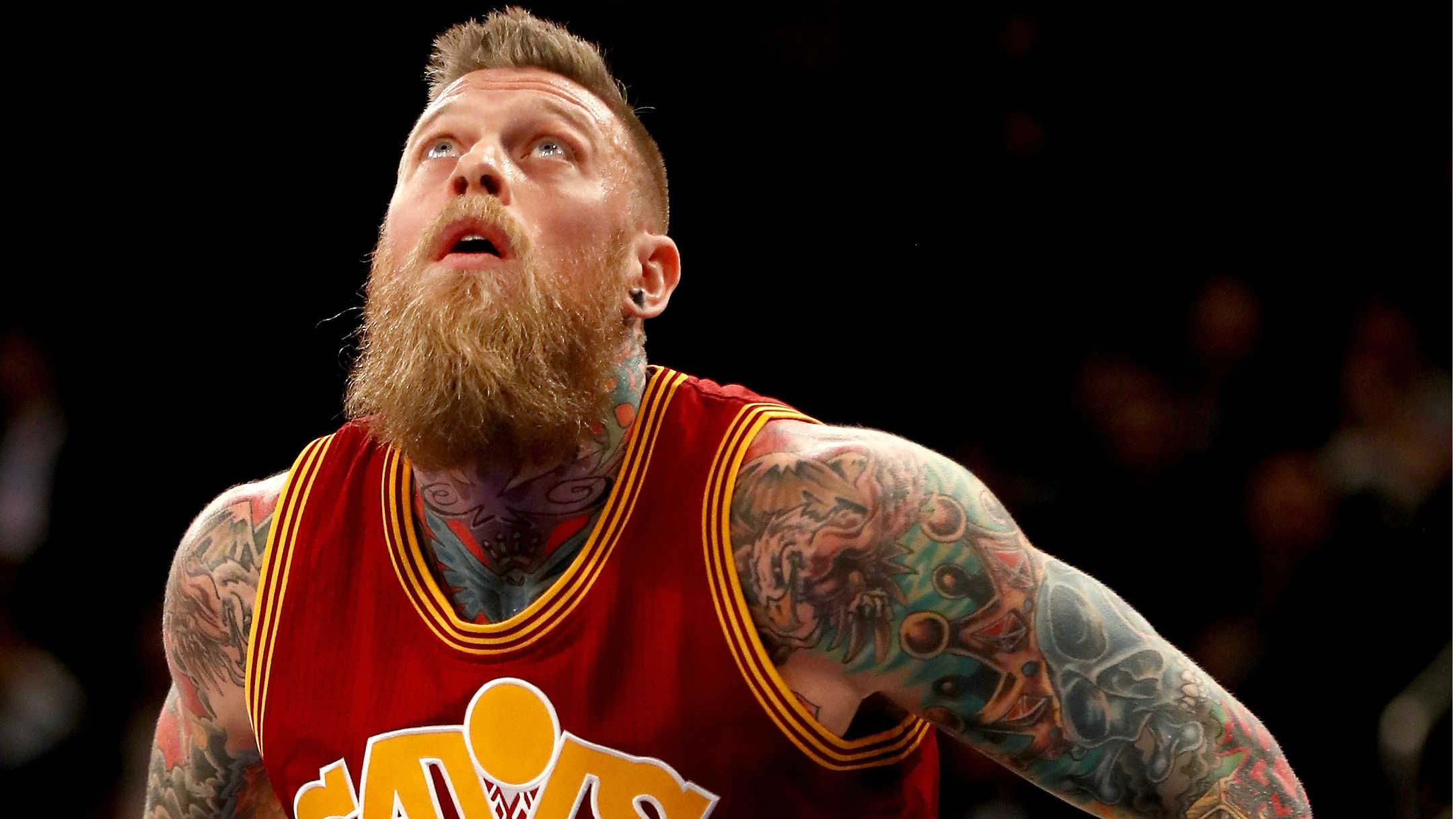 Nev Shulman, the host of MTV’s Catfish, was shocked by this story. An NBA star and model were caught up in the middle of a messy Catfish situation. The police were involved and it got crazy. Who knew a catfish could make an NBA player almost lose everything.

The Act of Catfishing

Catfishing is a new word that is described as making a fake internet profile and pretending to be someone else. The term now has an entire show investigating the catfishing activity. The host and creator of the show, Nev Schulman, had interesting things to say about the case.

He said, “What this catfish was able to accomplish is not only sophisticated, but incredibly manipulative, emotionally very traumatic, and at the same time wildly creative and somewhat impressive.”

The Police Want Him

Chris Anderson, known as Birdman, was playing for the Denver Nuggets during an NBA season.

When he was driving to the Pepsi Center in Denver for a game, he ended up getting pulled over by a cop. It was something that changed his life forever.

Search Warrant Out For Anderson

The police officers shared with Anderson that they were trying to get a hold of him all day and caught him driving on the road. Anderson then learned that other officers were going to his house with a search warrant.

He was shocked because he didn’t know what he did wrong.

Not An Average Unit

The police officers that were going to his house were part of the Internet Crimes Against Children unit. They work cases that are related to child pornography and rapists.

Chris Anderson was not sure why he would be under investigation from this unit.

Frightened by the unknown, Chris called his lawyer. The officers said that he was not under arrest…yet.

The Denver Nuggets’ coach heard about the situation and did not allow Anderson into the stadium to play the game. No one knew what he was being investigated, but it was enough to ban him from the stadium.

When he got home, he turned on the TV and learn of these serious allegations against him. From the new reports, it sounds like he was being investigated for child molestation. He was sick to his stomach.

The story began being picked up by national news outlets, even though there was not much information available. Vans started to swarm his home by the minute.

The Nuggets were in the playoffs so the child molestation allegations were coming at a bad time.

Instead of being at the Nuggets vs Lakers game, Anderson was at home watching his life fall apart.

Who is Chris Anderson?

Anderson was born in Iola, Texas. He started playing basketball when he was a little kid. When he was a kid, he said basketball kept him out of trouble. He worked in lower NBA leagues until the real NBA gave him a chance.

He then quickly became a fan favorite. Then the fans gave him the nickname of Birdman because of his growing tattoo collection.

Even though he was known for all of his tattoos, he had signature moves that everyone loved to watch. Things started to come crashing down around him fast.

This was not released to the public yet, but he had a deal with the New Orleans Hornets that was now in danger of being taken away.

This was not the first time he has been in trouble with the NBA. In January 2006, Anderson was removed from the NBA because he was using drugs. He was banned for two years, but he was able to get clean and sober. He was quoted as saying that this was a blessing in disguise because it changed his life. The basketball player checked into rehab and overcame his addiction.

The best part was that he was a better basketball player because he was always healthy. The NBA was impressed by his progress that they welcomed him back with open arms.

Who is Paris Roxanne?

Paris Roxanne was 17 years old. She lived in sunny southern California and was an aspiring model.

At the time. She only had a few thousand followers on her social media accounts. She modeled for big names like Playboy and Maxim.

Now she is 25 and traveling around for photo shoots. She has 500k followers on Instagram that love her. She is dating Don McLean, who is a 73-year-old singer who is the most famous for the song, American Pie.

When she was just 17, she tried to get in contact with celebrities of all kinds to try and get her name out there. Then she decided to reach out to Chris Anderson.

She decided to comment on one of his fan pages about talking to him. Paris never thought that Chris would actually respond to her request.

He ended up messaging her on his personal Facebook page saying, “I see you are a fan.” Paris was giddy that Chris responded. But Paris never told Chris her real age because she did not want to ruin anything.

Since they were both attracted to one another, they decided to meet up. Anderson flew Paris out to Denver one weekend. When she got off the plane, Chris was there to greet her. It was actually him!

They decided to hang out at his house with some of his friends. They played some video games and pet his dog.

Something Did Not Add Up

The more time they spent together, they realized some details did not add up. For example, when they were playing video games, Chris pointed out that her sister was alone. Paris was confused because her sister did not have a video game console, but she ignored it. Then Chris asked her about her trip to Africa. The weird part was that Paris did not even have a trip to Africa planned. When she shared that with him, they both thought it was a misunderstanding.

When Chris left for practice, he let Paris stay in his house alone. Paris decided to text Tom about the conversation he had with Chris about their friendship. Paris said in an interview, “He was telling me, ‘Go take a picture of this, go put his hat on.’ I remember being like, ‘I’m not going to go through the guy’s stuff.”

After a fun weekend, Paris flew home to southern California. She was excited to meet Chris. Then, things took an ugly turn when she shared with Tom that she was going to see Blake Griffin of the LA Clippers.

Paris started to receive scary and threatening texts from Tom. She said that “He was going to send somebody down there…he was going to have me [assaulted], and murdered, and thrown on the side of the street.”

Tom even said that Chris sent him her nude photos and he was going to leak them.

Tom Had Some Proof

Chris’s friend, Tom, then proved to Paris that he had her nude photos. She was embarrassed and angry. She did not know what to do so she went to her mother for help.

Her mom was extremely distraught of all the things Paris lied about: her age, whereabouts, and who she was actually talking to. Then, her mother got angry that a grown man was blackmailing her teenage daughter.

Anderson received an email from Paris’ mom; she was threatening him with legal action about the nude photo. Anderson and his lawyer decided to pay $3,000 to make her go away.

Chris was sick to learn that Paris was still underage. Paris’ mom decided to take the money and head to the police. That wasn’t the biggest part of the story.

The police launched an investigation into Chris and Paris. As the police dug deeper into their lives, the general public believed Chris was a pedophile. Then, the police found something odd in their investigation: the location of the text messages.

It was coming for a weird location that is pinged between the texts from Chris to Paris and the texts from Paris to Chris. They came to realize that Paris and Chris were not actually texting each other, but it was a woman named Shelly Chartier.

Who is Shelly Chartier?

Shelly was the top catfishes. She referred to herself as a loner. When her mother got sick in sixth grade, Shelly had to drop out of school to take care of her. Because of that, she struggled with her personal life. Then she decided to go on the internet to get away from her real life.

Actually, this was not her first time catfishing strangers. Paris, Tom, and Chris were not the first accounts she made. In the past, she made fake profiles of fake celebrities to get people to talk to her. One time, she used Brody Jenner.

Shelly created the fake person, Tom, when Paris was hesitant about meeting Chris. At the time, Shelly already told Chris that Paris was coming to Denver, so she had to convince the real Paris to actually go.

In the beginning, Shelly found Paris through her comment on Chris’s fan page on Facebook. All this time they were interacting, Shelly was talking to Paris. Chris and Paris never ended up talking to each other over the phone.

For her enjoyment, Shelly created a fake account of Paris to get Chris’s attention. It actually worked. Shelly thought it was a great idea to mess with these people’s lives because she was bored.

Plus, she wanted to extort money from Anderson. Her main goal all along was to blackmail Chris with the underage photos to get money.

The investigators were able to track Shelly down and arrest her. She was convicted of misuse and fraud. In Canada, she got a one-year sentence.

To this day, there is still a warrant out for her in Colorado. If she ever comes to the US, she could face up to 24 years in jail.

At the end of the day, Paris and Chris ended up being victims. The two never spoke after the allegations came out about each other.

Even though the NBA player almost lost everything, Chris is now married and still playing basketball. Paris is a model traveling the world with her new found love. Both are happy leaving this crazy story in the past.

The original story is from Inside Mystery. Thank you for the pictures and information!