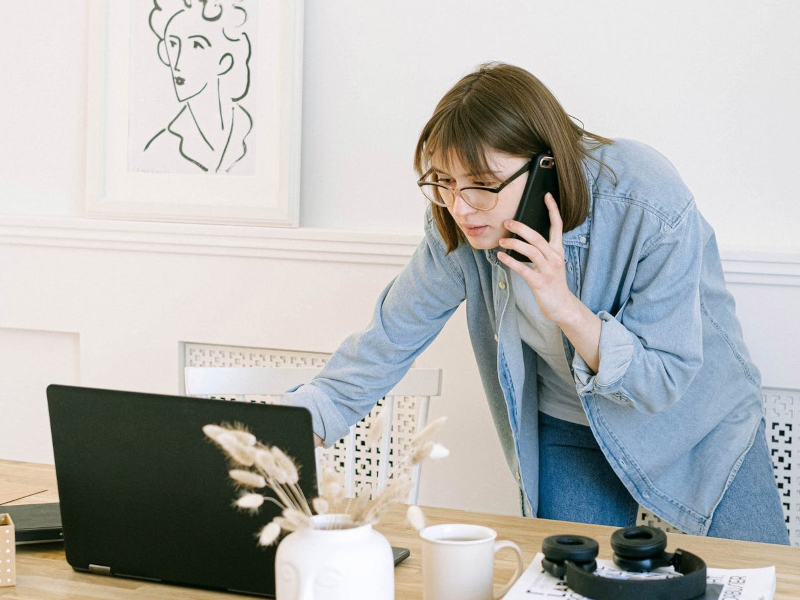 She tore the envelope open and looked down at the new number that was printed on the paper.

Was she seeing this right? Were her eyes playing tricks on her? This had to be a joke. When she looked at he boss’ face, she knew that it wasn’t a joke. Things had been really difficult, and this was about to make it worse. She sat down and felt tears pour down her cheeks. How could this be?

Tanna Marino rubbed her eyes and tried to focus on the numbers streaming across her computer monitor.

She was already on her third cup of coffee and there were at least four more in her near future. The day was already exhausting, and the end wasn’t even in sight. Suddenly, her boss poked her head into Tanna’s tiny cubicle.

The request was simple – let a new worker shadow her for the day.

However, having to show this new person the ropes quickly formed a cold pit in her gut. It writhed and churned to the point of making her feel ill. It also made her a little angry. She had applied for a promotions, but the corporate answer was more than disappointing.

It was the cut-and-paste nonsense about limited budgets, blah, blah, blah.

But standing right behind her boss was a brand-new worker – one that was apparently vying for the exact same level as Tanna. So, it this new person her cheaper replacement?

Head Down, Be Good

Working in a male-dominated field was already hard enough.

Still, she didn’t have all the facts and wasn’t going to make this woman the outlet for Tanna’s frustrations. So, she welcomed the new worker into her cubical and went about her tasks as usual, answering any questions and even getting into a little chitchat about their personal lives.

Getting To Know Each Other

“Two,” Tanna confirmed. She had to work two full time jobs. Which meant she didn’t get to see her four children that much. “So, your husband stays at home and takes care of them?” Tanna shook her head. It was another forlorn “No.”

Her husband also had to work a fulltime job. The triple income was barely enough to keep them afloat, including costly childcare. It was real Catch 22.

Life just wasn’t the same as when their grandparents, even their parents, were in the workforce. Life had just got so expensive, but salaries didn’t match. The new worker stared off into space with a troubled expression.

Nothing Out Of The Ordinary

The rest of the day unfolded as expected.

Tanna did her job and continued to answer any questions. The woman, however, still had a troubled look on her face. Had she scared the new employee into second guessing her new position? Tanna might have wanted to keep her job, but not in an underhanded way. The shocking answer would come the very next morning.

Tanna bit her nails as she waited in a lobby she had never stepped in before.

It was much higher up in the hierarchy. The office before her didn’t belong to her boss. It was at least three steps up in the ladder. When she walked in and saw a familiar woman sitting in one of the seats, and a very serious boss on the other side of the desk, she felt like throwing up.

“Let’s get straight to it,” he said, pulling out a plain, white envelope. “I know things are hard for everyone right now, but we need to change your salary.”

Tanna took a deep breath and clutched the paper. This was bad. The woman beside her didn’t give any hint of emotion.

She peeled back the lip of the envelope and pulled out the paper.

The new number punched her right in the face. Her eyes went wide, and all the air left her lungs. “I … I don’t understand” she stammered. She had got a raise … and big one! But that wasn’t all.

The rest of the note gave her more good news.

Not only was she getting more money, but she was also going to be allowed to work from home with far more flexible hours. “Why?” she asked, trying to hold back the tears. It was the woman beside her that held the answer.

It turned out the woman was the big boss of the entire company.

She had gone undercover in a disguise to see what working conditions were like for her employees. Tanna’s story had moved her in more than one way – one that would affect so many people in the entire corporation.

Tanna was right – life had just got so expensive, and salaries didn’t match.

The owner was going to increase salaries across the board as well as implementing more flexible work hours for everyone. She wanted her workforce to be able to concentrate on their productivity instead of worrying if they had enough food to put on the table. It was a win-win for everyone.

It was like an enormous weight had been lifted from her shoulders. It was even better knowing that others would have an easier time as well. She wished more bosses would do this. Imagine the amazing changes that would happen! But that wasn’t all.

The CEO of the company, Dina Dwyer-Owens, was the first female CEO of the home services franchise company that her father had founded. Meeting Tanna had strengthened her resolve to hire more female employees as technicians and franchise owners.

The story was featured on an episode of Undercover Boss, and the positive outpouring the CEO and the company received was completely unexpected.

“The response that I got from women who watched the show was great. And many have told me that I had inspired them, which is a bit humbling,” Dina said. “I also heard the same thing from a lot of men, which did surprise me some.”

The opportunity to go undercover had given her some valuable insights into how working parents were struggling to juggle their jobs and take care of their kids in today’s economy.

Insights Into The Modern Family

“I wanted to do this because I knew it would give me a firsthand look at how our franchises operate and what employees think and feel,” she said.

“This show does offer a very unique opportunity for a CEO like me.” And the insights she was learning were really driven home when Tanna has explained her predicament.

Tanna’s job was to make service calls for a Mr. Appliance franchise, just outside Houston. Tanna told the undercover CEO that her husband was a firefighter, but she had needed to take a second job to support her four children.

Dina was stunned. That’s when she decided to give Tanna the fairytale ending she deserved.

“I was totally blown away by this woman and her dedication to her family and to her job,” Dina said.

“She represented to me everything that our company stands for and supports. I knew that we needed more people like her working for us.” But, after al the positive changes, how is Tanna doing now?

It Keeps Getting Better

Just one year after Tanna’s work situation changed for the better, she’s gone from strength to strength – going from an appliance technician to a corporate consultant!

In her new position, she has more time than ever – precious time that she uses to spend with her family and encourage other women to get into more male-doninated fields with the “Women in the Trades” program.

The “Women in the Trades” Program

Tanna had made such a huge impression on Dina that she thought she would be perfect as the woman to light the way for other women to pursue technical positions.

In addition to the raise and hour changes, she gifted Tanna $5,000 to start a “Women in the Trades” program for other women like her.

“My life has changed in every possible way,” said Tanna. “The cash that was gifted to me allowed our family to get into a bigger home. I work from home now. I have flexible hours and the opportunity to spend time with my kids.”

“My biggest obstacle now has been trying to spread awareness of the scholarship program,” she said. “We would truly love to have more women working in all the different brands. This is a good way to get the required training.

As a part of her new position, Tanna recruits female workers into the Dwyer Group and into positions that are usually filled by men.

She wants more women to internalize the fact that they are just as capable as men in technical fields. She could never have imagined that all this would happen as she was struggling along and working two jobs!

After the episode of Undercover Boss aired, Tanna became a bit of a celebrity. People on the street started to recognize her face from the TV show. While becoming a celebrity overnight can be a little overwhelming, Tanna’s life keeps getting better and better.

“My experience as a whole has been phenomenal. I work for a great company doing what I love,” she told the Houston Chronicle. And, when it comes down to it, that’s all she’s ever really wanted.