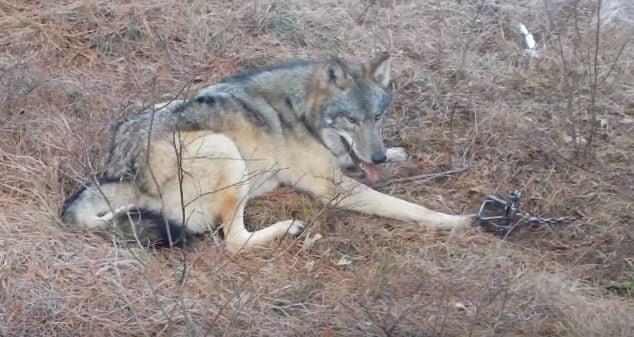 It is always a risky business when trying to release an injured or trapped wild animal. Of course, the animal does want help, but they are vulnerable. They act on instinct and they are not tame so they protect themselves, even from people trying to help them.

Getting an animal in that situation is a tricky business at the best of times. Getting them to ignore their instincts for their own well-being needs quick thinking. With a good enough plan, and a willingness to potentially risk your own safety, it’s not impossible to help them.

When this man came across a timber wolf that was caught in a hunting trap while he was with his friends, he knew he had to help. Knowing how dangerous the animal could be, he had to think fast. Fortunately, he came up with a brilliant plan.

In 2015, three Wisconsin hunters happened upon a large timber wolf that had its paw caught in a metal trap. The three men immediately knew that they had to help but they needed to make a plan and keep themselves safe too.

The timber wolf was clearly exhausted, panting heavily. While the hunters examined the trap from afar. They were well aware that the animal’s mood could change in an instant and it could go from placid to aggressive in an instant if it felt threatened.

It took the men nearly an hour to discuss all the possibilities before one of them came up with the most likely solution. In the bed of his pickup truck lay a large wooden board. He suggested that they used it as a barrier that would allow them to come close enough to help.

One of the men grabbed the board and slowly started to approach the trapped wolf. He moved slowly, getting closer and closer, making sure to not scare or startle the animal. If the animal became spooked their entire plan was for naught.

He finally got close enough to the wolf and lowered the board onto the trap, protecting himself from any danger. However, the moment he did that the timber wolf jumped up and began lashing out. The man knew that he had to work fast.

The man huddled down behind the board, keeping out of reach of the wolf’s teeth. He quickly grabbed the trap and began to pry it open. His heart was racing because he could hear the wolf getting more and more aggressive with each second that passed.

When A Plan Comes Together

At last, the man managed to pry open the trap far enough to allow the wolf to remove its paw. The three men were glad they had freed the animal, but now faced the possibility that the wolf might attack one of them. Fortunately, it simply turned and ran off in the other direction.

For these three men, the experience was both exciting and terrifying at the same time. They knew that they were fortunate that their plan had worked as well as it had. Everything could easily have gone wrong. While they will never forget the experience, it’s lucky for us that they captured the entire event on video.

Most of us would have no idea what to do if we came across a trapped wolf. Fortunately for the wolf, these three men were not only compassionate but also resourceful. Thanks to their plan the wolf will be ok. We just hope it avoids traps from now on.