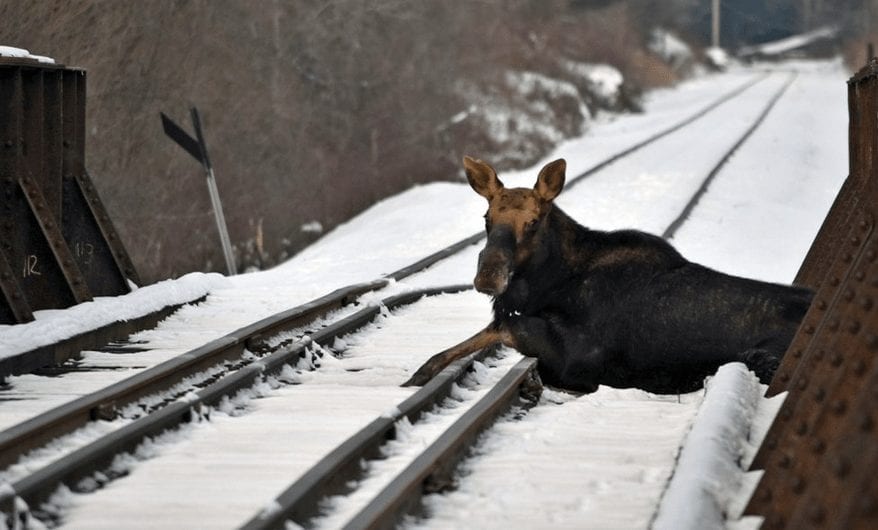 Imagine passing a railroad bridge and seeing a huge moose lying on the track. Then you realize that the poor animal is stuck, unable to move and you know this bridge is active. This dilemma is exactly what some Vermont Fish & Wildlife employees faced.

It started like any Wednesday but the Vermont Fish and Wildlife received a call saying that a moose was stuck on an active railroad bridge near Route 103 in the Ludlow/Cavendish area. They quickly rushed to the scene to see the poor animal’s plight.

The 700-pound moose had gotten its back hooves caught in the tracks of an active railroad bridge in Vermont. The moose tried to run once a game warden approached but was unable to move at all.

I Wanna Be Sedated

The game warden managed to successfully sedate the animal allowing the rescuers to get closer. They were still stuck with the problem of getting the animal out. A team of game wardens and wildlife biologists quickly worked to free the animals legs.

The team quickly freed the animal but they still needed to move it. This meant that they needed to put a sling through under the sleeping animal and raise it up with the use of a crane. Of course, the animal still couldn’t move.

The team carefully lifted the animal onto a railroad vehicle before driving it to a safe place. They carefully laid it on a snow bed with two crates propping it up in a wooded area, This was a very tricky operation for a number of reasons.

‘The focus of the Vermont Fish and Wildlife Department is on population-level threats to species, and it is rare that this kind of intervention makes sense because of the risk posed to the animal and responders,’ they wrote.

‘Such recoveries are many times not successful. It’s great to see that in this case it ended well for those involved and for this very fortunate moose,’ they stated. Vermont Fish & Wildlife also stated that moose in that area are ‘increasingly under stress’ due to climate change.

‘Wildlife biologists are concerned that warmer falls and early springs are increasing winter tick numbers that can have detrimental effects on moose,’ they wrote. Winter ticks are a blood-sucking parasite that makes the moose weak. A single moose can have thousands of ticks at once.

As territorial and aggressive as moose can be, they do sometimes need the help of humans. This was the case for Erikas Plucas when he discovered an abandoned moose baby. He knew he had to help the animal but he never expected the bond that would be formed.

Erikas Plucas lived on a farm in the Lithuanian countryside. It wasn’t strange for him to see wild animals on a regular basis since his farm was located right next to a large forest. These encounters were not uncommon though he was about to have a very unique encounter.

It had been a normal day for Erikas when he came home and discovered something unusal at his front gate. There at the gate to his farm was a baby moose. The poor animal was lying there and practically motionless and completely helpless.

He automatically assumed the poor animal must have wandered out of the woods and towards his farm. Something seemed off, however. He cautiously approached the calf only to see something was very wrong once he came close.

After Erikas spotted the baby moose lying alone at his front gate, he looked around to see if the animal was all alone. He assumed the calf’s mother had to be milling about somewhere, but she was nowhere to be found.