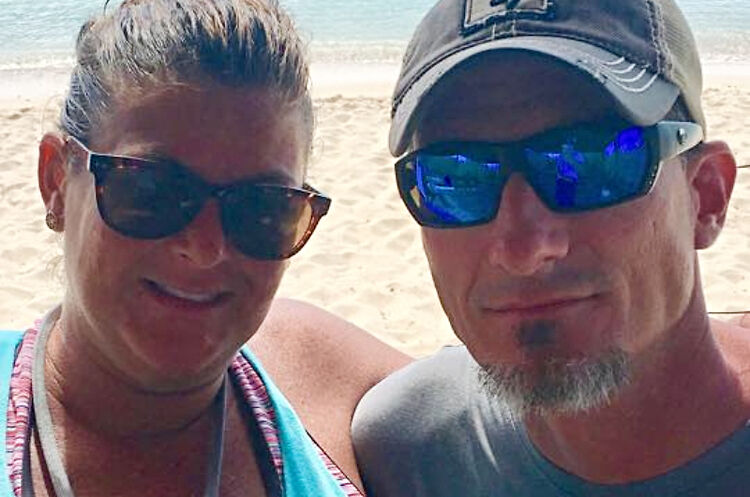 Rob Edwards, a family man from Florida, couldn’t believe the week he was having. It was a special one for him, as he had recently celebrated 21 years of being happily married to his wife.

But there was also another upcoming event that had him over the moon.

Rob loved his children. They were his life. And his eldest son, Cole had just finished high school.

So everyone was enthusiastically preparing for his graduation ceremony. However, Rob could have never imagined what fate had stored for him.

On the graduation day, Rob started his day early so he could finish everything that he had to do before the ceremony. His first stop was the bank. When he arrived at the bank noticed that there weren’t many people there.

But even if the line had stretched around the entire block, he wouldn’t have cared.

Rob was in a such good mood that when he saw a lady rushing to get inside the same bank, he opened the door with a huge smile and told her that she could jump ahead of him in the queue.

The woman at first was a bit reluctant.

She lingered before the open door, fiddling with her bag and glancing from the cashiers’ desks to the exit.

Granted, acts of kindness were rarer than they should be, but the simple act of letting her go ahead seemed to shock her more than most people.

After a few more awkward moments, she finally gave a small, nervous smile to Rob and thanked him for his kindness. After that, it was the standard chitchat between strangers trying to pass the time.

It was the standard cycle of topics – weather, traffic, and whatnot. The woman half-listened, nodding … and continually glancing at the long line of employees counting wads of cash.

Maybe she was in a hurry? Or there were a lot of things on her mind. Because during the wait, he couldn’t help but notice the white-knuckle grip she had on her bag.

A bead of sweat trickled down her forehead.

“Today my son graduates. I’m slowing down and want to savor every minute,” Rob told the woman.

“Oh yeah? He must be excited,” she said, finally joining the conversation. Her hand went down to her pocket and gripped something inside.

Rob told her more about his family and the big, upcoming event. He couldn’t help it.

The joy was bursting to get out. He reached for his phone, eager to show off photos of his eldest child. But the juggling made him drop his money clip and credit card bundle on the floor.

The woman acted first. She bolted to the ground, faster than necessary. She scooped up the items and looked Rob right in the eyes.

“It’s so wonderful your boy is graduating. I would do anything to make sure my boy has the same future.” She hesitated, still holding his belongings.

“I completely understand. I’m here to get him something for the big day.” He wanted to take out a stack of bills and watch the look on his son’s face as he counted them.

It was going to be fun-money for him to splurge on whatever he wanted. But he needed his card and she was still gripping it tightly.

She finally handed his things back with another nervous smile and a couple more beads of sweat. A free cashier called for another customer.

The woman thanked Rob once again and scurried for the desk. He would never be prepared for what this woman had done … and was about to do.

The woman clumsily brought out a stack of papers and a bank book. Her face had gone white and looked as if she was about to fall over.

He noticed her hand go down to her pocket again, this time shoving it deep inside.

She glanced back and Rob again, then quickly looked away. Even if he was utterly happy, he couldn’t help but notice the very stranger behavior.

It only got weirder when she leaned in and whispered something to the cashier. Whatever it was, made the employee’s eyes turn wide in surprise.

If was finally his turn. He approached the employee’s desk and completed his transaction with a big smile on his face.

However, that smile wouldn’t last for long, as what was about to happen next would shock him to the core.

He slipped his card to the cashier and asked for the sum in 10s – it would be more fun for his boy to count that way.

But the cashier suddenly looked at her screen with wide eyes. “I’m sorry, sir. I can’t give you that amount.”

Rob stared back, wondering what the problem was. He was sure he had enough in his account.

He had triple check before he left! The other worker came over and slipped him a note. “It’s from the woman, sir.”

He turned to see the woman rushing out of the bank. What was going on?! It was then the panic set in.

He reached for his money clip and card bundle again. She had scooped it up, but had she grabbed it for a different reason than just giving it back to him?

All the cash was there. And so were the cards. Thank god. The answer had to be in the slip of paper she had given him.

He quickly opened it and gasped at the brief message that looked like it had been scribbled in a hurry.

Next, the cashier slipped him a plain white envelope. This wasn’t happening.

He stood there, speechless, trying to put the pieces together that had led to this unforgettable moment. The words scrawled across the paper burned into his brain.

The reason for the odd behavior was now clear. “I’m so sorry. I suffer from anxiety and it’s hard for me to be out of the house.

I didn’t mean to be rude. Thank you for your kindness. Congratulations on this wonderful day.” But what was in the envelope?

He stood there staring at the contents for a good minute before he could finally speak.

The two employees assured him it was real and even if it was something they had never seen before, there was nothing wrong with keeping what he was holding.

He felt the joy turn into a new level that brought tears to his eyes. It was money – $200! But he still couldn’t understand why.

The apology note was already more than enough. Rob needed answers so he ran out the door.

Rob scanned the street. She was already pulling away. He bolted at full speed, waving his arms and trying to get her attention before she disappeared.

Thankfully, at the last minute, she saw him and stopped the car.

When Rob approached the woman and after catching his breath from running he said, “I can’t take this!”

He tried to hand back the envelope through her window, but she pushed it back, insisting he keeps it. “But why? You don’t need to do this.”

The woman explained how he was well aware that her condition made people uncomfortable. Going out to the bank was a big step for her. But even if she had been a bit “off”, Rob’s words had touched her in a very deep way.

As a mother, she understood what he was feeling, even if she had trouble showing it.

“When you talk about your boy, you glow. You’re a blessing to him, I want to bless him too”, the woman explained.

She gave a genuine smile and nudged the envelope back again. Rob wiped away another tear. There was just one more question.

It was none of his business, but what was in her pocket? She chuckled and pulled out a little figurine of an angel.

Her son had given it to her when she needed comfort in difficult times. Rob thanked her over and over again and begged to take a picture together. She obliged and they went on their separate ways.

The time for the graduation ceremony came, Rob was overjoyed and couldn’t stop smiling. He was so proud of his son, but what had added to his happiness was the incident with the woman.

He couldn’t get it out of his head, so he made a post on Facebook about it. The response was CRAZY!

Everyone loved that story and there were countless comments. “First of all kid, I can’t believe your boy is 18! Second, I’ve been thinking a lot about the transformational power of love and kindness.

Our life is as a vapor…it is here and then it’s gone. Thanks for sharing your blessings…”, somebody commented on Rob’s post.

A Facebook friend of Rob’s also wrote, “The whole point of life right here! And it could not have happened to a more deserving person. Great story Rob Edwards! And so well told, as per usual.

When you write a book look me up. I reckon I got a few titles for you already!”.

Rob couldn’t hide how much the woman’s action had touched him and how grateful he was. “I was so touched. I don’t know her name, I’ve never ever seen her before. But I will never forget her love. I asked to take a picture with her. And hugged her neck. We need more of this in the world today,” Rob wrote, “…not the money.

But kindness. I hugged a complete stranger today. My son who I love with all my heart was shown love,” he said.

“Many of you who know me know what I believe in. Sounds kinda familiar, doesn’t it? It warms the father’s heart to love the son.

I am blessed. Cole Edwards, I’m so proud of you! To my bank customer friend. THANK YOU!” Rob added.

A heart-warming fact is that in the US there is an entire day dedicated to doing random acts of kindness in February.

That day you just choose a random act of kindness and you perform it for a stranger just to help them and brighten up their day. But that’s not all.

“What a precious story! Thank you for sharing! God bless her for sharing love and being an example of what love looks like.

We need more love in the world!!!” wrote another user on Rob’s post. The funny thing was that through the comments we found a similar story to Rob’s.

Another strange and heart-warming story was told by an Imgur user named “gingersnap1316”. The user claimed that while she was at home alone someone rang her doorbell.

When she opened the door she didn’t recognize the man standing in front of her. Then the stranger asked her something really weird.

“Are you Karen?” the stranger asked her. “I told him no, that Karen was my mom and he gave a quick smile and handed me an unmarked envelope and walked away.

I get inside and open it up.” What was inside the envelope shocked her! It was $1,000 in cash along with a letter!

“Please accept this gift as an act of random kindness. A cherished member of our family devoted much of her time and resources to helping people through ‘Random Acts Of Kindness’. She gave to others in many ways, and always did so anonymously.

One way our family has chosen to honor her memory is to continue in the tradition of helping others in the community with acts of random kindness,” the letter wrote.

“A ‘Random Act Of Kindness’ does not have to involve the giving of money. It can be as simple as sharing your time with someone, lending an ear, or offering a compliment.

The most important part is that the act is unsolicited and done so with no expectation of anything in return.”

Every kind of action has a huge impact on someone and it’s really nice whenever we can to help someone in need.

So be kind and the faith in humanity will be restored!