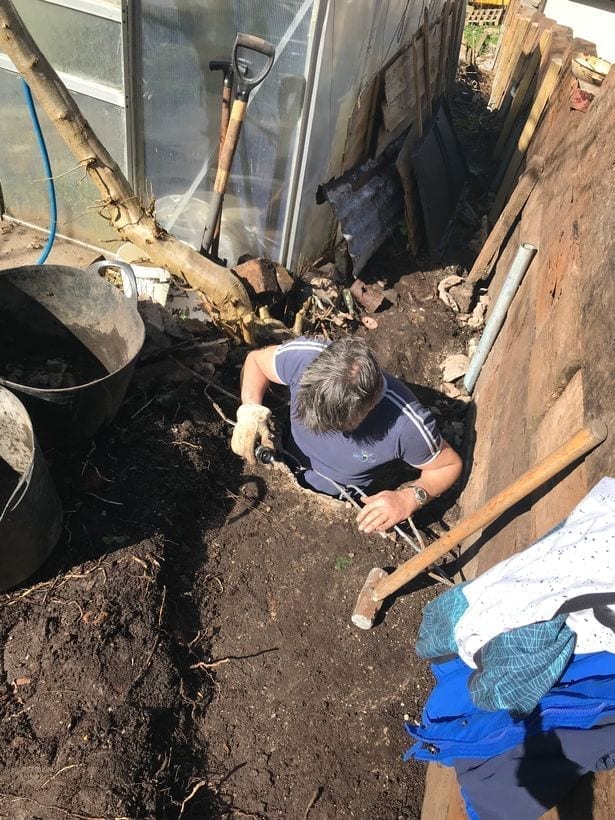 Gardening is seldom considered to be bad for your health. While spending a lot of time bent over in the sun might cause some back pain and sunburn, no one will think it a potentially fatal past time. However, one man from England recently proved otherwise.

A man from Pensford village in Somerset and his son were spending an afternoon building a new fence. This is naturally a fairly simple and straightforward task. While digging one of the post holes, however, he discovered something which put both of them in serious trouble.

It was early in April of 2018 when Dom Lowe and his son Jon were installing the new fence made of railroad ties. While digging in one particular part of their backyard. However, while digging one of the post holes his spade struck something unusual.

To be precise, Dom didn’t actually strike something. Rather, as he was digging the post hole, his shovel broke through into a hidden chamber under the ground. The men were understandably curious to see what they had discovered.

The two men had inadvertently discovered a haul of historical value the would excite any history buffs. Dom called their discovery a “cesspit”. They had found a stash of bottles, colanders, an OXO gravy tin, and numerous other artifacts dating back to the 1940s and 1950s. There was one item, in particular, however, that caught Jon off guard.

Jon picked up a rusty metal tube that was approximately six inches tall. Dom recalls that Jon didn’t know what he was holding at first. When Dom saw it he immediately recognized it and told Jon what it was. Jon in turn “handed it over straight away.” What had it been?

Dom believed that the tube Jon was holding was part of an unexploded incendiary bomb dating back to World War II. They kept looking and once they found more parts of the bomb, Dom’s suspicions were confirmed.

While you might think that this is a very strange thing to find in his back garden. However, this isn’t too surprising. Bristol, which is not far from Pensford, was one of the major targets for Luftwaffe bombing runs during World War II…

The bulk of the bombings in Bristol had ended in 1941, though smaller bombing raids still plagued Bristol until the end of the war. That means that there were many such devices found in the area. This is also why Dom did what he did next.

Whether it was an act of bravery, confidence, or complete foolishness, Dom almost automatically entered a zenlike state. “To be honest,” he said, “there was no panic. I just put [the bomb] on the fence.”

However, the bomb didn’t stay there. Instead, it rolled off the fence and fell to the ground. Needless to say, both Dom and Jon panicked when they saw the bomb falling. “When it hit the ground,” Dom recalled, “I have to admit we did both run for cover.”

Longer Than It Seemed

The next few seconds felt much longer to the pair that it really was. However, the bomb thankfully didn’t explode. That didn’t mean that there was no danger, however. They still didn’t know if the bomb was truly disabled of if there were any more lurking beneath their feet.

Dom quickly called the police to the scene. Two officers stayed with the father-son pair while they waited for the bomb squad to arrive. The police also gave the men some sound advice: don’t approach the unexploded ordinance.

It wasn’t long before the bomb disposal team from the Royal Logistic Corps arrived on the scene to assess the situation. This squad was the best to determine whether or not the bomb was still capable of exploding or if it was safe.

Once he had taken a closer look at it, the bomb disposal officer relaxed and didn’t worry too much. In fact, he didn’t even wear the padded suit or use the bomb disposal robot. He even went so far as to pose for a photo with the device. That’s when he gave Dom some interesting information.