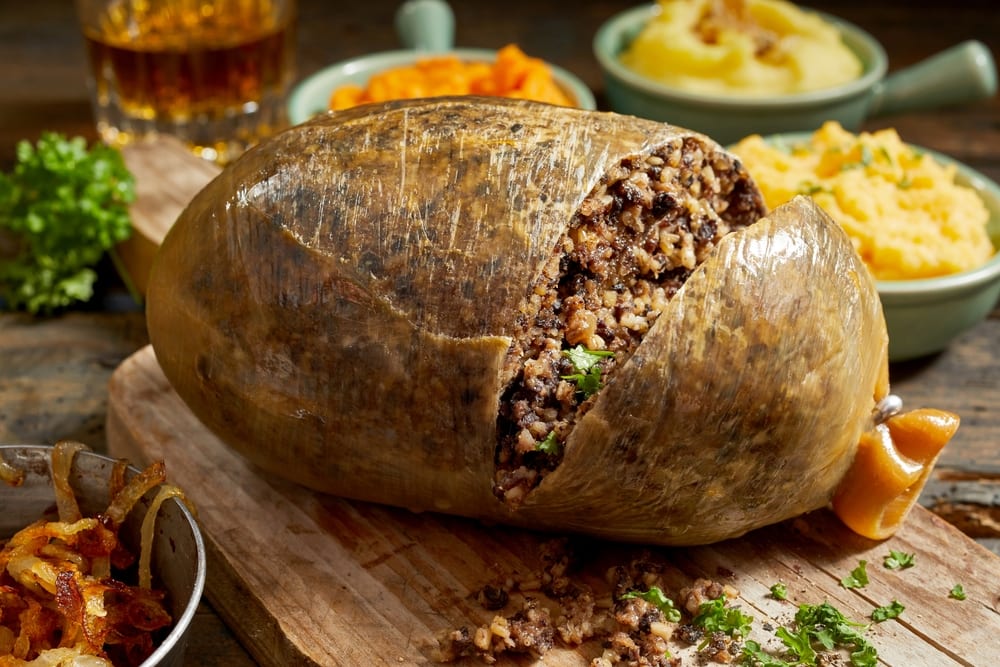 I’ve always considered the best thing about traveling to be the opportunity to try interesting food worldwide. The challenge is always to let go of what I consider “normal” when it comes to food and accept that every country and culture has different delicacies and eats a variety of different things. But where, exactly, do we draw the line when it comes to being adventurous with food?

Sit back as we take you through interesting food from around the world – are you game enough to try them?

Eat your heart out. The cobra is slit open in front of you and its beating heart is placed into a shot glass of its own blood. You’re expected to eat the heart and chase it with rice wine.

While this is indeed a very interesting and crazy experience, it’s also quite cruel, and many people end up being regretful afterwards.

The largest puffin colony in Iceland is in the Westman Islands – where it also happens to be the national dish.

It can be boiled in milk sauce or smoked and is served in certain restaurants if you’re ever there to try it.

Imagine a pie with fish heads sticking out around the sides staring at the sky. Stargazy Pie is served on Tom Bawcock’s Eve (Dec. 23) and originates from the Cornish village of Mousehole in England.

There is a legend that tells the story of the heroic sailor who rowed out one December evening in high storms and returned with a catch big enough to feed the starving residents.

Casu Marzu is often known as ‘rotten cheese’ because it is made from Pecorino that has gone really bad.

The larvae of cheese flies are then added to the Pecorino to hatch inside and digest the fats. The delicacy can then be eaten with or without the maggots. Delizioso!

I grew up believing that century egg was a 100-year-old egg. Turns out it isn’t, but it may as well be, since it’s basically a rotten egg. Traditionally, century eggs were made by preserving chicken or duck eggs in a mixture of salt, lime and ash, then wrapping in rice husks for several weeks.

The egg white becomes gelatin and the yolk turns dark green and stinks of sulphur. As someone who grew up eating this, I must say, it’s actually quite delicious despite how it sounds.

Escamoles, or ant larvae, is a dish native to central Mexico and was once considered a delicacy by the Aztec. The larvae are said to have a consistency to cottage cheese and taste nutty.

This interesting food is normally eaten as the filling in a taco or omelette. Are you keen to try this ant egg caviar?

Shirako translates to “white children,” but refers to the sperm sacs of either cod, anglerfish or puffer fish.

This is a traditional meal from the Inuit (indigenous people of northern Canada, Greenland and Alaska) of frozen whale skin and blubber.

Muktuk is normally served either raw or pickled and on a plate, it resembles assorted licorice or candy and is extremely chewy!

Hakarl is the rotting carcass of a Greenland shark. To prepare hakarl, the shark is first beheaded and gutted. The shark is then placed in a shallow grave and covered with sand and stone for two to three months. This causes the internal fluids to drain out, making the interesting food safe to eat.

After this, it is cut into strips and hung to dry for a few more months before serving. The late Anthony Bourdain described it as “the single worst, most disgusting and terrible tasting thing” he’d tried.

So this is not a food, but we had to add this one in. Airag is the traditional national beverage of Mongolia and is made from fermented mare’s milk, which turns into a fizzy, sour and slightly alcoholic (around 2%) liquid.

Also known as corn fungus, corn smut or Mexican truffle, this interesting food is actually a plant disease that grows on ears of corn around the kernels in puffy, grey clouds.

Most people would look at this and think of it as diseased corn but in Mexico, it’s a delicacy and is used in various dishes such as soups, enchiladas and salsas.

Bosintang is a Korean soup made with a delicious blend of spring onions, perilla leaves, dandelions, a variety of spices and … dog meat.

It is claimed that bosintang increase virility, and it is one of the most common Korean foods made from dog meat. However, it has been heavily criticized inside and outside Korea, so you won’t find it on menus today (though if you’re looking, your best bet is in rural areas).

This dish doesn’t need much of an explanation because it’s, well, jellied moose nose. To cook this dish, the snout is removed from the moose, sliced and boiled until all the hair can be plucked away easily.

After the hair is removed, the snout is returned to boiling water, and onion, garlic and spices are added. Eventually, the nose softens into a gelatinous texture. It is then sliced and covered with a broth that eventually sets into a jelly.

So you saw Korea’s dog meat soup earlier, and here’s another unusual soup to add to the mix. This soup consists of ant eggs – partial embryos from the white ant – and a few baby ants to add sourness.

The dish is eaten in a few different Southeast Asian countries, but it is commonly found in Laos and Thailand.

These deep friend spiders were first eaten by Cambodians starving under the Khmer Rouge regime. Strangely, the snack has become very popular, and little tarantula trolleys can be seen in street markets.

The crunchy snack will set you back only $1!

Nothing gets wasted in Japan, and that includes the eyeballs of seafood! Tuna eyes are plucked out and sold for cheap in supermarkets.

When it’s time to eat, they are usually boiled or steamed and served with garlic or soy sauce.

Cuy is guinea pig that is served roasted and whole – head, claws and everything. It is eaten in a few countries in South America but is most popular in Peru.

As I ate my way through Peru, I couldn’t pass the opportunity to try a bit of cuy. It’s a less tasty version of roast pork with the smell of microwaved chicken. In other words, not that great.

Haggis is a delicious crumbly sausage made of minced sheep’s heart, liver and lungs cooked inside sheep’s stomach. The traditional method for cooking haggis is to simmer it in a pot for hours, although there’s risk of bursting.

It can also be baked in a casserole dish with some water. It can be served as part of a fry up for breakfast or at dinner.

Salmon is a staple part of the Alaskan diet so it’s no surprise that there are some interesting dishes arising from it.

One of the traditional delicacies is the fermented head of a king salmon, which is buried in the ground in fermentation pits, put into plastic or wooden barrels and left for a few weeks or more.

Balut is a duck fetus in an egg that is boiled and eaten from the shell. To eat it, you tap the top ofthe egg with a spoon, peel some of the shells away and use a spoon to scoop a bit out at a time. Alternatively, you can also take the entire thing out and see the fetus in its entirety.

It is commonly eaten with salt, pepper and herbs. Balut might not sound that appealing, but it actually makes quite a nutritious snack since it’s packed with protein and calcium.

How many of these interesting food dishes have you tried? Is there anything here that you would love to taste or are completely writing off? Let us know in the comments below!