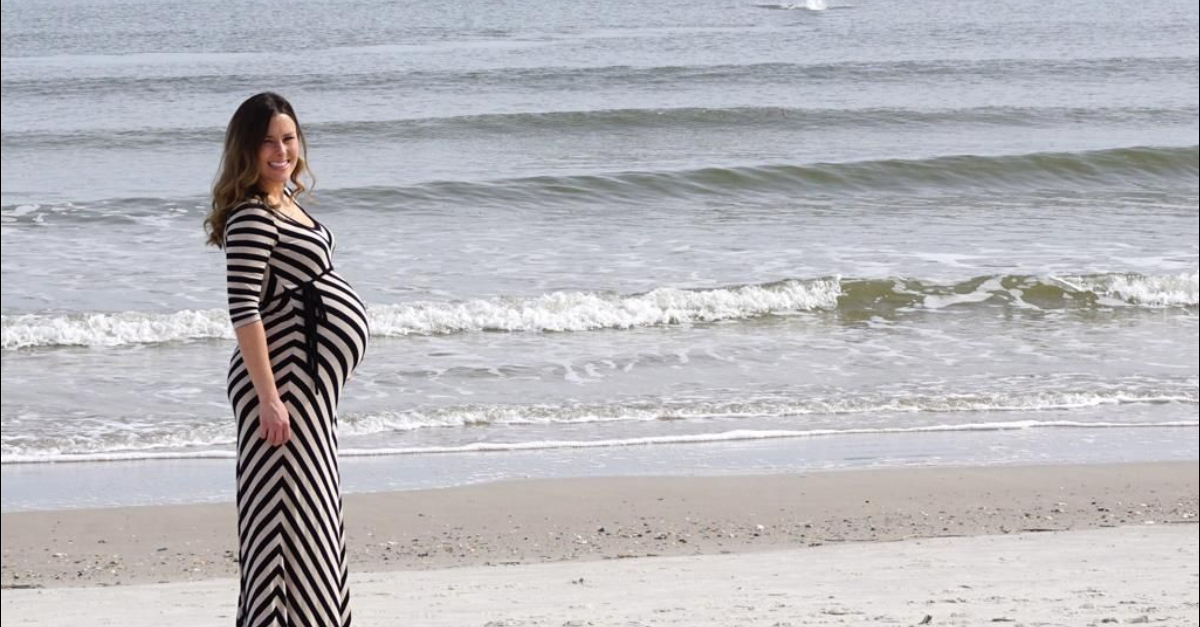 A heavily pregnant woman and her husband went out for a lovely day at the beach. Her husband wanted to snap a few priceless maternity shots. However, neither of them suspected how the day would turn out.

While enjoying a few rays of sunshine and sand, something amazing happened. Something was lurking in the water. Something large, right behind the expecting mom. What could have been?

Dan Mozer was by no means a professional photographer. He loved to take photos, though, and his wife was the perfect subject. Dan was eager to snap a few shots of his pregnant wife, Angeline. He had to have the ideal setting for his beautiful wife.

So the couple chose a beach location. However, this proved a little tricky as Angeline was in her third trimester. Being heavily pregnant meant Angeline could not move easily. Something the couple quickly realized would be a problem.

On their first try, the couple went out to Atlantic Beach. However, being new to the area, they were unfamiliar with the weather patterns. Arriving at the beach, they were met with a ferocious thunderstorm.

Knowing this would be no good for the shoot, Dan and Angeline headed home. This meant they’d have to return to the beach at another point. If only they knew what waited for them on the next try.

Saddened by their failed photoshoot, the couple returned home that day. They started to realize how difficult getting the perfect maternity photos was becoming. Angeline was already in her third trimester. This meant their beautiful baby would be arriving soon. They didn’t have much time.

Dan began to research the weather patterns surrounding Atlantic Beach. He found out that the following weekend would be excellent for their shoot. But that wasn’t all he discovered about the Atlantic Beach area. What was lurking in the waters?

Danger At The Beach

New to Jacksonville, Angeline and Dan weren’t aware of what was going on at that beach. However, there have been several exciting creature sightings in the past. Two of these stood out to Dan. Atlantic Beach was known for some shark and stingray sightings.

Coastguardsmen of Atlantic Beach were even circled in their boat by a great white! Dan didn’t think this would be an issue. But the thing you least expect happens sometimes.

Even though Dan had learned of the shark-infested waters, his mind was set on taking the perfect photos of his wife. He had to get this maternity shoot done before it was too late. So, he and his wife Angeline headed off to the beach again. It was a beautifully sunny Saturday afternoon.

The waves were hitting the sand just right. Against better judgment, Angeline wandered into the water. But in her heavily pregnant, sluggish state, this could be a terrible mistake.

Panic At The Beach

In the distance, an ominous figure could be seen emerging from the water. Some people rushed to the shore to get a better look. Others scattered to make their way out of the water. All in all, the beach was in a state of great chaos.

Some people were fleeing, and some were chattering excitedly. Dan didn’t know whether to panic or join in. But Angeline found herself in the middle of the madness. And in her pregnant state, she was left behind.

Luckily, Angeline was safely on the shoreline before disaster struck. However, moving around on beach sand wasn’t easy in her state. Even fit people have trouble moving in the sand sometimes.

Now, rushing out of the soggy sand while being heavily pregnant was definitely not an easy task. Nonetheless, Angeline was safe, which was all that mattered to Dan. The couple decided to continue with their shoot. But the creature still lurked close by.

Dan was finally happy because the photoshoot could continue. However, the worst was yet to come. Determined to get the perfect shot, Angeline ventured closer to the waterline. This was a risky move, considering the recent commotion on the beach.

But never the less, the couple didn’t want to stop. Angeline posed, and Dan snapped, but something seemed to be missing. So the couple got even closer to the shore. Then, terrifyingly, something began moving in the water.

Dan raised his camera to his eye to take the shot. He was met with disbelief. Right behind his wife, a large ominous creature lurked in the background. He saw the creature swimming towards the shoreline. He started to panic.

Taken aback by its speed, Dan immediately thought back to the shark warnings he had heard earlier. The large, dark mass swam like a bullet through the water. Closing in on his wife, Dan knew there was not much time to react. And then, the creature surfaced.

In a majestic motion, the dolphin jumped out of the water. Dan could not believe his luck! Trying to furiously capture the shot, he positioned his camera perfectly. But, because the dolphin was quick in its moves, it wasn’t as easy as he hoped.

Dan didn’t want to give up. The photo would’ve made an incredible memory! But just as all hope was fleeting, the dolphin surfaced once more. Dan had to act fast.

Just as he thought all hope was lost, Dan remembered something. His camera came with the “Burst” option. This setting would capture three frames in quick succession of one another.

This allowed a photographer to capture things he would usually miss. Setting his camera to “Burst,” Dan waited, holding his breath. The dolphin would make the shot perfect! But things were looking bleak for Dan until the water broke.

Once In A Lifetime

Once more, the dolphin surfaced, and thanks to ‘Burst,’ Dan immortalized the image. Unfortunately for Angeline, she was too slow to turn around to see the creature. But she was the main part of it.

She will forever have the precious memory captured on film. Dan could not wait to look at what he had captured. When Dan looked at the pictures, he could not believe his eyes. The photo was amazing.

The shot was absolutely perfect! Dan was thrilled with how the photo had turned out. The final shot had captured the dolphin mid-air. His wife was perfectly posed as well. Her belly angled towards the creature and her hair blew in the wind.

When Dan shared the photos, everyone on the internet went nuts. People were in awe of the incredible story. The image soon went viral, and the couple was thrilled. But what about their lovely little baby?

What About The Baby?

In the next few months, a beautiful baby boy arrived. The Mozer pair had now become the Mozer trio. The family had a new member. Little Courtland Thomas Mozer was a happy, healthy, blue-eyed boy. Mom and Dad have dubbed him “Aquaman.”

A fitting nickname to fit with his incredible in utero photoshoot. Just why the dolphins chose the Mozers, they will never know. But thank goodness they photobombed this pic and turned it into something epic.