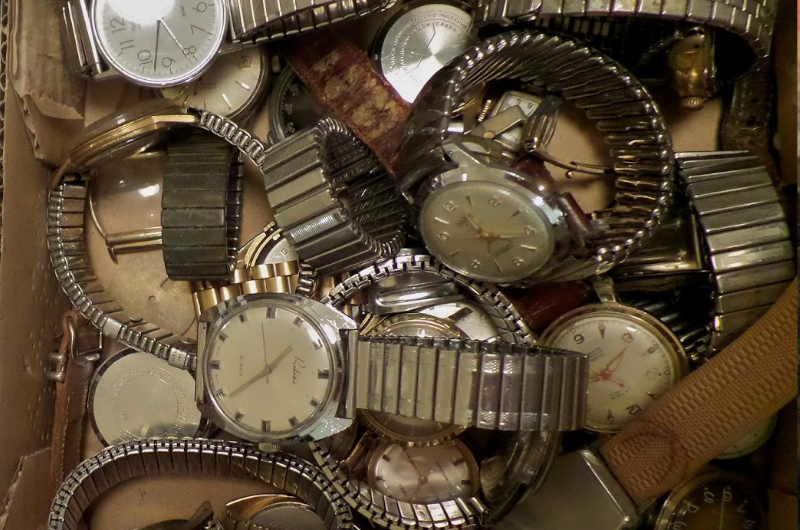 He drug through the box of old, rusty watches. Most of these watches were “fossils” that were worth almost nothing.

When he got to the bottom of the box, he raised his eyebrows when one watch caught his eye. It was nothing fancy, it was just a simple black and silver watch. It was when his eyes scanned over the band name that he almost fell over in surprise. He grabbed it quickly and rushed to the cashier.

Zach Norris was from Phoenix, Arizona. He never really paid any attention to nor cared much about watches.

He had never so much as taken a second glance at accessories counters before. It was when he inherited an Omega Seamaster that a switch went off in his brain. It was a coveted collector’s item! He wanted to know more about it.

After he inherited the piece, he started following online groups dedicated to collectables. In his free time, he would look up yard sales and estate auctions with the purpose of finding more of these items.

He was lucky enough to find another Seamaster for dirt cheap when he visited a local Goodwill. He knew that the watch was worth a whole lot more than the $40 it cost. But he decided to get it after lunch, which he would discover was a big mistake.

A Blog To Watch

When he got back, his energy levels dropped.

He felt shattered when he noticed that the spot where the watch once sat was now empty. Someone else had bought the watch, and it wasn’t too surprising. The collector’s business is extremely competitive. He learned a valuable lesson. But he didn’t know that his biggest find would come when he least expected it.

Zach made his way to another thrift store, this time he wanted a golf cart.

But it was a dead end and he was about to leave. But that’s when a box of watches caught his attention. He picked it up and gently shook it to see what was inside.

He squinted when the letters “Le C” caught his attention. He grabbed the watch and read the full name. His eyes widened when he read “LeCoultre”. He could not believe this. It was an extremely rare “Deep Sea Alarm” version.

It was a limited edition! To a collector, this was worth gold. It only cost $5, but how much was it actually worth?

Once he reached his home, he didn’t waste any time as he hopped on his computer and opened one of the message boards. Offers to buy the watch came within seconds after he posted about it. People were raving about it and offers were shooting higher and higher by the minute. But there was a problem.

He knew the money would be life-changing, but he couldn’t imagine giving the watch away. He wanted to keep it. This was one of the first watches ever created that had an alarm for deep-sea divers. That’s when another message popped up on his computer. He recognized the name as his jaw dropped.

The man who messaged him was a famous Rolex dealer named Eric Ku.

Eric was a collector too, and he was one of Zach’s heroes within the collectors world. Zach knew it was an easy deal to accept, that is, if Eric agreed to Zach’s unique conditions.

Zach wanted an Omega Speedmaster Professional with the purchase price.

But he also expected Eric to fly out and personally deliver it to him. He wanted to meet one of his heroes. They made a deal and he flew out to San Francisco. But how much was the watch worth?

The two also became fast friends and decided to spend the day together eating and chatting at a local lobster restaurant. It was one of the best days of Zach’s life. There was one more interesting thing about the buyer …

He already had another Deep Sea Alarm.

Eric let out a huge breath of awe when he found out. It turns out the DSA that Eric had was actually in such amazing condition that it was nearly “too perfect”, and, as a result, he was nervous wearing it out in public. Eric grinned and asked an obvious question…

“So, what are you going to spend the money on?”

Zach leaned back and bellowed a laugh. Fair, okay that was fair. “Well, I’m getting married soon. I want to use some to make the day extra special.” “That’s a lot for a wedding?” Zach gave a shy grin. “Well, there is one more thing.”

He wanted to buy yet another luxury watch – another investment into his hobby.

Each discovery made the itch stronger, and after this, he wasn’t going to stop anytime soon. The rest would be small improvements to the quality of life for him and his fiancé. The money couldn’t have come at a better time.

When he got back from his trip, the message boards were still abuzz with the news. People had inundated him with questions.

He typed a few answers out, shut the computer down, and went to make some popcorn with his fiance for movie night and talk about what to buy for the wedding.