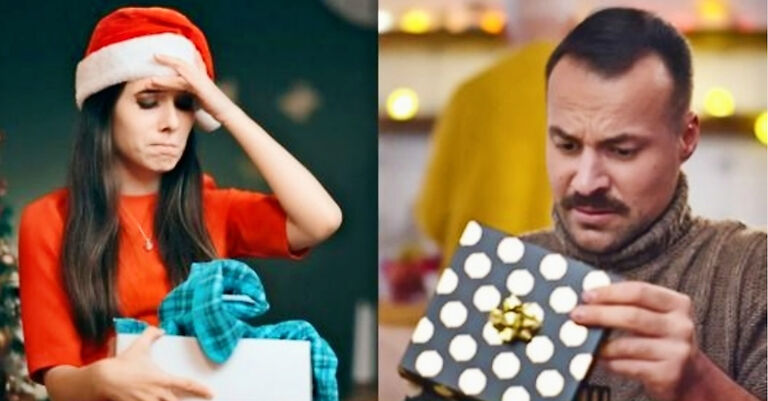 The holidays are a time of gathering together, feeling the joy of the season, and of course, giving. Nothing beats that long-awaited feeling of tearing open presents gifted by the people you care about—until that feeling turns to utter disappointment.

They say you should never give a gift horse in the mouth. However, sometimes the gifts are so bad, that you want to kick that gift horse right where it hurts and send them packing straight back to the North Pole. Read on to hear some holiday gifts that left people totally Scrooged for the holidays.

It’s Christmas morning and I can hear my nephew, who lives in the apartment downstairs, throwing a temper tantrum because he thinks his sister got “larger gifts” from Santa this year.

His dad goes, “Are you joking right now? You better be joking. Say just kidding. Oh my god, tell me he’s kidding.” Seriously, the kid is a spoiled brat. ~ oohkt

Bringing Down the House

What ruined my Christmas this year was when my cousins got a mini bouncy castle, only for disaster to strike. The entire thing popped—while there were, like, ten screaming children inside of it, all under eight years old.

When it happened, the amount of crying and shrieking almost broke my eardrums in half. Traumatized children do not make for a happy holiday. ~ xClovis7

My mom is notorious for bad presents. I have received such delights as toothpaste and vitamin pills wrapped up for me at Christmas. However, there was one that stands out. It was a car crash kit.

It had a disposable camera for recording the scene, a form for both parties to fill out, a tape measure for measuring stuff, and some chalk, for what I assume, was for marking out where the bodies landed or something. I’m not sure. ~ X-cessiveDreamer

My wife ruined my Christmas. I don’t know if I’m ever going to be able to look at her the same. She called the simple ring my daughter received from her boyfriend “a trash ring” because she wasn’t wearing the nearly $700 class ring we had just given her.

I have never been so disgusted with my wife. It’s a whole new side to her. ~ bluurd

It was Christmas morning and we’re all sitting around the tree with my family and girlfriend at the time. We are all opening presents and I open one from my girlfriend. I unwrap the box and inside I find a flat-billed baseball hat. Strange—I neither wear hats nor give a hoot about the team whose logo was plastered on the front, let alone the sport.So, I pull it out and hold it up so everyone [but mainly my girlfriend] could see. All the adults give a quizzical look. Even my little sister makes a “huh?” face. So, I say something like, “Uh thanks, hon.” Her face drains of color. She says “Oops, that was for someone else, I must have brought it inside by accident.”

She then snatches it out of my hands. I hold out the card that was attached to the wrapping: “Hey baby, love ya lots. Merry Christmas.” She was cheating. There were tickets to some big upcoming game tucked inside the hat too. Needless to say, it was awfully embarrassing to have to essentially break up with your girlfriend in front of your family on Christmas morning via what you thought was a gift. ~ totes-muh-gotes

When I was 12, I bought myself a Kindle. My sister and I spent an entire summer working for our grandpa and stepdad to save up for them. We each spent about $200. My mom got all three of my brothers Kindles for Christmas, and I got some clothes from Old Navy. I was livid. When I talked to my mom about it, she told me that my sister and I had been excluding our brothers from hanging out while we played video games, and it was unfair.

She never apologized or saw anything wrong with what she did. I honestly still haven’t forgiven her, almost a decade later. ~ BlueButterflies139

A few years ago, my aunt gave me a rock for Christmas. She gave presents to me and my two older cousins and said it’s time for the big girls to open their gifts. She made my cousins go first and they got scarves. Then I opened my present…and pulled a rock out of the package. I looked up, waiting for her to laugh, and she said, “Isn’t it wonderful??”

So I had to be like “Yeah, I loooove it!!” She then told me that she had dug it out of her garden the previous summer and she knew that I would think it is sooo cool. The following year, she gave me acorn tops because “some people know how to use them to whistle and I don’t know how to show you or explain, but I’m sure you can figure it out.” She is a tad eccentric. Both were pretty terrible presents.
~ gennieb7

I had worked a shift at the hospital on Christmas Eve and was trying my best to get to my family’s house about two hours away before dinner. My brakes on my car just were not working right. It was snowing like crazy, and I was losing hope. I saw the mechanic was still open, so I drove in and told him what was going on.

Half an hour or so later, he came out and told me what was wrong. And that wasn’t all: He had already gone ahead and fixed it. I asked him what I owed him for the work. He told me to just get home to my family safe and have a merry Christmas. I felt like I was in a Hallmark movie. It is now the only place I will take my car. ~ Goofball412a

Didn’t Get Me My Tamagotchi

When the Tamagotchi craze was in full swing, my siblings and I asked for one. My sisters both got one, and I got a jacket because mine was torn up and small.

So, I asked my dad why I didn’t get one and if Santa thought I had done something terrible that year. He told me I was too old for Santa and needed to learn that life isn’t fair. I was eight, and my sisters were seven and five. From that point forward, I only ever received clothing. ~ dariusz2k

I found out that my wife was cheating on me at 11:30 PM Christmas Eve while we were at her parents’ house.

I packed up my stuff, walked right by her family—who, to be fair, didn’t know what was going on—and drove 6 hours in a crazy rainstorm to my parents’ house. So there’s that. I know it’s going to be okay, but…not a good Christmas. ~ NateGrille

Last Christmas Eve, my mom passed on at the age of 71. Then, on New Year’s Eve, my dad had a heart attack and lost his life at the age of 78. Needless to say, this completely ruined the entire holiday season for me and my family.

To make matters even worse, our entire family got sick from the catering that the church provided at the funeral service. It seems a bit comical now, but it wasn’t the least bit funny at the time… ~ serouslydoe

This Christmas Ended Up Being Trash

Growing up, when I was a kid, my grandparents always gave us weird gifts. They learned one thing about us and locked on to it so hard that it became a theme. For example, my sister said once she liked giraffes, so every year, they got her something cheesy with a giraffe on it. Despite our best efforts to thank them and be grateful for their presents, they could always tell we didn’t like what they got us. It made them sad every year, and we felt terrible about it. One Thanksgiving, when my sister and I were around ten years old, we were at their house playing. We accidentally found what they had intended to give us for the next Christmas. They were these two beautiful handmade dollhouses. We loved them and were excited to get them eventually. We were also happy we didn’t have to pretend to like the gifts. So, my sister and I concocted the most brilliant plan that a 10-year-old could. When the conversation with family about what we wanted for Christmas came up, we said we really wanted dollhouses. My younger sister even told Santa that was what she wanted, and we were so happy that our grandparents would be able to get us exactly what we wanted! There was no way they saw through our genius scheme.

Christmas arrived, and our grandparents went to another room to get our presents. We prepared ourselves to be elated, even practiced being surprised. We had no idea what we were in for. Instead of the dollhouses, they brought us out two new trash cans. At that point, we didn’t have to pretend to be surprised anymore. Our grandma smiled at us and let us know that they knew we snooped and found the presents. They said the trash cans were a more fitting present for the “garbage granddaughters that you are.” Needless to say, after that, we had very little contact with them. ~ Devornine

Taking It For Granted

My cousin, who bought Chick-fil-A to holiday dinner just so he wouldn’t have to eat our homemade meals, announced upon arriving that, actually, he wasn’t helping with anything. No cleaning, cooking, babysitting, nothing. He then tried to use substances all day on Christmas Eve and was drinking before noon by himself on that same day.

When I told him no Christmas shenanigans and to please clean up his dishes, he screamed in my face.
~ VoteGeriatric2020

Love Is A Special Medicine

We were hosting a young lady my wife worked with, as well as her boyfriend. Halfway through dinner and somehow the discussion got to how she and her brother “once got super trashed on Robitussin, and next thing you know we… Uh… Yeah, that was really a weird time.”

Everyone just got really quiet as we were trying to decide how to fill that one in and where to go with it. ~ ValleyNerd