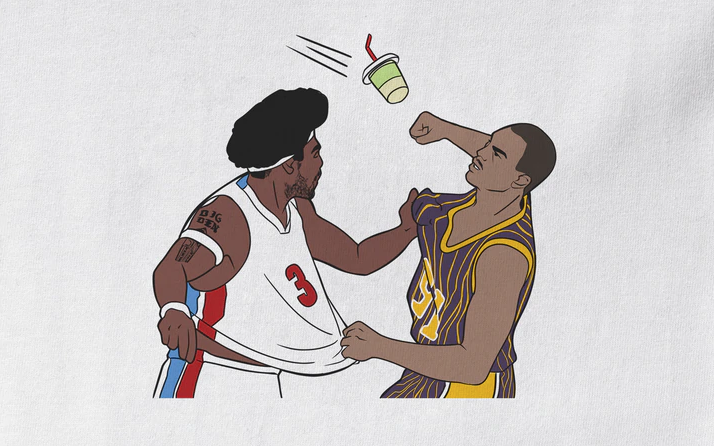 Professional basketball offers plenty of entertainment value. It features some of the world’s most talented athletes displaying an array of high-flying dunks, pinpoint passes, and deadeye shooting. But for what it boasts in speed and grace, some say it lacks in toughness. Maybe that’s true most of the time, but once in a while, the NBA offers up a good old-fashioned brawl. And that’s really what Americans are watching sports for anyway, isn’t it? The chance that all order will break down and something will go terribly wrong? It may not happen often on the hardwood, but when it does, look out. These are the top five fights in NBA history.

For the second time on this list, a fight makes an appearance not so much because of the people involved, but because the amazing thing that happened to Jeff Van Gundy as a result. When a fight broke out between former teammates and respective behemoths Alonzo Mourning and Larry Johnson, naturally Jeff Van Gundy’s reaction as a small, balding coach who vaguely resembles the turtle from Rocko’s Modern Life, was to thrust himself into the middle of it in hopes of breaking it up. Instead, what ensued was one of the greatest visuals in NBA fight history: Jeff Van Gundy desperately clinging onto Alonzo Mourning’s leg, while the fight continued unfettered by his puny presence.

Anytime two legends of the game like Larry Bird and Dr. J get into a tussle, you know it’s going to be a big deal. But the MVP’s of this fight were actually Moses Malone and Charles Barkley; Dr. J’s Sixer teammates who craftily held Bird back, letting Erving unload a few unopposed rounds on him. By shackling Larry’s arms and neck, Malone and Barkley effectively made the Celtic Hall of Famer into a heavy bag for Dr. J to give the old once over, and Dr. J obliged. Say what you will about their tactics, but you’ve got to admire the fact that whether they were running the fast break or brutally assaulting an opponent, these guys truly worked as a team.

The classic dust-up between Shaquille O’Neal and Charles Barkley earns the number three spot by featuring two of the largest children you’ll ever see. In true school yard fashion this fight starts with a little shove (from Shaq), escalates when one kid throws the ball at the other’s head (Sir Charles), and ends with zero punches landed and the two of them rolling around on the floor. In the end neither guy was hurt, but both of their shirts got pretty stretched out, so that’s something. And you can bet your life that in the cafeteria the next day, they were both bragging about having totally kicked the other guy’s butt.

You may not remember this fight for the guys who were in it, but you’ll certainly recall the guy who wasn’t involved but was still somehow the only real victim. Yes, this was the scuffle where Marcus Camby threw an absolute haymaker at Danny Ferry, only he missed Ferry entirely and unintentionally blasted his own coach, the ever-innocent Jeff Van Gundy, right in the face. Although it was an accident, it still ended in a bloody nose for Van Gundy and an assurance that Camby would go down in league history as the only guy to sucker punch his own coach (though that doesn’t include choking — we haven’t forgotten you, Latrell Sprewell).

Plain and simple, November 19, 2004, Indiana Pacers at Detroit Pistons was undeniably the Citizen Kane of NBA brawls. Compared to what is known simply as the “Malice in the Palace,” all the other fights in NBA history just look like ants squabbling over a discarded Cheeto. It was essentially the perfect recipe: Take two blue collar teams that are fresh off a heated playoff series, add the unbalanced Rasheed Wallace, the unpredictable Stephen Jackson, and the impossible nut-bar that is Ron Artest, sprinkle in a hint of lunatic fans, and watch the magic happen. And let’s be clear, unless Metta World Peace hauls off and dropkicks Jack Nicholson at a Lakers’ game, the Malice in the Palace will NEVER be bested.

And those, ladies and gents, are the five finest fights the Association can lay claim to. Sure, there were some gems left off like the time Bill Laimbeer and the Bad Boy Pistons threw down with the Golden Girls at a charity event (we couldn’t find any video evidence of that one, but we assume it happened. Those dudes fought everyone), but they can’t all be winners.

And if you really think we missed out on some classic brawls, throw together a list of your own, but just know that we might get Moses Malone and Charles Barkley to hold your list down while our list beats the crap out of it.