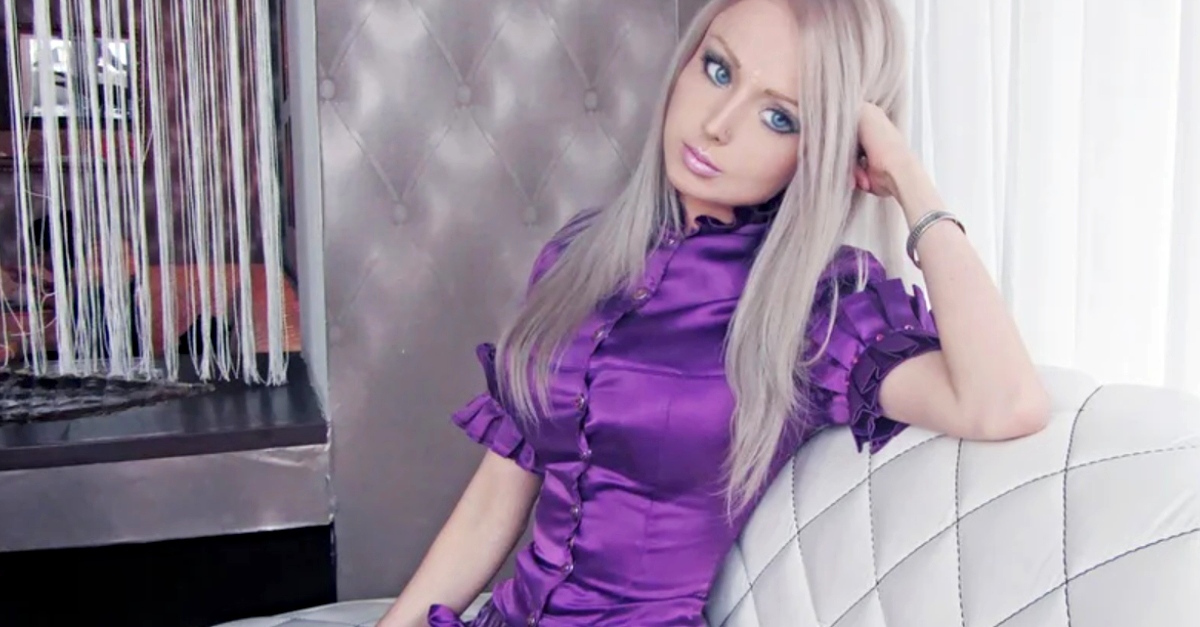 All she wanted was to have the perfect look, but over the years, she faced her fair share of criticism and pressure. She once was a model and because of this, she was desired by many, but these days, people are wondering if she’s gone too far.

They never understood how much time and effort it took to be who she was. They never seemed to see her point of view. She was living her life the way that she wanted to, but everyone else had an opinion on it.

In 1985, Valeria Lukyanova was born in Tiraspol, a former Moldovian city which once was a part of the Soviet Union. Her mother worked for the military and her father was a construction worker. For her entire early life, she constantly moved between Moscow and Ukraine.

Everyone around her had always known that she was a beautiful woman with exquisite features. In 2007, she started entering into beauty contests, and she always seemed to win them. But shortly after this, she began experimenting with her looks in a controversial way.

During the course of her life, Valeria made sure to prove that she was more than just a pretty face. But did you know that she has a bachelor’s degree in architecture from the Odesa State Academy of Constructions and Architecture?

But that isn’t all she’s accomplished. She is also a talented opera singer, actress, author, and instructor for a form of spiritualism known as Out-of-Body Travel. But she is most famous for something completely different.

She Shot To Fame

She first shot to fame when she started posting pictures of her unusual looks online. She has a massive fan base, but not all of her publicity has been positive.

Valeria has said that she sees her various transformations and augmentations as body-affirming attributes, but many people have criticized her for this. She has faced some nasty and harsh comments and opinions online.

People have started countless rumors about her unusual physical appearance and dimensions. Despite these speculations, she has always maintained that her look is completely natural.

At first, her unique looks gained her fame, fortune, and fans. But as time passed, the rumors only ever became more vicious and dangerous.

Her name has been all over the media where they have accused her of going to drastic measures to modify her face and body to achieve the look that made her famous.

But most of her negative attention has come from online comments and cyberbullying. But soon enough, the dangers that came with her unique kind of fame became all too real for Valeria.

By the time 2014 rolled around, the hateful comments and cyberbullying had turned into anonymous threats. Valeria has revealed that this culminated in her being attacked and injured by two men. This attack was physical.

She didn’t give clear details, and it was never confirmed if this was the result of crazed fans or perhaps people that were against her activities and decided to act in violence. But either way, opposition to her life has never gone away.

Many have accused her of using plastic surgery to alter her physical appearance. But they also believed that she uses photoshop to alter her online images.

Some reputable news sources have even accused the model of using photo editing software to manipulate her photoshoots. She has denied these claims, but the rumors are still only growing.

Because of her unique look and the plethora of ways she achieves it, she has gained international fame and success. Her fans love her look because of the character she often channels through it.

But her haters are critical and believe that she goes to extreme lengths to gain publicity and fame for her look. But why is she famous?

Many people believe that her look is reminiscent of an iconic beauty standard. She has admitted to striving for her look, but she disagrees with the methods used to achieve it.

The famous look she is going for is that of a Barbie Doll. It has always been an iconic standard of beauty to generations of little girls, but many women like Valeria have been heavily criticized for trying to reach it.

What inspired Valeria’s reputation as the “Human Barbie” is the fact that her features always appear to resemble a doll. With porcelain-smooth skin and an almost plastic appearance at times, some of her pictures look indistinguishable from the doll’s.

In addition, Valeria also has a tiny waist and a large chest, giving her the exact figure that traditional Barbie dolls are synonymous with. The question was, how did she get it?

Valeria has consistently maintained that she had only ever had breast augmentation surgery. When it comes to her seemingly perfect features, she insists that the look is achieved by artful makeup and flattering photography.

As for her waist, many people suggest that she has gone to extreme lengths such as having ribs removed and other surgeries to achieve it. Valeria vehemently denies this and states that her pristine figure is the result of hours of exercise and a strict diet.

In a world dominated by social media, fake perceptions, and filters, many people are turning to surgical and other cosmetic means in the quest for beauty. In this debate, people like Valeria are constantly criticized and blamed for being role models in a negative way.

Barbie dolls have always inspired standards of beauty that are often unattainable and unrealistic. While the toy brand has diversified a lot to match societal changes in opinion, classical beauty standards still dominate the minds of many young people.

There have been many women over the years who have used the Barbie doll image as a standard of perfection. With some going to extremes, this was usually a female-orientated craze in the past.

While Valeria might have thought she was unique, her fame now is mostly due to how successful she has been with her own transformation. Far from being the only one, now there are now even men that have joined the doll craze.

Justin Jedlica is a Slovak-American who attained both fame and infamy for pursuing a similar transformation. While Valeria can lay claim to the real-life Barbie crown, Justin is certainly a top contender for the real-life Ken doll.

While these kinds of pseudo-taboo trends become more popular, it seems the world is destined for more colorful characters. With surgical enhancements developing more extreme methods for augmentation, only time will tell whether people like Valeria and Justin take things too far in their quest for the perfect look.