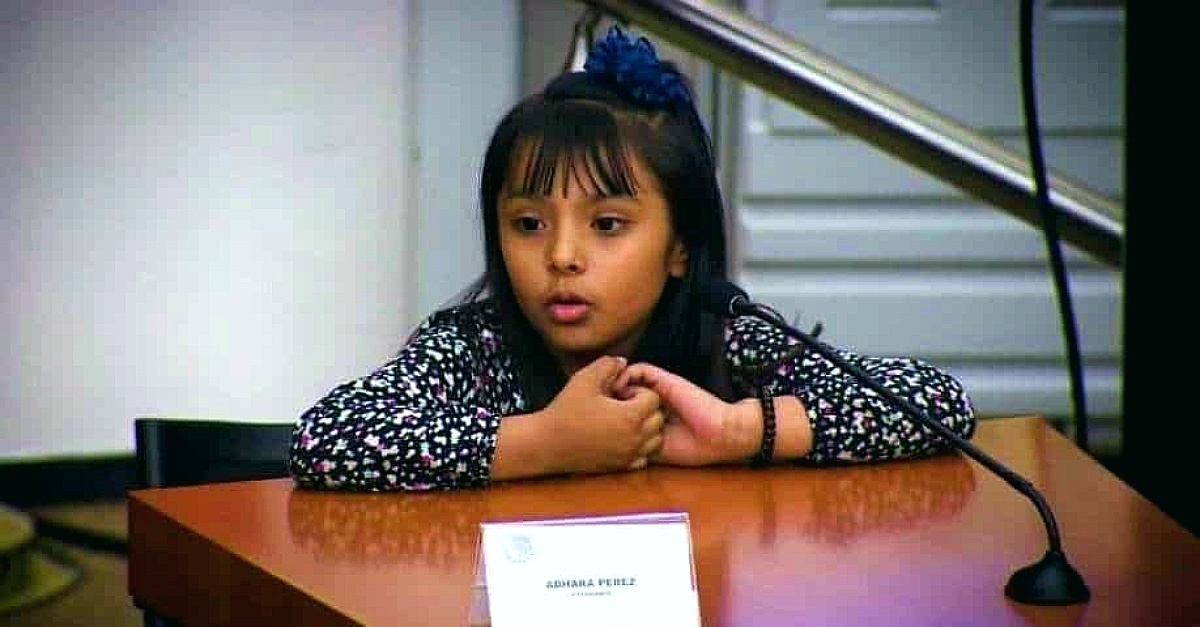 She threw the bottle of pills against the wall, ripped up the angry note from the teacher and shoved it in her daughter’s backpack.

She knew beyond any shadow of a doubt that her daughter wasn’t a troublemaker. Little did she know that a simple computer test was going to show everyone just how wrong they were.

Life wasn’t easy for Nallely Sánchez and her family.

Living in a low-income area didn’t give them many choices when it came to employment or schools. More than anything, however, she was worried about her daughter Adhara. It was at three years old when she and her husband spotted something odd.

Adhara was becoming very peculiar in how she did things. At only two years old, she could form full sentences together and she was obsessed with puzzles.

But upon her third birthday, Nallely noticed that something seemed off. She was no longer communicating with her the way she was told to expect. And her fixation on certain tasks became more intense.

As a mother, Nallely noticed everything about her baby girl.

She would stay up to the wee hours of the morning fretting about the little differences in behavior compared to the other kids Adhara’s age. It wasn’t until they asked a doctor, did the truth finally come out. Her little girl had Asperger’s syndrome.

Nallely sat in the living room, holding her baby girl, and trying not to cry.

It wasn’t the diagnosis that she feared. It was how the rest of the world was going to treat Adhara. Starting school was just as bad as she had foreseen. Nearly every day, kids would call her cruel names. And by the time she came home, Adhara had puffy, red eyes from crying so much.

Nallely and her husband watched in horror as their girl slipped into a deep depression – and it was all because of what was happening in school.

It was just so wrong. She was only 7 years old and already hating life. Time after time, teachers would complain that she wasn’t paying attention in class, giving her angry notes to take home and show her parents. But instead of disciplining her, they reacted differently.

The angry notes only made Nallely and her husband sick to their stomachs. It felt like who the teacher was writing about was not their daughter at all but someone completely different.

Then another huge hurdle came their way when Adhara’s teacher pointed out yet another set of unexpected actions.

Nearly every day, Adhara would fall asleep in class.

Nallely would ask why, but her daughter would just shrug. No matter how many times Nallely and her husband quizzed their daughter on her behavior, she wouldn’t talk. Instead, she stayed in her room, avoiding them out of fear she’d get into trouble. It was almost like she was afraid to say anything. Left with no choice, Nallely devised a plan.

The results weren’t what they expected.

Nallely and her husband watched the recording of their daughter in class with the look of confusion on their faces.

It started with their daughter fidgeting and swinging her feet back and forth at her desk. But it was about to get far, far more interesting.

Next was staring off into space and only snapping back to reality when the teacher would angrily tell her to pay attention.

It seemed the medication the doctor had prescribed to treat her Asperger’s syndrome wasn’t working – but the pharmacist at their local CVS said that there was no reason it shouldn’t be working. Something was very wrong.

Nallely pulled her daughter into her lap and looked over the video again. This time, she tried to get Adhara to explain what she was doing. But it wasn’t working.

Adhara looked at the video and looked down. She seemed unwilling to pay attention until a lesson on numbers popped up. That’s when something finally sparked.

Adhara sighed and started to trace her fingers along her mother’s arm like she was writing something.

“What are you doing?” she asked. Adhara shrugged again. “Numbers”, she said. Maybe her daughter really did know what was going on at school, but she just wasn’t being taught in a way that she could process. Suddenly, Nallely had an idea.

She told Adhara to stay put as she ran to the study. She grabbed a piece of paper and pen and put Adhara back on her lap. She placed the paper and pen in front of Adhara and asked her to show her.

The moment she put the pen into her little girl’s hands, the shocking truth finally came out.

These weren’t the numbers the teacher had been writing on the board.

Nallely quickly pulled out her laptop and picked the first site that appeared from her query; kids online math test. Nallely watched as Adhara’s interest immediately piqued. Her little hands grabbed the mouse and keyboard.

Curious, she went back to the search bar once more and typed ‘hard online math test’.

Calling For A Witness

Adhara had become visibly more enthusiastic as she stared at the screen. Nallely hadn’t seen her so interested in something in a long while. The math problems were hard and way above Nallely’s ability.

Her daughter began typing at speed. Nallely yelled for her husband.

Nallely looked almost scared as her husband approached. With wide eyes, she turned her head to her head and the screen, and said, “look at this”.

The couple watched in complete amazement as their daughter appeared to solve math equations far beyond their comprehension. What was happening?

When the final result popped onto the screen, Nallely couldn’t believe her eyes.

Her husband was also left in shock. “Hold on a minute”, he said. He grabbed the mouse and typed in one final experiment into the search bar; ‘online IQ test’. He opened the page. “Here, honey”, he said to Adhara. “Try this”.

It soon became clear that Adhara was no ordinary girl.

Immediately, they speculated that their daughter wasn’t misbehaving or falling asleep because she was bad or because of her syndrome. She was bored because her IQ was really high! But first, they needed to prove it. They made her take a proper test to get a professional opinion.

Adhara sat at the testing desk, flipping through the pages like someone famished for a challenge.

Even the testers that were overseeing everything looked on with wide eyes and stunned expressions. But it was the final number that would blow everyone away. Adhara had an IQ of 162. But what did that mean compared to other gifted people?

Well, Albert Einstein and Stephen Hawking both had an IQ of 160.

Their little girl was a genius! She didn’t need medication or a stricter hand. She just needed something to match how smart she was. It wasn’t long until the world found out and the Sánchez family were in the spotlight.

Adhara soared through high school by the time she turned 8.

It was like life had waved a magic wand and made the depression disappear. Nallely finally could cry tears of joy instead of misery on behalf of her girl’s plight. But now there was also an immense sense of pride as Adhara tackled TWO degrees at the same time – one in industrial engineering in mathematics and one in systems engineering. But what was the girl’s end goal?

Looking To The Stars

While some kids dream of being an astronaut, and then move on to other career ideas, Adhara had the brains and passion to become one.

Universities reach out and offered her scholarships, countries invited her to visit their science and space programs. She even gave a TED talk about her plans for future space study.

Going To Make A Difference

Nallely and her husband watched with beaming smiles as their little girl stood on stage and talked about black holes, mirror theory, and traveling to distant planets. She also revealed her plans for coming inventions, including a smart watch to help parents with children with special needs.

And to think, the first school was angry because she wouldn’t answer what 5×5 was.