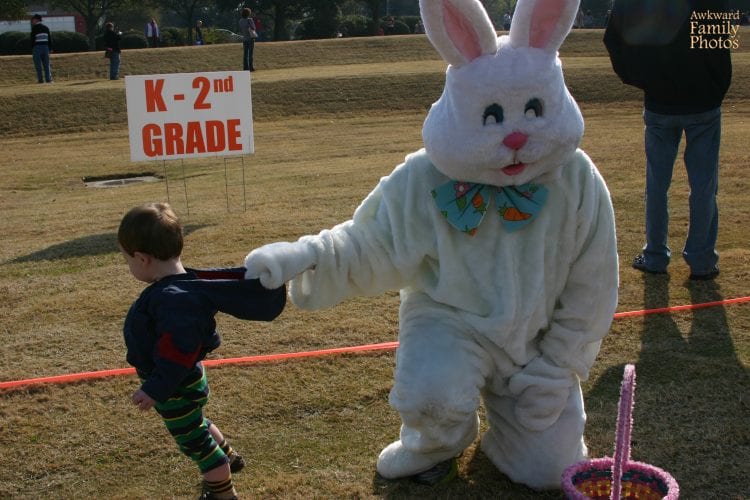 We try to live life with no regrets, but when we look through old family photo albums and see some of the things our parents put us through, we regret not saying no. Take a look at the funny Easter photos below and be grateful your parents didn’t do this to you!

Here are the top easter photos that went wrong:

Those eyes! That creepy stare!

He looks as though he’s about to eat her — or offer her up as a sacrifice. This is not a funny Easter photo; it’s creepy AF!

If you didn’t tell us this was an Easter photo, we’d never have known.

We thought #40’s slanted eyes were creepy, but those googly eyes are just as bad!

Whoever designed these costumes seriously failed.

We’d be screaming too if this large-mouthed creature had his lips this close to our heads!

This guy looks like he’s been on a diet of nothing but Jack and Coke for the past week, sans sleep (or shower).

How is this a good costume?

Boredom alert! There’s nothing wrong with this Easter bunny. He looks like a tenured professor.

However, sometimes you’re just too old for pics with the Easter Bunny or Santa! Their faces say it all.

Continuing the theme of “too old to be taking photos with the Easter bunny.”

Plus, why is this bunny sitting on the man’s lap?

Thank goodness this child wasn’t introduced to one of the aforementioned questionable Easter Bunnies.

If she freaks out over this adorable baby bunny, we don’t know if she’d ever get over the shock of one of the creepy ones!

At least the kid doesn’t seem to mind!

His eyes remind us of vintage pilot’s goggles, but that blank expression and one finger hold on the child just leaves us confused.

Again, who was designing these costumes?!

No one runs from the Easter Bunny.

At least this one’s friendly looking!

But perhaps when you’re a baby, everything is scary!

He was so close to being a nice, normal bunny!

Until we noticed his pants. Did he put them on backward?

That kid must be blocking this memory out.

With his crooked eyes, grimacing smile and dirty attire, this bunny looks like he’s been living on the streets!

Or in a dumpster!

Props to this bunny for being clean and sporting a cute jacket but he looks bored to death!

The baby looks so calm though.

We wonder if this kid’s grandma tried to make the Easter bunny costume.

With those crooked ears, menacing brows, weird mustache and “O” face, this is one funny Easter bunny!

Props to this she-bunny. We love her big eyes and her lashes, and she looks like she’s trying!

Unfortunately, the kid just isn’t having it.

Props for another female bunny but she’s a bit DIY.

Not that we don’t love DIY trends.

There are several bunnies here that haunt our dreams and this is certainly one of them with those creepy red eyes!

When his original plan of serving as the official mall Easter bunny failed, he followed through with Plan B: being the Petsmart Easter bunny.

We won’t judge too harshly though — we’d rather sit with these happy pups than crying kids!

Is it just us or is this Easter Bunny’s mouth looking a little too red?

This bunny’s throwing shade with that side eye but the kid doesn’t seem to mind!

16.) The Needs an Orthodontist (and More) Bunny

This funny Easter bunny looks like he needs some Invisalign stat!

The Easter bunny doesn’t even look like a bunny!

We appreciate the effort here: the pink getup, the pink tutu collar, the basket of goodies.

But that face! Still a bit on the creepy side.

At first, we just thought there was a bit too much camo going on with the orange bunny and the orange background, but then we saw that balloon and wish there had been better camo!

Or better yet, no balloon at all.

We don’t know what the intention was with this funny Easter bunny.

Bonus points for at least having a clean costume, but what is up with those lashes and whiskers?

Maybe we’re just jealous because we grew up in cities where it wasn’t possible for the Easter bunny to arrive on horseback, but you’ve got to admit, it’s still kind of weird.

What’s next, Santa riding in on horseback as well?

Is it just us, or does that mask look like he’s about to rob a bank?!

This little girl is a bit skeptical of this funny Easter bunny and we don’t blame him.

With those crooked ears, crooked eyes and off-white dirty attire, we’re skeptical too!

Maybe it’s the eyes or perhaps it’s that blood-red mouth.

We can practically hear his maniacal laugh.

It’s not just us — Team Jimmy Joe thought so as well.

This bunny looks like he had one too many margaritas for lunch!

Or he is hungover from the night before.

This guy looks as though he smoked a bit of you-know-what before going to work.

The baby is so innoncent.

For once, we won’t fault the bunny.

He looks sweet, the kids just weren’t having any of it!

We’ve seen a few pink sinister-looking bunnies so far so this one isn’t as scary.

But what’s up with that lamb?!

3.) The Reason These Kids Are in Therapy

Once again, we don’t have many regrets, but the ones we do have usually revolve around not saying no to terrible ideas.

We’re sure these kids understand.

If he’s not in prison yet, he looks as though he’s going soon.

He will haunt your nightmares.

The only thing worse than “dad jokes” are grandpa jokes.

It is the only rationale we can think of behind this funny Easter photo!

Want more Easter fun? Click the next button to take our Easter Quiz to see how much you really know about the holiday!