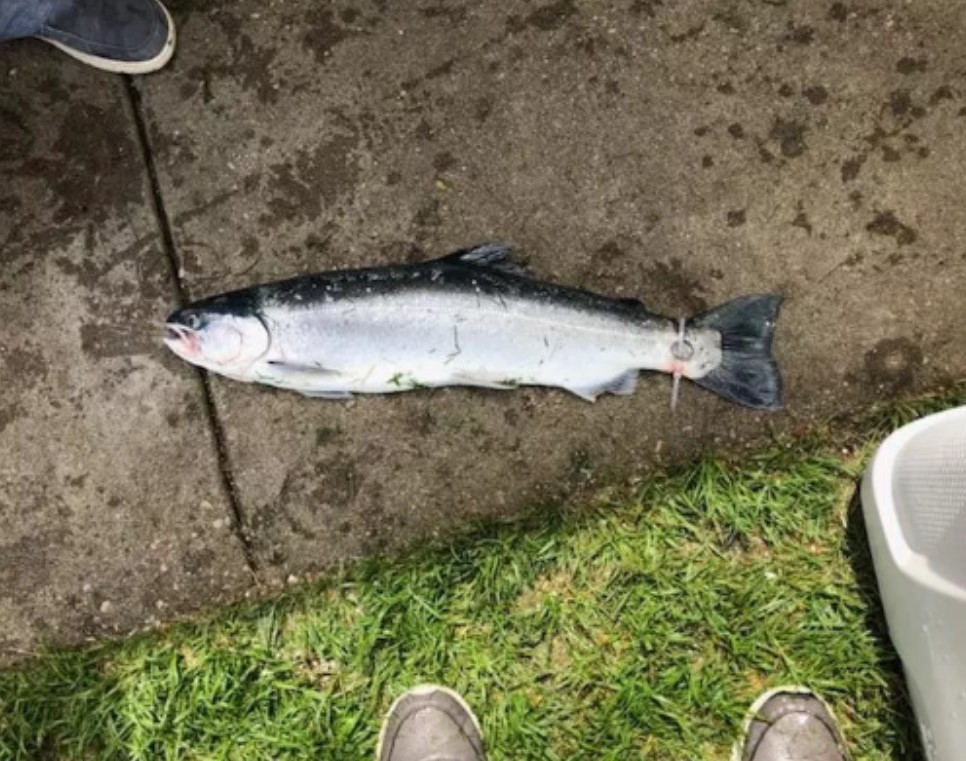 During a day of competition fishing on the shores of Lake Michigan, a group of excited fisherman reeled in an unexpected catch.

The fish seemed pretty average, except for one remarkable difference which fuelled speculation on how this peculiar sight even came to be.

Not Big, Just One Of A Kind

A group of friends; Jim Nelligan, Bob Nichols, and John Massard were fishing in Lake Michigan when suddenly Joe landed a middle-sized steelhead trout. It wasn’t the biggest fish in the pond, but it was definitely the catch of the day.

When they took it from the water they found it to have something no other fish had.

Attached snugly to the base of the fish’s tail was a silver wedding ring secured with a zip tie. “So, we caught this steelhead today,” Jim tells.

“Someone attached their wedding ring to this fish and we caught it. Wonder if it was a divorce or death, but a crazy story!”

When they looked closer there was an inscription, “SDH Steel” in the ring which held a single diamond. Their first thought was whether this could have been a tracking device.

It is not uncommon for fisheries biologists to attach tags to some fish to track their movements for research purposes.

Was It Being Tracked?

Jim reportedly said, “When we first saw it we wondered if it was some kind of DNR tag initially, but then we saw it was a wedding ring.”

The men posted their find all over social media as well as reporting it to the local newspaper, which led to the mystery being solved a few days later.

When the old owner of the ring read the story and came forward to tell his side, a story that some would believe and other’s would question.

The story began with a decade long marriage ending in a messy divorce. But that still didn’t explain the fish.

The Story Comes Out

Capt. Jason Rose was in a decade-long marriage which ended four years ago and he finally decided on a poetic way to discard of the symbol of their failed love.

“I am a fishing guide; she was always against me following my dreams and hated how much I fished,” he told the newspaper. But there was more.

“Four years went by since our divorce,” he continued.

“I felt I needed to get rid of that ring but I didn’t want to just toss it to the bottom, pawn it or any of that kind of thing. So I released it the best way I know how.”

“I am convinced that the ring is cursed,” Jason concluded. “My life has been nothing less than great since I released it.” When Jim heard the story he nodded his head.

“That was my first guess, a divorce, but funny that the guy says the ring is cursed,” Jim remarked knowingly.

Because “That ring is cursed. Ever since it came on my boat, I’ve had problems with my Glendinning engine controls, the switch to raise the helm floor to get at the engines broke and the hose at my dock burst. Sheesh!” Jim explains.

“I think we’ll mail it back to him, no return address!”