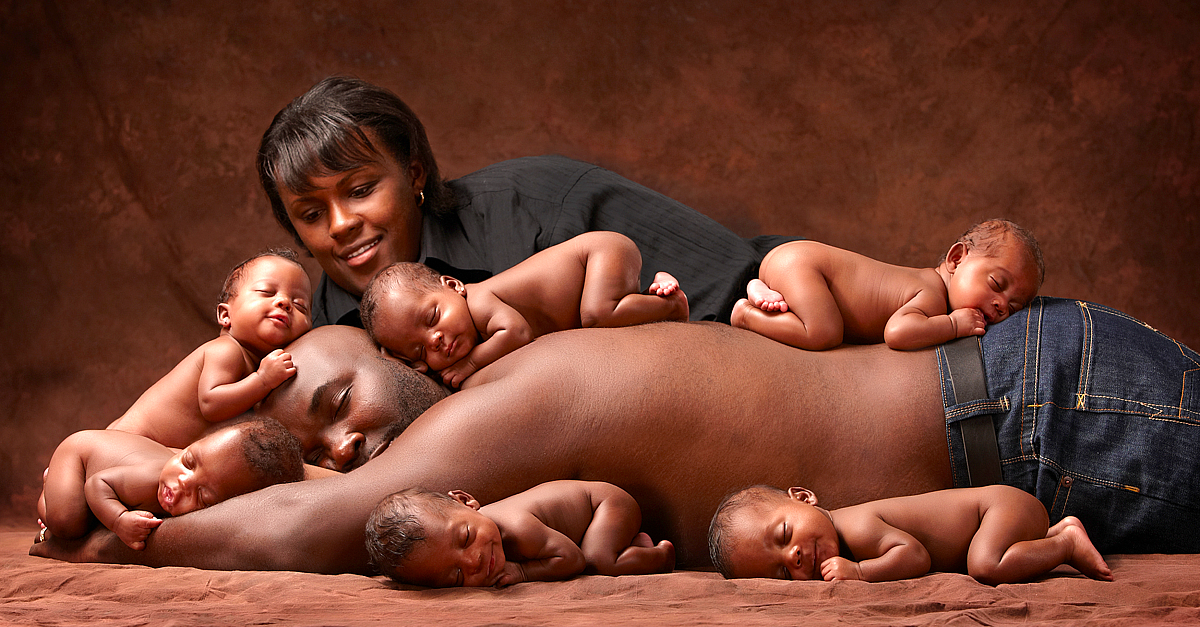 Six years after they took the original picture with their sextuplets, this couple tried to recreate it.  They even hired the same photographer. They didn’t expect anything extraordinary to happen; the only difference would be the time passed. Or so they thought.

However, they failed to notice one detail about the photo. Now, everyone all over the Internet has seen it and everyone’s raving about it.

Rozonno and Mia McGhee’s background wasn’t a bed of roses. They both had been raised in single-parent families, and, growing up, there wasn’t a lot of harmony in their households.

But in 2010, the couple hit the news when they shared an endearing family picture and it went viral. It featured all of their sextuplets: Elijah, Issac, Josiah, Madison, Olivia, and Rozonno Jr. But that wasn’t the end of it.

Their story was that of a couple that was just meant to be. They were high school sweethearts: one day, they had just bumped into each other and fell in love right on the spot.

Rozonno used to see Mia strolling through hallway daily, always carrying her books. Right from the moment he saw her, he knew he wanted her to be his. And that’s where it all started.

They got married really young: none of them had even turned 20. But they just were convinced that their main goal in life was to start a big family.

Their greatest desire was to bring as many children to this world as they could, and to give them a better upbringing than those they had. But would they manage to do so at sucha  young age and with all their baggage?

At the beginning, they had problems. No matter how hard they tried, they didn’t seem to be able to conceive. It took them years of trying and trying with different methods and approaches.

And when Mia finally became pregnant with two twins, she had a miscarriage. The young couple was heartbroken, but they didn’t give up.

And after a while, they were hit with some good news: Mia was pregnant of sextuplets, nothing more and nothing less! They were a bit concerned about the work and effort raising six children would take; but they also saw it as a blessing. At the end of the day, that was exactly what they had been wishing for.

And in 2010, the sextuplets were born. Shortly after Mia gave birth, the couple decided that it would be a fun and cute thing to do taking a picture with all of them. Little did they know that this idea would end up changing their lives.

Shortly after Mia shared the image on social media, it went viral. Even though she only wanted her relatives and friends to see it, it soon made its way into huge Facebook pages.

And that’s when a group of producers related to The Oprah Winfrey Show saw it. The couple was then invited to go to the show and talk about it, as well about their parenting experiences. But they would soon see that there was a catch to all the fame and notoriety.

Their viral status really struck the couple as something unexpected. Suddenly, they were recognized almost everywhere they went: servers, cashiers, and people on the street would tell them they had seen them on TV. Sometimes, they even gave them gifts to help them take care of their six kids.

But there was a question in the air: would that fame be good for the family in the long run? Would it have some sort of influence over the children?

Needless to say, the couple had enough on their plate raising the sextuplets. Their viral status had some perks to it; for example, they got paid for their appearance on The Oprah Winfrey Show, which allowed them to get a bigger house that was a better fit for a family of eight.

But still, taking care of the sextuples was a lot of work. There were endless diaper-changing sessions, plenty of sleepless nights and such. Would they be able to make it through it all?

Six years later, things were a little bit easier. The sextuplets had grown up to be healthy kids. On their sixth birthday, the family decided to repeat the same picture that had made them famous.

They contacted the same photographer and asked him if he would like to repeat the photo. He was delighted to hear back from the family, and agreed instantly. But he had a confession to make about the first picture. And when they heard it, Rozonno and Mia couldn’t help but wonder how could they fail to notice it the first time.

The photographer admitted something people have been trying to point out several times. He actually used Photoshop in the original picture to get all six youngsters to pose at the same time. It couldn’t be done so perfectly after all.

Meanwhile, the children have all been given smart new clothes in the second edition. Killian, the photographer, told ABC News that he had great fun working with the family for a second time and even praised the youngsters for their cuteness during the shoot. But their journey wouldn’t end there.

Many brands and people reached out to help the family with toys and supplies. The family was very grateful.

But it became too much. The time came when the couple was overwhelmed by the generosity of others. They got to the point where they had to tell everybody that they could do just fine from then on.

Mia left her job to spend more time at home taking care of the sextuplets. Meanwhile, her husband decided to make other changes by setting up his own carpet-cleaning business.

The couple also began to take advantage of their newfound fame and decided to sign up for a reality TV show based on their lives. Everyone was curious to see how it was to raise six children of the same age.

While the family became a household name, the carpet-cleaning business began to take off. The business meant that the family could move out of town, and the children could attend a better school.

Six years later, the family appeared to have it made. Despite humble beginnings, the McGhees had become celebrities in their own right. It’s hard to imagine that this all somehow began because Mia had shared a family photo on Facebook.

As the kids turned six, the family celebrated another milestone – the launch of their second reality show, Growing Up McGhee. Their fame was paying off once again.

The show follows the family on their adventures as they face childhood and family life dramas together. As for what the future holds for the family, only time will tell.