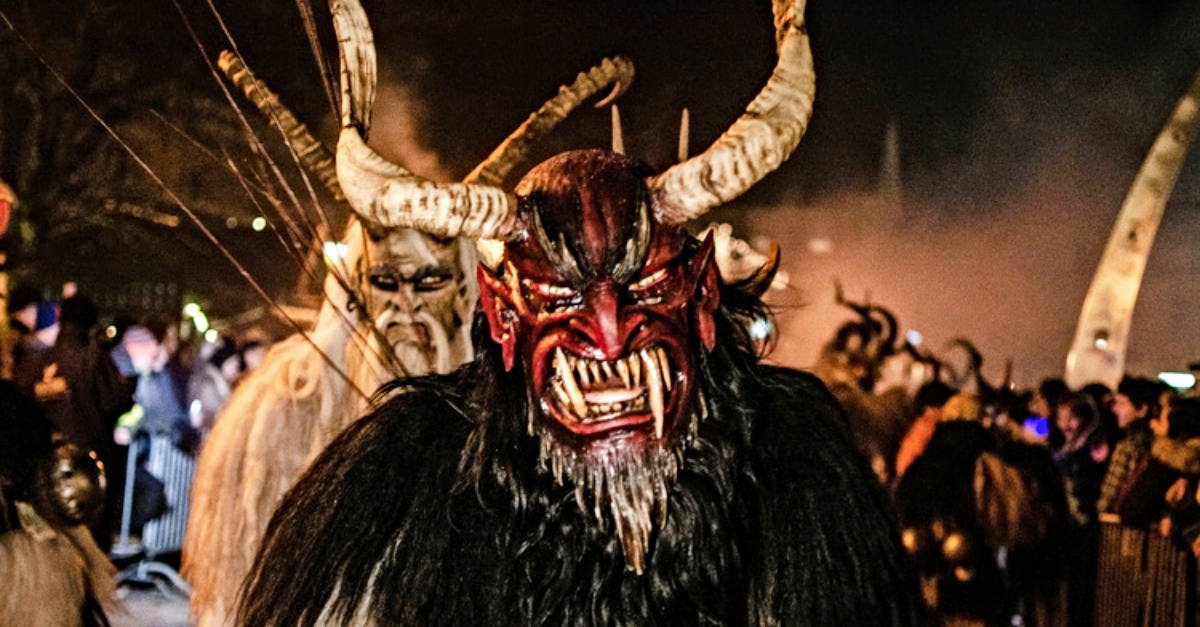 Children are usually buzzing with excitement as Christmas draws near, feeling restless and unable to sleep. They are all too wired up thinking about the presents they will be getting.

However, European kids have different reasons for their sleepless nights around Christmas. They are terrified around Christmas time, dreading a particular figure that visits them.

But other Christmas characters do not invoke such cheer and joy. Their purpose during this time is unlike Santa’s, making nightmarish deliveries instead.

Versions of Santa may vary from place to place, but an overall concept is accepted worldwide. Everyone would have similar, if not identical, descriptions of the jolly character.

This is what makes St. Nick so appealing. Everyone can relate to him, bringing a connection across the globe. We all know that the presents go to all the children who have been well behaved, but what happens to those who have been naughty?

We all know about Santa’s elves, Rudolph, and the rest, but the European kids have heard of an entirely different helper.

The good children may be rewarded with stockings, but there was more to the lump of coal in the naughty kid’s stockings. According to legend, they expected worse.

The European legend tells tails of how naughty children should be wary of facing Santa’s other helper. These legends taught children to behave to avoid this helper visiting them come Christmas time.

Never mind the coal. The children from the west had the privilege of not knowing about this scarier version of Santa’s helper, but these kids have grown up fearing worse punishment than coal.

These legends speak of Santa and his terrifying helper visiting children around the 5th of December. Well-behaved kids would wake up to modest gifts like fruits, chocolate, or nuts.

Santa’s companion would handle the kids who misbehaved by punishing them with birch rods. These were wooden sticks used for beating kids, otherwise referred to as corporal punishment.

St. Nicholas was a reality derived from the Christian era, while the helper we know little of is said to have come from before then. Pre-Christian times held much darker beliefs of figures that were shared all over.

The belief in St. Nicholas and his traditions had stuck by the sixteenth and seventeenth centuries. But places like Austria had their beliefs instilled in other “heathen” entities spoken about in their legends.

The figure has been said to have anthropomorphic characteristics. This means that it has a mixture of human and animal features, and this figure, in particular, has been described as hairy, having cloven hooves for feet and horns.

It’s no surprise that this description makes one think of the biblical angel cast out of heaven. There’s no hiding the fact that this figure has been regarded as demonic.

There are European towns that celebrate this figure during the winter season with parades and festivals. These parades can be associated with Halloween, whereby young men dress up as the particular frightening figure.

But Halloween can only be described as tame when comparing the costumes. These are explicitly designed to do a spectacular job of scaring children.

Some households have gold-painted twigs inside their homes for the children to see all year round, reminders to be good and avoid punishment come Christmas time.

He is depicted differently in other regions as a devil-like being wearing a sack around his waist and chains around his neck and wrist.

After a few turns in Hollywood flicks, this figure has become more popular and well-known to westerners over the years. In fact, even if the descriptions so far haven’t rung a bell yet, chances are you’ve already heard of him before.

Whether you know him as Santa’s lesser-known helper, a demon that terrorizes children, or just a movie character, his name should be familiar by now. So who is this dreaded figure?

He is most commonly known as Krampus and is usually depicted in terrifying ways. A chilling reminder for kids to behave, Krampus was popularized among western audiences through movies such as ‘Krampus’ and ‘A Christmas Horror Story’.

Throughout parts of Austria and other European countries, you can treat yourself to his scary appearances at the famous parades that he features in.

While these parades are usually meant as a spectacle and maybe a few scares, in 2015, the parade went too far. Some of the actors playing the Christmas demon began really beating people with sticks.

As if the scary costumes and horrifying stories weren’t enough, it seems some people take the figure’s origins a bit too seriously.

In fact, in Austria, the parade can sometimes get so terrifying that they require warnings. While most Austrian families likely treat the parade the same way American ones treat Halloween, it’s a different story for outsiders.

Given the influx of Syrian refugees, officials made rounds to such families. The purpose was to warn them about the festival to ensure they were well prepared for how creepy and scary it could get.

Whether you believe scaring children is appropriate might be a contentious issue today. However, parades like the Krampus festivals are still very popular in other cultures. Figures like Krampus may be creepy and not for everyone’s taste, but they remain an integral part of European folklore.

It should be remembered that his inclusion into a holiday that is now traditionally Christian despite his pagan routes proves that the blending of different beliefs and cultures is not a new phenomenon. What’s your take on the Christmas demon?