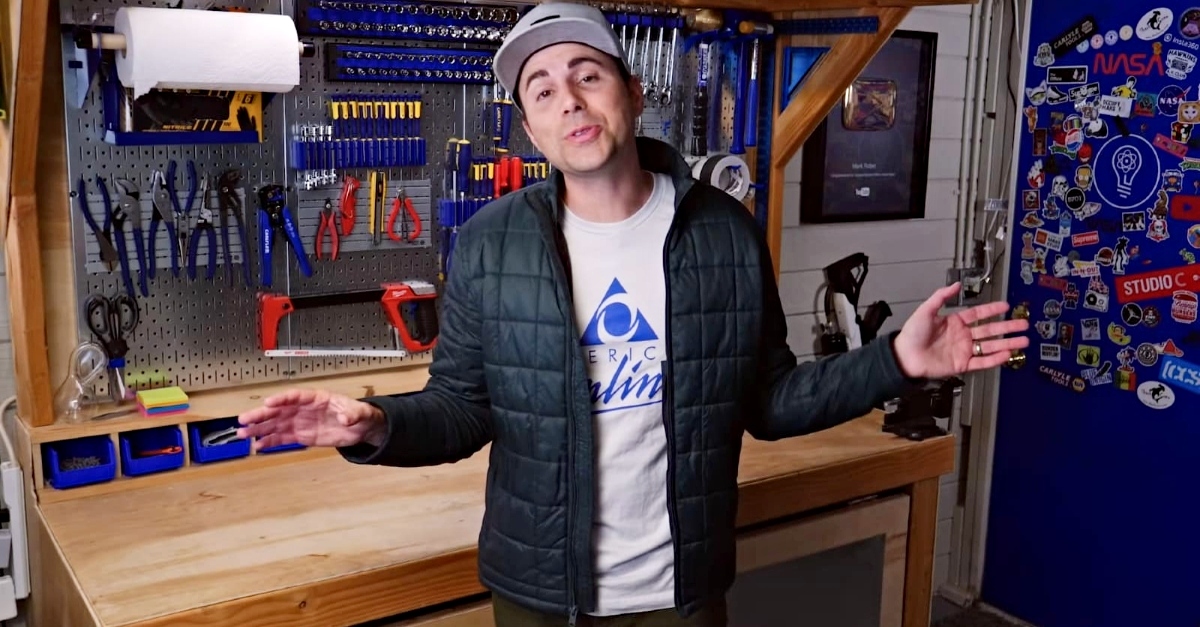 Mark had always been passionate about building things. Ever since he was a kid he loved taking stuff down and putting it back together. As a teenager, he was not ordinary either. And when he got older, his incredible mind would lead him to an awesome career.

The man had proven himself in so many ways. For him, success didn’t mean financial growth but the freedom to design and build whatever he desired. This time, when he began building a special “office”, the end result was jaw-dropping.

In his childhood, Mark had already shown signs of a great mind. As a kid, he’d started his life as an inventor when he first designed and build a pair of goggles that prevented the wearer to avoid crying when chopping onions.

When he got older, Mark’s dreams and goals grew exponentially. Mark had always seemed destined to make it, but his path still managed to surprise everyone around him.

Due to Mark’s obvious attraction toward engineering, his choices were never doubted. Raised in Orange County, California, he would go and obtain a degree in mechanical engineering at Brigham University before getting a master’s degree at the University of California.

Mark’s accomplishments as a student had begun making waves by the time he entered the workforce. Right out of college, the young man landed a dream job for anyone that loved building things.

In 2004, shortly after finishing his first degree, Mark was recruited by NASA. While working as an engineer for the famous organization, Mark had the opportunity to work in their jet-propulsion laboratory.

The young man had worked for NASA for nine years, and seven out of those were spent doing what every kid dreams of – space driving.

Working On The Rover

Mark had spent most of his career at NASA contributing to the Curiosity Rover. The Rover is as big as a regular car, but with a critical difference. The machine was created to be driven on Mars which was pretty amazing.

By 2011, the machine was launched from Cape Canaveral into space. Remarkably, the Rover is still there to this day and is still functional. Having proven himself again, Mark’s goal was to tackle new challenges.

From 2015 to 2018, Mark secretly worked as a mechanical engineer for the giant company Apple Inc. He was an important part of their product design team, and this only helped the young man’s career.

But it would take a few good years before Mark began researching and studying the areas that would eventually change the course of his life and make him famous.

From the time Mark was still with NASA, he began making YouTube videos. The interesting nature of his job, combined with Mark’s colorful personality, made his content reach millions of people.

When he saw the great potential of content creation, Mark took his talents to a new level, and what he came up with surprised everyone.

For The Love Of Science

Mark’s work shows his definitive passion for science and technology. His videos have a fun and charming thing about them, but his true goals were beyond entertaining people.

While showing his process, Mark was very good at teaching and engaging with people, especially the younger audience. He was, therefore, able to spark fascination in science and technology, while teaching people how misunderstood these disciplines are. But mark had also other things that helped him build a great following.

Besides this, Mark is also an advocate for some very important causes. The reason behind some of these was also due to his deep and personal connection to them.

Mark achieved a lot of success as a businessman and engineer through his science-based and Halloween-themed company, and from being a famous content creator. Mark is also a strong advocate for protecting the environment and raising awareness for autism. Mark’s son is autistic so it was only natural that he would his best to help everyone like him.

But among all his endeavors, Mark had remained a serious and ambitious engineer. He is always on a journey to combine science and fun, which would lead him to cause a stir for various reasons.

Mark’s special project appears to be a regular, dusty old office. However, once Mark reveals the truth behind it, one can’t help but think of a legendary character. DC Comic’s character, Bruce Wayne, is a billionaire, philanthropist by day, and of course, the superhero Batman by night.

The character also happens to be a genius inventor. In the Dark Knight movies by Warner Bros. Pictures, Bruce Wayne famously uses an old piano and later a fake office to conceal his secret activities. Now, these concepts have been turned into reality.

In one of his latest YouTube videos uploaded in June 2022, famous Youtuber-Engineer, Mark Rober, revealed his special “office”. What appears to be a regular, slightly old-fashioned office hides something much cooler.

Topped off with secret entryways and hidden catches to open them, Mark reveals that this “office” actually acts as a front to a massive secret laboratory. Once inside, he takes viewers on a virtual tour and shows off its cool features and uses, of which there are many.

The lab features tons of funky and entirely usable gadgets and toys. It functions as a vast warehouse that doubles as Mark’s place to design, build, and experiment on his inventions in a fun and ultra-cool space.

The lab, its gadgets, and Mark’s fun, quirky, and inventive activities in there are the stuff of dreams. It’s clear that for all of Mark Rober’s success, his greatest accomplishment has been his ability to turn his passions and skills into unique, fun, and awesome inventions. That’s not all.

Mark’s lab includes many enjoyable and fully functional features. Some of these are a pneumatic counterweight that functions like a perfectly balanced fireman’s pole, modified nerf shooters, a self-playing piano, transformable furniture, retro arcade games, and even the world’s largest Hotwheels track.

All in all, Mark’s lab may not quite be the Bat Cave, but it certainly does have the ability to help any person get in touch with their inner child and have fun while learning. If all that, Mark still had one more surprise for viewers.

Mark revealed that he would place a special “ticket” in one of the boxes every month. This means the lucky kid that finds it gets to visit the lab and spend a day inventing whatever they want with Mark and his team.