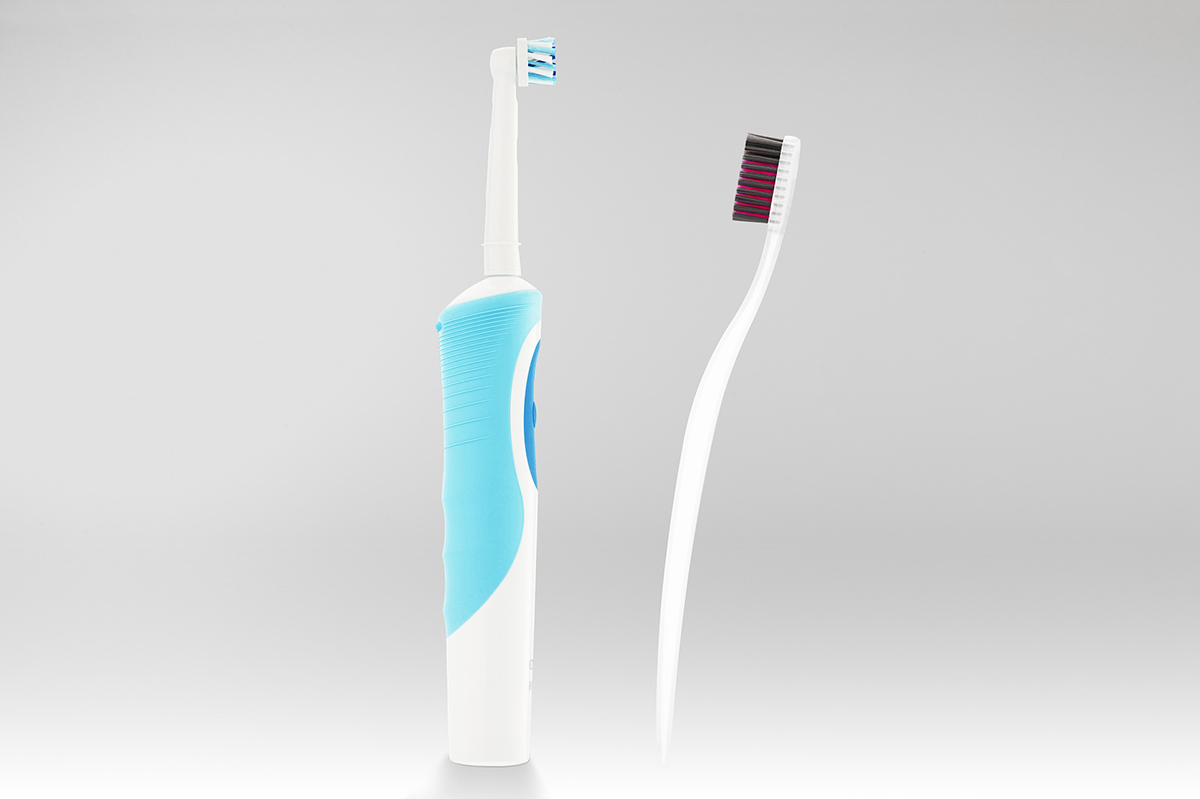 If there’s one thing that more and more people are trying to do, it’s getting healthy. Whether it’s exercising more or just eating right, people are more mindful of what they do with their bodies and what we put into them. But another important step on the road to living a healthier lifestyle is to take care of your teeth. In this piece, we will be exploring the benefits of an electric vs a manual toothbrush.

From about the time you’re about to enter preschool, there’s a good chance that your parents started to show you how to keep your pearly whites clean. So that means for a fair amount of our lives, we already have known how to take care of our teeth. But thinking back to your younger self, sometimes it was just a hassle to have to brush your teeth for two whole minutes and only stop to avoid drooling toothpaste all over the place. But as technology has improved, the electric toothbrush entered our lives.

In the following we see how electric toothbrushes got their start and why they win out in electric vs manual toothbrushes:

The History of Dental Care

Although there are many who can admit they don’t like going to the dentist, we will need to look back before we can go forward to the electric toothbrush. And that means looking at a lot of not-so-great teeth and some even scarier toothbrushes. But don’t worry, we’ll try to make this as quick and painless as possible.

Even though overall hygiene may have been questionable in the past, people have been cleaning their teeth for thousands of years. The American Dental Association dates dental care back to Egypt around 2600 B.C. Then somewhere between 500 B.C. and 300 B.C., there were records in Greece that explain tooth decay, gum disease and even how to get rid of a rotting tooth. While the tools back then may have been a little more primitive and procedures were probably a little more painful, at least we know people cared about their teeth back then.

Then move forward a few centuries, when other parts of the world implemented different ways of taking care of their pearly whites. In parts of Africa, they would use tooth sticks that somewhat resemble the toothpicks we use today. And in Europe, it was found that people would take wet rags, dip them in salt or soot (yes, dirt!) and use that to wipe their teeth. So how did the toothbrush come about, then?

The Birth of the Toothbrush

As we get closer to finding out the difference between an electric vs manual toothbrush, it’s important to see where they actually came from. According to Avery Thing, the first known “toothbrushes” were put together in China back in the seventh century. Apparently, they used to take coarse boar hair (the bristles) and put them into animal bone or bamboo (the handle). And that’s how they would be able to get the gunk off their teeth. Crest also reports that the Chinese used some kind of silver paste in order to keep their teeth sparkling.

Boar bristles were used for a while, even though many thought it was too rough for their mouths. Although the Chinese came up with the first iteration of the toothbrush, it was William Addis of England who refined the idea and created what we know as the dental tool today. According to historians, Addis figured it out while he was in jail in the 1700s for sparking a riot. After getting out of prison, he essentially started a toothbrush empire and built a brand on the handy tool. And after his death, the company transformed into Wisdom Toothbrushes, which stayed in Addis’s family till 1996. It still produces 7 million toothbrushes in the U.K. each year.

Moving forward, nylon bristles weren’t a thing til 1938—at least in Europe. The United States didn’t opt into this one until soldiers came back home from World War II. In any case, by that time, brushing your teeth and overall oral hygiene were more common practice. And now we have the option to choose between an electric vs a manual toothbrush.

Following the transition from coarse hair bristles to nylon ones in the early twentieth century, soon toothbrushes started to take on different forms. Handles would change to be ergo-dynamic with thumb rests and shaped to make them easier to hold. Then, of course, there are the bristles, which started to come in different shapes, lengths and formations. The variety of bristle styles would cater to everyone’s different oral care needs. But even though these worked for consumers over the years, it was clear that people wanted to upgrade their manual toothbrushes.

Even though there was a prototype created in the 1800s, the thought of putting some finicky electric rod-filled thing in your mouth didn’t catch on. In 1954, Dr. Phillipe-Guy Woog created the first “usable” electric toothbrush. However, with its reliance on being plugged in all the time, it didn’t become as popular. He later made a better version that gained popularity. General Electric came up with a battery-operated model in 1960, which took off in the U.S. And as the years went on, the device evolved. Now there are a variety of models that people use every day.

So what are the benefits of the electric vs manual toothbrush? In the next section, we’ll look at the various ways the electric toothbrush has become so popular.

No Longer Need to Spend So Much Effort

Remember when your parents told you to brush your teeth before you hopped into bed as a kid? You would slump over to the bathroom so you could get the job done. There were many times that we’re sure you weren’t the most enthused to do it. However, you tried to get the job done. The actual back-and-forth or circular motions you would make with the brush would just seem so tiring—and sure, lazy.

But the electric toothbrush’s quick back-and-forth motion does all the work for you. And if you went in on an actual sonic toothbrush, those devices can do 30,000 to 40,000 brushstrokes a minute. That’ll surely make it really easy to get rid of the tough plaque that’s stuck on your teeth.

Perfect for Anyone with Dexterity Issues

So it’s easy to accuse electric toothbrush users of being lazy. However, for those with limited mobility, having one of these tools is very helpful. For people who suffer from arthritis or carpal tunnel syndrome, for example, the electric toothbrush puts less stress on their hands and wrists. They will then still be able to keep their pearly whites bright without having to experience any pain to other parts of their body. And then for those with developmental disabilities, an electric toothbrush, with some proper training and practice, will help that individual brush their teeth properly. And that can decrease the likelihood of that person hurting themselves.

Keeps You on a Timer

Tooth brushing should last about two minutes in each session. If you are usually using a manual toothbrush, you actually likely have no clue how long you’ve been brushing. There’s a chance that you have been doing it for the recommended 120 seconds, but in actuality, you may have only done it for 30 seconds. Some suggest putting a timer in your bathroom to keep time for yourself. Others say to play a song and brush til the track is over. But let’s be honest; no one wants to go through the trouble of setting an alarm while brushing their teeth. And that brings another plus to the electric toothbrush, which now has built-in timers. This way, you can get your two minutes of brushing done each time and you can also avoid bringing a timer into your bathroom.

As we previously mentioned, many modern electric toothbrush heads can move between 30,000 and 40,000 strokes a minute. Now multiply that by two, and you’ve got at least 60,000 to 80,000 brushstrokes taking care of the plaque that’s building up on your teeth. Although it has been said that the electric vs manual toothbrush are pretty equal on that front, the amount of effort is far less when you no longer have to continuously move your arms around.

Aids in Getting Rid of Bad Breath

While many people tend to ignore their tongues, which are usually the breeding ground for the bacteria that cause bad breath, an electric toothbrush can help with that. Check out our electric toothbruhttps://www.top5.com/reviews/best-electric-toothbruses/shes guide if you are interested in one. The continuous motion of the brush head will be able to scrub out any excess bacteria and food remnants, and then your mouth will feel very fresh and clean.

The electric vs manual toothbrush debate is surely one that will continue. Some will keep to their manual ways, while others will adopt the electric toothbrush. Yes, both tools will help you achieve good oral health, and that means your trips to the dentist will go a lot smoother. Whichever toothbrush you decide to go with, the most important part of this is to make sure to brush your teeth twice a day. As long as you do that, you’ll be sure to have strong and healthy teeth for years to come.