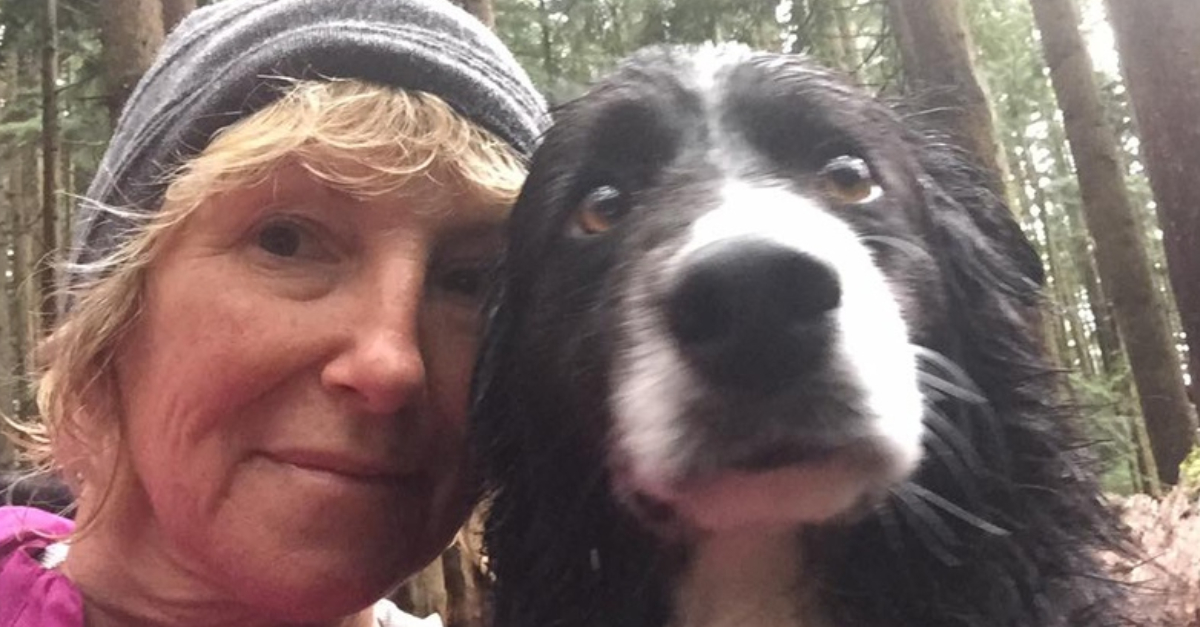 Help From Her Dog

She was starving, dehydrated, injured, freezing, and lost in the Canadian wilderness. Just when she thought things couldn’t get any worse, there was a flash of lightning and the rain started to fall.

She glanced over at her faithful border collie and noticed she was digging a hole. Then, it dawned on her that the dog was doing something that could save them all.

Retired British Columbia resident Annette Poitras had a lot to live for. She had a loving husband, a daughter, and she was well-loved in her community. She loved nature, so after she retired she decided to put her passion to good use by starting a dog-walking business.

Little did she know, the trails around Coquitlam’s Eagle Mountain that she thought she knew so well would turn on her.

It was the afternoon of November 20, 2017. Annette had two canines to walk – a pug-poodle mix named Bubba and a boxer named Roxy.

Her own border collie, Chloe, also went along for what was meant to be a relaxing nature walk in the wilderness that surrounded Eagle Mountain. And it was lucky that she did.

The dog walk began like every other. Annette and the dogs walked their usual route along the park trails, just a ten-minute drive from her home.

Annette kept a watchful eye on her canine companions as they snuffled through the leaves with their tails wagging happily. Suddenly, Bubba the pug mix pricked his ears up and made a fatal mistake.

Something off the path had caught Bubba’s attention, so he bolted away from the group. Annette yelled for him to come back, but Bubba was long gone. She had no choice but to give chase.

Suddenly, a bolt of pain seared through her back and head as she slipped on the soggy rocks. Then, everything went black.

When she regained consciousness, there were three sets of eyes staring down at her. Annette had no idea if she’d been out for minutes or hours.

She blearily looked for her phone in her pocket and, to her dismay, discovered that it was missing. She tried to move and felt pain shoot from her left armpit down to her calf. Could she get up?

Annette got up dizzily and took stock of her injuries. It felt like she’d cracked a rib. She rounded the dogs up and carefully limped her way back to the trail.

She needed to get home to see to her injuries, but then things really started to unravel. It began to rain, which made the path too hazardous for Annette to go back the way they came.

Annette was stuck. She couldn’t risk taking a chance on the trail while it was being pelted with rain, and she had no way to contact the outside world.

She decided to stay in one spot, close to where she’d fallen. The evening closed in, bringing the bone-chilling winter cold with it, but she had no choice but to stay right where she was with the dogs. Meanwhile, her husband noticed she was missing and was almost at his wits’ end.

Marcel, Annette’s husband, knew something was horribly wrong when his wife hadn’t returned by evening. He had tried calling her but nobody answered.

When the night began to fall, he called the authorities. Coquitlam Search and Rescue and the Royal Canadian Mounted Police immediately began to try to locate Annette, but time was not on their side.

A vital lead came from a man named Marc Herr when he saw Annette on the news.

He came forward and told the authorities that he had been at his car taking a smoke break when he’d seen Annette and the dogs just before Bubba had bolted off the trail. Now, they had a location to trawl, but what they didn’t know was that Annette wasn’t there anymore.

After the first night in the wilderness, Annette noticed that she was missing a dog again. She summoned all her energy to hobble over the treacherous terrain with Chloe and Roxy in tow.

Luckily, she went in the right direction and found the dog near some power lines. Unluckily, she was now well and truly lost. And it was getting dark.

Despite the search party having all-terrain vehicles, over 100 people, and helicopters at their disposal, Annette was still nowhere to be found.

They knew that, by now, Annette was starving, dehydrated, and struggling to keep her strength up. But what they didn’t know was that Annette was about to receive some unlikely but lifesaving help.

As Annette lay there injured, starving, and freezing in the relentless rain, she idly glanced over at Chloe, her border collie.

Chloe was digging a hole in the spongy moss on the forest floor. At first, Annette didn’t think too much of it. But then it dawned on her that her dog had just shown her an invaluable trick.

Chloe was cleverly digging a hole to sleep in! Annette decided to follow suit. She cleared a patch of ground and dug herself a shelter to sleep in.

Although Chloe may not have known it, she had just saved her owner’s life. By climbing into the hole in the ground, Annette was able to stay warm and relatively dry. And thankfully, help was near.

After searching for Annette for three days, the search party was growing desperate. They decided to conduct a “sound sweep” of the area by walking abreast, whistling, and calling for Annette.

“At the end of one of those segments, [a search party] heard [Annette] replying and they heard the dogs barking joyfully. She was very chatty and very happy to see the searchers, but very wet and in a lot of stress from being out in the cold that long,” Michael Coyle, who headed the search party, explained.