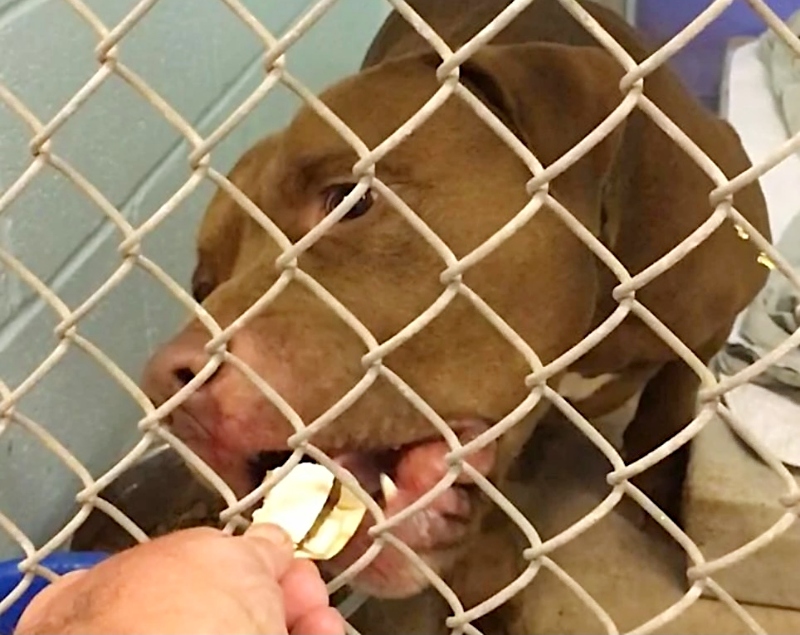 Diana was walking towards the door to her office when she saw him sitting there. His owner was just off somewhere quickly, right? But soon she’d understand the situation, no one was coming back.

She slowly walked towards the pooch. She was used to handling dogs, but she didn’t want to get bitten if she made the wrong move. Then she saw the fateful note. After reading it her hands trembled and tears rolled down her cheeks. The dog stood there with her in solidarity.

Diana Stevens always knew what she wanted to do when she grew up. It was never even a question. As she matured into a young adult, she did all of the studying required to reach her dreams, she even got to work with an esteemed clinic.

Diana had one passion greater than anything else in the world. She was an animal lover so naturally, she chose Veterinary Science as a career. Over her years of working, she felt proud at the fact she’d saved hundreds of animals. But sadly, there were ones that she couldn’t always help.

The most soul-wrenching thing for Diana was seeing abused animals come in. Some owners didn’t even know that they were bringing harm to their pets until their eyes were opened.

After her years of experience, Diana had personally seen and tried to help many abused animals. Either through unintentional neglect or malicious intent, these animals were in a sad state and it always pulled her heart strings.

Diana was a good person, but what kept her hopes up was that there were others like her – good people willing to do good in the world. Animal cruelty was far too common and Diana wanted everyone to understand how bad it was.

Diana was one of many people that care for this cause. They all try their best to help out animals that need it most. But sometimes Diana grew pessimistic and wondered if what she was doing actually had a lasting impact.

A Very Bad Start To The Day

Diana’s day didn’t start off very well. It was on the way to her work when she saw something distressing. There was a little brown dog in a cage. It was by the front doors to the office and there was no one else in sight.

Diana got closer to the poor dog. It didn’t seem ferocious at all. But when she noticed what breed it was, she knew she had to be careful.

Diana was an expert on all dog breeds, this meant that she knew some dog breeds had a bad stigma attached to them. A lot of people thought that they could be aggressive.

In Diana’s years of working, she had been taught that there was no such thing as a bad breed of dog. It was always the owner’s fault if the animal turned out that way. But she didn’t know who owned this dog, so she had no idea how it would behave.

It was easy enough to tell what breed it was. Diana took one look and could see that it was a pit bull. This is one of the breeds that gets the worst publicity associated to their aggression. But Diana wasn’t so naive.

Any breed, even pit bulls, were only aggressive if they had been treated harshly or specifically trained that way by their owners. A lot of pit bulls were tragically used in dog fighting so a lot were just programmed to be like that.

Diana slowly approached the pit bull. She used her intuition to tell if the dog was dangerous. But she trusted him, he was alone in the cage with a few toys and a blanket.

Secondly, the poor animal wore a doleful expression. It was the strangest thing, but it seemed almost human-like. To Diana, the expression reminded her of one a person might wear after having their heart broken.

It was very early, Diana wondered how long the poor dog had been left there. The vet had only just opened, people sometimes did bring their pups in this early, but there was no owner in sight.

She even took a minute to look around the corner and in the parking lot, but there was no one around. She felt anxiety rise up in her chest as she started to understand the situation.

Diana checked inside. A few of her colleagues were already there, but no one had seen anyone drop off a dog. The entire incident seemed stranger by the second now.

Diana checked their appointments, but there were no dogs due to be brought in that early. Diana waited with the dog, but no one arrived to claim him. Diana was devastated when she realized the truth.

With a heavy heart, Diana realized that the dog had been abandoned. Diana was furious and was already sure that the owner was probably some negligent person that did not want to care for the poor animal.

She took it inside, where her colleagues tended to it. Just then, Diana noticed that the dog also had a note in the cage. As she read it, her eyes filled with tears, and she realized exactly why it had been abandoned.

The note explained the dog was affectionately known as Fatty McFat by its previous owner. Tragically, its owner had gone homeless after Fatty had bitten someone and was forced to give up the dog.

The note went on in sad detail to say that the owner had tried to get assistance from many people. No one wanted to help and it broke her heart to give up Fatty. However, she was left without hope as they had been living out of a car for two months.

Knowing the true story behind the beautiful dog, Diana and her colleagues knew they had to help. Fatty was treated, fed, and cared for.

In the meantime, the clinic began searching for rehoming options. Initially, things seemed bleak as Fatty was a little aggressive, primarily out of fear.

Thankfully, the Simon Foundation, which specializes in the rescue and rehabilitation of dogs and cats, stepped in to help.

With their help, Fatty was soon doing better and even being trained to be less aggressive. After a while, the Foundation wrote back to the animal clinic to give them some huge news.

Remarkably, the foundation was able to track down Fatty’s owner. While they housed and cared for her, Fatty’s human stayed in contact with them.

One day, she came calling with the news that she had managed to find a new job and finally had a home to live in again. Fatty and his human were finally able to have a very special reunion.