Array ( )
Top5 » Trending » Amazing Facts » Do You Know the Hidden Logo Facts Behind These 15 Famous Brands?

Do You Know the Hidden Logo Facts Behind These 15 Famous Brands?

Have you ever looked at a cup of Starbucks, the back of your iPhone or the menu at the McDonald’s drive-through and wondered, “What do these logos really mean?” If you’re a natural-born curious mind, you probably have wondered about the origins of your favorite brands’ logos and tried to come up with logical interpretations to the most peculiar ones.

We’re here to help you on your quest with 15 logo facts you absolutely need to know, so that next time you order a frappucino, you know why the long-haired lady behind the counter is mysteriously smiling at you!

Check out these 15 fun logo facts:

If only all triangles were made of chocolate. The popular chocolate bar is a favorite of many, and its logo story will make you even fonder of it. At first sight, you can notice the outline of a mountain, but upon further observation, you will spot a bear facing sideways nestled within the mountain.

The mountain symbolizes the Matterhorn Mountain in Switzerland, near Bern, the city where Toblerone is based, also known as the “City of Bears.” That’s a great way to remind everyone about the origins and roots of the brand.

The McDonald’s logo might be the one that caught us by surprise the most!

Whereas the golden arches do stand for ajolly M, they also hide a subliminal message: boobs. Yep, you read that right. In the 1960s, Louis Cheskin, a design consultant and psychologist, was hired by McDonald’s to help them rebrand their logo.

That’s when the genius of Cheskin revealed itself, as he convinced the company’s executives to opt for breast-shaped arches, in order to initiate a subconscious response in the minds of consumers.

McDonald’s will never cease to surprise us.

From a simple online bookstore to the world’s one-stop shop for any conceivable item, Amazon changed drastically from 1994 to now, and so did its logo.

First, let’s take a look at the company’s name itself. When Jeff Bezos first founded his company, he decided that the name should definitely start with A, the first letter of the alphabet, and include a Z, to represent the wide selection of books he would be selling. The word “Amazon” fit the criteria, in addition to reminding the reader of the largest river in the world, thus making it more powerful. Two birds with one stone!

And he made sure to show the symbolism in the logo, with an arrow pointing from the A to the Z that also doubles as a smile for a warmer feel.

You think FedEx’s logo is too simple to hide any secret message? Think again, for this seemingly normal logo has won over 40 awards worldwide since its creation on 1994.

Designed by Linden Leader of Landor Associates, everything about it suggests speed and precision, from the tightly joined letters and erased space between the “d” of “Fed” and the “E” of “Ex” to thesubtle arrow in the white space between the “E” and the “x.” Have you noticed it before?

Beats by Dre’s products have always sparked heated debates when being launched to the public, especially for their high prices. But there is another important element that doesn’t come out often in the discussions: the logo.

At first glance, a “b”is clearly outlined in the red circle; however, Dr. Dre meant more than that. The circle actually represents a head facing sideways, wearing headphones, as represented by the shape of the lowercase “b.” The color red also suggests energy and passion. Smart, right?

Nike’s swoosh might be one of the most famous logos out there, but the story behind its creation is quite unexpected.

Back in 1971, when cofounder Phil Knight wanted to create their brand’s logo, he commissioned graphic design student Carolyn Davidson to do the job. However, the founders didn’t really like it and only paid $35 to it. Knight even supposedly said: “I don’t love it… but I think it will grow on me.” Little did he know, the logo did more than grow on him, it became adored by millions of people around the globe.

Oh sweet ice cream gods, Baskin Robbins is a brand we’re thankful for. Have you ever wondered why there are two colors in each of the letters of the BR logo?

The colors and dynamic font are “meant to convey the fun and energy of the Baskin Robbins brand.” But there is more to that: The logo is hiding the number “31” under the promise that customers can enjoy one different flavor for every day of the month.

Wouldn’t that be ideal?

Bring out your cycling gear, we’re going to France! The current Tour de France logo was designed in 2003, and we love the dynamic lettering it features.

We mostly also like the meaning behind it, or more especially the “Tour” part. Focus on the “r” and you will discern the shape of a hunched cyclist, with the “o” serving as one of the bike tires. The yellow circle is a reminder of the yellow jersey that winners of the Tour de France wear.

This is one of the logo facts that has been unveiled only recently, and you will soon know why.

Vaio by Sonic is one of the strongest and most compelling logos designed in our era. It was created by Timothy Hanley, who masterfully integrated the ideas of analog technology(represented by the waves of “V” and “A”) and binary technology (represented by the “I” and “O,” as in 1 and 0).

A stroke of genius.

Where do the dots of Domino’s come from? Why did the pizza-making company chose this name in the first place?

Before being a multimillion-dollar company, Domino’s started off as DomiNick’s, an independent pizza restaurant founded by Tom Monaghan and his brother. (Fun fact: Tom bought off his brother’s part of the business in exchange for an old Volkswagen Beetle!)

In 1965, three stores were available, thus the three dots in the current logo. But Monaghan wanted to add a dot for every store he opened, which became inconvenient. He clearly didn’t foresee the huge success of his brand and delish pizzas, so he dropped the idea later on.

What happens when two teachers and a writer found a coffee bean business? They obviously take literary liberties and name their venture after a fictional character from Moby Dick: Starbuck.

But who is that eerie long-haired lady staring at you from every Starbucks frappucino cup? And what is she holding in her hands?

Since the founders went for a nautical theme in the company’s name, the founders chose to feature the most seductive imagery of the sea, a siren. If you’re imagining a pretty mermaid from a Disney movie, you will be disappointed. The siren featured was bare-breasted with a gloomy look on her face and was holding her two tails in her hands. To keep it public-friendly, the company decided after a while to alter the original logo but keep its spirit.

The company’s founder, Enric Bernat, approached Salvador Dali to design a new Chupa Chups logo. The artist incorporated the lollipop’s name into a bright daisy shape and even advised Bernat to keep the logo on top of the wrapping paper, and not on the inside so that it wouldn’t be damaged and would be visible no matter which side you look at it from.

Seems like Salvador Dali would make a brilliant marketing advisor.

The bitten apple on the back of your iPhone is probably one of the most well-known logos of our times. So many speculations have been given to explain its meaning, and countless conspiracy theories have been formulated to unveil its origins.

Does it represent knowledge after the biblical Adam and Eve story? Is it a tribute to Alan Turing, one of the pioneering scientists of modern-day computing, after he bit into an apple laced with cyanide? Does it find its roots in the fruitarian diet—a subset of veganism—that Steve Jobs adopted for a while?

Unfortunately for Apple fanatics out there, none of these theories has been confirmed as the true story of the famous logo. Don’t expect any fabulous backstory for the big tech giant’s logo; it may turn out to be plain and simple.

Those waves you see on Cisco’s logo don’t actually stand for electromagnetic fields, as many have believed in the past.

They are actually a rebranding of the icon of a bridge: the Golden Gate bridge. Cisco’s founders founded the company in 1984, and since they were from San Francisco, they chose the shape of the famous landmark of their city as part of their brand.

That’s what we call city pride!

Apart from being absolutely fabulous, NBC’s peacock logo isn’t just there for its pretty looks.

NBC didn’t have a logo at first since they were mainly a radio station. When they moved to television, they chose many different logos, but none of them stuck—until this one. It featured a peacock proudly flaunting a colorful plumage.

Why is that? The logo facts here are simple: They wanted to spark the curiosity of viewers who still watched TV in black and white by showing them they could instead watch quality TV content in full color. Smart!

What do you think of these logo facts? Do you know any other random logo facts that should be featured on the list? Let us know in the comments, and for more bizarre news, make sure to read the next article on the history facts our teachers forgot to teach, but that would have made our lessons a thousand times more fun! 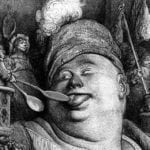