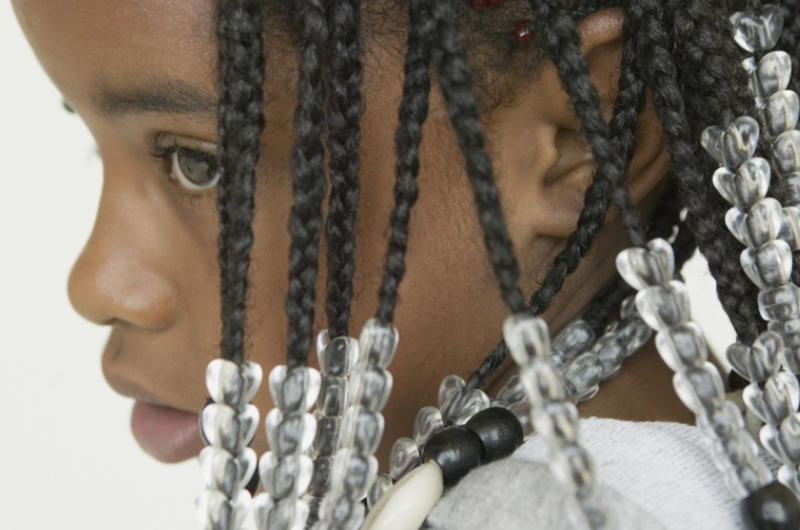 They could clearly hear them even from the sidewalk. That meant that the poor little girl could hear the harsh words too.

The braids severed and fell to the floor, the sound of beads bouncing off the ground could be heard. She couldn’t believe it, she was crying because of what they did to her – she was stuck in the middle of a battle between her parents.

Chase stood in the door to the Alabama daycare door and called his three kids’ names. They ran to him, surprised by his visit.

He just wished he could see them more. He picked them up from the daycare and drove them to the hairdresser for a special treat. Or so he thought.

He wanted to try and differentiate himself from the stereotype of deadbeat dads. He wanted to give his daughter a special treat.

She chose to have adorable braids in her hair. it was clear that she loved it. But her father would soon find out that her mother couldn’t be happy.

While he was driving his kids home he noticed something about the braids – they were a little tight.

Would that be a problem? Chase smiled at his daughter and thought “We can just unbraid it later if it’s not right.” But he had no idea what would happen.

But when he got to the driveway her mother, Maliyah, came storming out of the house.

She looked at him as if he had committed murder. No matter how cute he thought it was she just kept screaming, “I didn’t give you permission”.

The basic reason for the lash-out? The mom hated that another woman did her girl’s hair and the father didn’t ask if it was okay.

Chase did his best to control his anger, but her nasty words were already falling on little ears. The kids looked to both parents, confused about what was happening. What happened next, he couldn’t believe it.

Maliyah stomped into the house and came out with a pair of scissors.

She roughly grabbed a fist full of braids and started chopping them off. Beads fell and bounced on the ground. The tears that fell from the tiny girl’s eyes now streamed in full. The pain and fear on her face were clear.

Chase tried to step in, but the woman was in a rage and had something sharp.

He told her to stop, but it only made her reaction more volcanic. Braid after braid got snipped until there wasn’t anything left but ragged leftovers sticking out of the girl’s head. Maliyah then threw the scissors at Chase.

There the fractured family stood. The ex-wife screaming, his kids crying their eyes out, and him helpless to do anything but film the scene.

He had plans to get full custody and, hopefully, this would help. As the mom dragged the kids away, the only way he could step in was to go home and post the video. Reactions started to pour in, including from mom.

His side was simple. He wanted to do something nice for his kids. However, the mom’s side started to unravel in a toxic, fuming war on the father.

Chase felt the worst stab when he saw a new video from Maliyah. What she said was unbelievable and the core of her actions would be unforgivable.

“I’m not gonna lie. It was cute,” she said. Chase had to walk away from his computer before he punched it.

The traumatic event was purely to get back at Chase and hurt him, through hurting their girl. But the mom wasn’t going to end there, she was about to drag others into her sights.

The unapologetic fury continued as she criticized and cursed the person who did it – that it was too tight and the girl’s skin was bulging around the braids.

The internet exploded back. The video had already gone viral, but the public wasn’t going to sit back and let her get away with it. They let her have it.

“Why didn’t you just unbraid them?!”, “You’ve traumatized your kid. Things like this can affect them forever”, “What does this do to the child’s spirit?! That is abuse!”, “I will pay for your lawyer, man.”

And while most people would have been quiet, Maliyah decided to double-down and send out more livid responses.

Her return punches went from defending what she did and throwing curse-laden insults, to disabling the comments on her social media, and then opening them up again for another wave of digital assault.

One final comment brought another aspect into the limelight.

The woman had been complaining she needed a job.

So, Chase had saved her money and time. She could have used that as a temporary break and chance to job hunt, but she chose the toxic route. The father stared at his screen and typed a message to his kids. He was going to do everything he could to save them and bring them into a safer home with him.